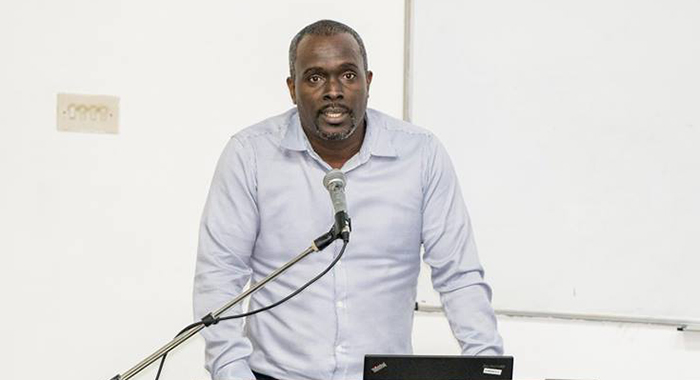 Public servant Phillip Jackson has announced his intention to vie to be the opposition New Democratic Party’s candidate in Marriaqua in the next general elections. (Photo: Facebook)

A 44-year-old public servant and PhD student, on Sunday, announced his intention to vie to represent the main opposition New Democratic Party (NDP) in Marriaqua in the next general elections, expected by year-end, ahead of the March 2021 constitutional deadline.

“After much consideration, I am very convinced that this is the time for me to vie for representation in Marriaqua, home of my birth. So I am vying to be the NDP’s candidate for Marriaqua in the upcoming elections,” Phillip Jackson told iWitness News.

“I believe that the direction of the country, its governance, the level of political division is such that we need to make an intervention and change the course of our political history and I am very convinced that the time is now and I believe I have a role to play,” said Jackson, who is the Science and Technology Coordinator in the Ministry of Economic Planning.

Jackson, a resident of Glenside Village, Mesopotamia, told iWitness News he thinks that he has the passion, ideas and ability “to bring people together over ideas to drive Marriaqua forward.

“And I am capturing it in the mantra Marriaqua on the Move (MODeM), because the modem is a metaphor for connecting with people around common ideas for their own interest and I think with that approach we can make a difference not just for Marriaqua but for St. Vincent and the Grenadines.”

Jackson told iWitness News that he knows that Curtis Bowman, a pharmacist, who represented the NDP in 2010 and 2015, losing on both occasions, is still interested in another turn at the poll.

He said there is also Bernard Wyllie, who was MP for the constituency from 1989 to 1998, under the NDP, is very interested in making a comeback.

In 1998, Wyllie lost to the ULP’s Girlyn Miguel, who represented Marriaqua until 2015, when she retired from politics.

Jackson also told iWitness News that chartered accountant Kirk Da Silva, who in 2015 was vying to be the ULP’s candidate but lost to St. Clair “Jimmy” Prince, the current MP, is also interested in representing the NDP in Marriaqua at the next poll.

“People are excited about coming forward for the NDP and that’s great news… That’s a tremendous credit to the NDP that so many people of calibre and worth are trying to represent the NDP. And I am putting myself forward at this time because I think it can make the difference in Marriaqua.”

Jackson told iWitness News he thinks that all the other potential candidates are persons “of merit and competence”.

He, however, said he “can bring people together over deep ideas about development.

“And I believe I can reach across different divides to bring out the best in our people and create the mechanism for an inclusive and collective approach to development in Marriaqua.”

He said that for many years, people have been calling for him to enter politics, saying they believe he has the “skills, the temperament, the acumen”.

“I am very humbled by those assertions by people over the years. But I would say I believe I can bring together winning ideas with a winning team and energise Marriaqua to the extent that we can have a really strong movement toward development, not just economic, but socially and in many other ways.”

Jackson said he believes that the current MP “is a good person but he is not, as far as representation and passion for the development of Marriaqua, I don’t see that. I have not seen that at all.

“That is absent and it is unfortunate because Marriaqua is gifted with so many diverse resources, which, if brought together properly, with its human resources, can do great things together.”

Jackson has a background in science, technology and innovation policy and is pursuing a doctorate at the Sir Arthur Lewis Institute for Social and Economic Studies, UWI, Cave Hill Campus.

His research area is “The Digital Economy, Digital Trade and the Prospects for Small States Economic Development”

“I am in a cutting-edge area. I am researching in a cutting edge area that may be described as the digital economy and the prospects for small states development. It is very timely area of research, very pertinent to our development prospects and COVID-19 confirms exactly that.”

Jackson said this is an area in which he is very interested.

“I have worked along with different regional institutions, including the Eastern Caribbean Central Bank. In particular, I have been to the World Bank in Washington with the ECCB to discuss this topic for the Caribbean. So it’s a really relevant area and it is something that I really want to finish, but as far as politics go, I think this is the time for me to say, ‘Hello, I am present. And I am standing up.”

Jackson also holds a Master of Science degree in innovation management and entrepreneurship from Manchester Business School in the United Kingdom.

He also holds a Bachelor of Science degree in biological sciences from Universidad de Oriente, Cuba.

Jackson is a Seventh-day Day Adventist. He joins fellow-faith members, Deputy Prime Sir Louis Straker and government senators Deborah Charles and Minerva Glasgow in the politics arena. Charles lost in 2015 in West Kingstown, while Glasgow, a newcomer, is tipped to represent the ULP in South Leeward.

iWitness News noted that there are a number of  Seventh-day Adventists in politics or trying to become involved, and asked if this played a role in his decision and whether he thinks this would affect the outcome, if he emerges as the candidate.

Jackson said that his faith did not influence his decision to get involved “except to say that maybe my Christian upbringing has sensitised me in a meaningful way to issue of social justice, development, and so on.

“So, in that regard, there is an indirect influence.”

He said that his late father was an avid political supporter of Wyllie and was “like a father mentor to him”.

“Back in 1989 when Bernard entered the ring, that was mainly due to the influence of my father. So in the regard that my upbringing has exposed me and sensitised me to issues of social development, social justice, it would have influenced this decision indirectly, but the way you frame the question, it did not. It did not come into this decision.”

Jackson, who is “unmarried”, is father of three daughters and two sons, aged 3 to 25 years.

9 replies on “Public servant wants to represent NDP in Marriaqua”