SVG mulls banning flights from US over COVID spike 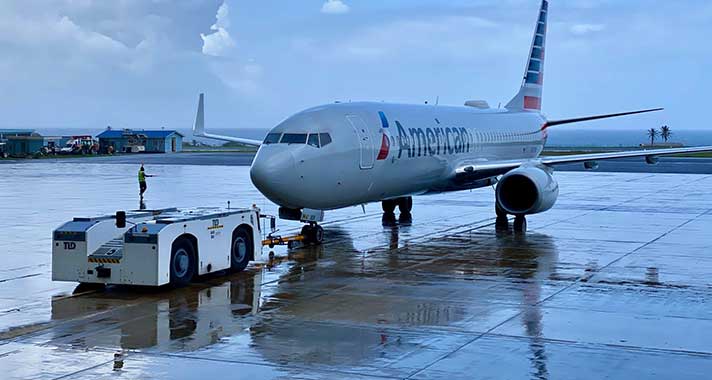 St. Vincent and the Grenadines is considering discontinuing flights from the United States after recording 12 cases of COVID-19 associated with the first international flight to the destination since March and four cases in relation to the second flight.

Of the 12 cases associated with American Airlines flight 945 — which brought 155 persons to the destination on July 11– one person was not a passenger on the flight.

Another AA flight, also from Miami, arrived on Saturday, and health officials said late Sunday night that four cases of COVID-19 were detected among the passengers.

The National Emergency Management Organisation (NEMO) said on Sunday there were 21 active cases of the respiratory illness in the country, including two cases, the origins of which health officials were unsure about and were investigating.

SVG has recorded 50 COVID-19 cases, with 29 recoveries and zero deaths.

“But I want to say this, as of Saturday July 25th, the flight which is coming on Saturday coming up, the protocol is going to be strengthened so I want everybody to have real advanced notice. The Chief Medical officer has sent me already, she had discussed with me, and she is saying all the passengers must arrive with a negative COVID PCR test result.”

Hitherto, persons arriving in SVG with a negative result from a PCR test conducted three days before their arrival underwent no quarantine.

All other persons underwent 24 hours’ quarantine while awaiting the results of their test, which was extended if they tested positive.

But Gonsalves said that come July 25, all passengers must arrive with a negative COVID-19 PCR test result.

“They must arrive with a proof of reservation in an approved hotel by the Ministry of Health for five nights,” he said, citing the new protocols.

Further, passengers will be tested for COVID-19 before they are released from the Ministry of Health-approved hotel

Their quarantine will continue for nine to 16 days in an approved home or a government approved facility after the five nights in a hotel.

In this way, all arriving passengers will be required to remain in quarantine for 14 to 21 days.

“The importance of strict compliance to all isolation and quarantine orders is paramount because it is only by complying with these orders and the use of masks in public places that the spread of COVD-19 can be controlled in St Vincent and the Grenadines.”

He said that the Ministry of Health and his government is “privileging persons who are our citizens who want to come home, who have been out there for a long time”, adding that only a few non-nationals arrived on both the July 11 and 18 flights.

The prime minister said that returning nationals including persons returning for funerals, persons who were in isolation and wanted to come home, “some were cruise people still coming home, some were oil rig workers, some were students, some were people who had gone away and got stuck and we say we have to facilitate you in coming home.

Gonsalves said that Kingstown, however, would continue to allow flights from Canada.

He said his government only agreed to allow the flight from the United States next Saturday “because people have come here and they left their jobs with the expectation that the flight will go back and others will come and will go back.

“Well you have the 25th, to make sure you have your booking because you can’t be sure that we will not suspend the flight for the first weekend in August — the first Saturday. Because persons have not been paying attention. I just want to make this point with crystal clarity…

“We are very much privileging our citizenship,” Gonsalves said, adding that someone had commented that he wants tourists to come to SVG.

“The truth is this, the tourists are not coming yet. Small numbers, but we are doing this for our nationals because I am very concerned about you being out there but you can’t come but whatever the health people tell you and they give you a document as soon as you come out, you go on a boat and you go to Bequia, you take off your mask and you start to be drinking with everybody at the bar.

“When you do that, apart from the question of moral suasion becoming less and less as a tool, you still have to do it, but the law has to be enforced. And if in the United States, we are still having this increase, we will have to stop the planes coming from the United States for the time being…”

He said that Barbados had four JetBlue flights, but has reduced it to one a week.

“Because we have to look at the capacity of the epidemiological apparatus that you have, the health workers on the ground to deal with it and very much so, we have to be concerned about the health and safety of those persons who are in St. Vincent and the Grenadines,” Gonsalves said.

The prime minister said he understands that some people go to the bar at the airport as soon as they arrive in the country.

“I can’t understand it. And you are coming from a high risk area,” he said, noting that persons from the United States cannot travel to Canada.

“So that we have been dealing with this matter in a practical manner, in a practical way and so forth but I have always said that where we have to ramp up restrictions we will ramp them up. And if you want to get home and you can’t get home, you will have a problem because the flights are in danger of being suspended because of this unacceptable conduct.

The prime minister said that some persons who arrived in the country with a negative PCR result have since tested positive.

“We have to do this because of the way some persons have been behaving and, critically, because of the recent upsurge in the United States, particularly in Miami and I don’t think anybody would disagree with us toughening up on these things.”