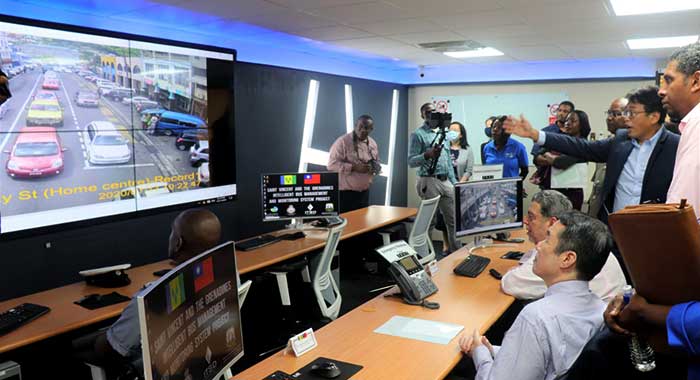 Prime Minister Ralph Gonsalves, Taiwan Ambassadors Calvin Ho and Minister of Technology, Camillo Gonsalves are treated to a demonstration of the system.

Crime fighting and public monitoring in St. Vincent and the Grenadines (SVG) went high-tech with the inauguration, on Tuesday, of the Taiwan-sponsored E-Bus and Security Operation Centre, located at the Questelles Police Station.

Commissioner of Police, Colin John, welcomed the development, saying, “I am very proud and today is a happy day for me.”

He said he now has “an important piece of tool in the police arsenal so that we can fight crime. We also have trained persons who can handle this piece of tool and who can assist in making St. Vincent and the Grenadines a safer place.”

The project also includes the installation, so far, of more than 100 full HD cameras in Kingstown and on the leeward side of St. Vincent and the intelligent video surveillance system.

Before the end of this year, camera settings on the windward side of St. Vincent will be completed and will bring the number of cameras to 200.

Meanwhile, John said there are several advantages to be derived from the initiative.

“The fact that cameras are placed at several locations throughout St. Vincen and soon will be in the Grenadines, that will help to deter would-be criminals from committing crimes.”

He said that the system was also monitoring mechanism for the police force.

“So we can divert our resources to quote-unquote hotspots or areas where activities are taking place, for instance at carnival times or time when there ere events of mass gatherings.

“The persons who are observing the cameras can observe what’s taking place from a particular room so we will be able to divert our resources to deal with situations where they arise,” John said.

The police chief said that the force will also be able to collect t cogent evidence.

He noted that Director of Public Prosecutions, Sejilla McDowall was at the event, adding that information collected by the surveillance system could be tendered as evidence in court.

“This will also help in the decision making of the court so that with the cogent evidence, the tribunal would be able to make a better decision when deciding on a matter.”

He said that another advantage is the ability to record data and have it stored for future reference.

He said that other initiatives include the apprenticeship programmes, in collaboration with the Ministry of National Mobilisation, where persons are trained under the YES Programme.

“These persons were trained at the Police Band Room. To date, we have about 25 persons who have graduated and who have become full-fledged police officer. That’s a win-win situation between the Government of St. Vincent and the Grenadines and the Government of China on Taiwan,” the police chief said, adding that 30 persons are currently enrolled in the programme.

He said that last year, the police force benefited from eight SUVs, donated by Taiwan, that are helping in crime fighting.

“Currently, there are two motorcycles at the Customs to be cleared. They were also donated by the Government of the Republic of China on Taiwan,” he said, adding that Taiwan has also sponsored the police children’s Christmas party.

And, Ambassador Ho he was proud to join with Prime Minister Ralph Gonsalves to launch E-Bus and Security Operation centre.

“The project reflects Taiwan’s continuous efforts to assist our diplomatic allies on the economic and social development. Taiwan government promises to continue using our experiences to assist St. Vincent and the Grenadines on becoming a Smart City, E-government, and to improve the governmental services,” the envoy said.

“I am confident that this project will bring huge positive impacts and fruitful results, and look forward to further cooperation between our two nations.”