Preacher gets 30 years for raping child 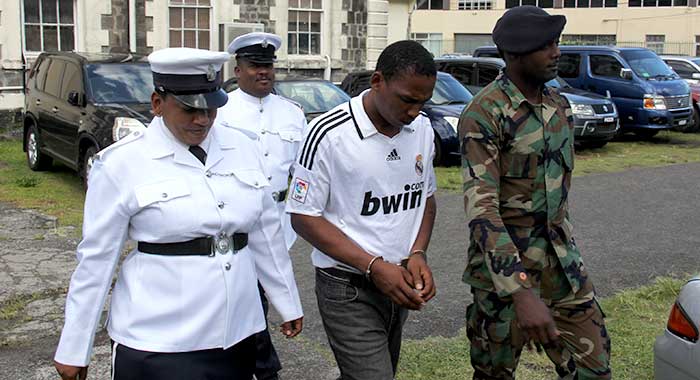 An assistant pastor was, on Thursday, jailed for 30 years  — a life sentence — for raping a female member of his congregation three times when she was between age 5 and 7.

Delroy Fraser, 43, faced a maximum of 30 years on each of the three counts of rape that a nine-member jury, which included six females, unanimously convicted him of the crime last week Tuesday, July 14.

He was convicted after a trial in which he opted to not testify and called no witnesses in his defence.

Instead, he relied on an interview with the police in which he denied having committed the offences.

Fraser, who is originally from Barrouallie, was the assistant pastor at a church where the child and her mother fellowshipped in Canouan.

He committed his crimes against the child when he took her — along with his own infant daughter — to the beach with her mother’s consent.

Fraser would place his own child on the beach when he took his victim, now 11 years old, into the sea where he performed the vile acts on her.

The child told the court that as she grew taller, Fraser took her further into the sea to facilitate his sex crime.

In the trial, the court heard that Fraser was a close friend of the child whose mother trusted him to take care of the child during their beach trips.

Fraser had threatened the child, telling her that something worse would happen if she told anyone.

Even during the period when he was violating the child, Fraser visited her house where he would sit, eat, laugh and interact with her family.

However, one day, during a sermon, a preacher prophesied that someone on the altar would be exposed.

This gave the child the courage to report the crime to her mother.

Fraser was invited to respond to the child’s claim but did not explicitly deny her allegation.

The pastor reported the matter to the police who launched an investigation.

As part of the investigation, a medical examination of the child’s vagina found signs of “significant physical trauma”, Justice Brian Cottle said in summarising the fact of the case.

The signs were consistent with sexual assault multiple times over a protracted period.

In his sentencing remarks at High Court No. 1 in Kingstown, Justice Cottle said that at the trial the child impressed the court “as a very intelligent, articulate young lady”.

He said he hopes and prays that “the almost unspeakable crimes which she has had to endure would not destroy a person who shows so much promise at such an early age”.

In a victim impact statement, the child told the court that she had been shattered emotionally and has had to endure the suffering for such a long time partly because she feared for the safety of her mother.

She said that she had contemplated suicide, having had to endure graphic flashbacks and nightmares.

The experience had forced her to lose trust in all men, the victim said.

Justice Cottle noted that Fraser knew that the child was growing up without a father in her household, adding that Fraser should have been filling that role but, rather, abused her in the worst way possible.

The judge said that in addition to the child’s physical and psychological scars, Fraser assaulted her spiritually as she spent a lot of time in church and her faith is important to her.

He said it was largely because of the child’s faith and the support she has received from her church community that helped her to overcome the impact of Fraser’s predatory behaviour.

“By violating her, the prisoner robbed her of her innocence,” Justice Cottle said, adding that the child had suffered a grievous wrong which can never be corrected.

In analysing the aggravating features of the case, the court noted that the complainant was between 5 and 7 years old, three decades younger than her assailant.

Justice Cottle said he found that the case involved extreme physiological harm, adding that because of the age difference and the fact that the child was less than 10 years old, he placed the offence in the high category — in that it resulted in extreme psychological harm.

He also said that there was abuse of trust, noting that Fraser was a family friend and the assistant pastor at the complainant’s church.

The court found that there was a degree of planning in the assaults and that the child was also threatened.

He noted that the crime was carried out in the presence of the defendant’s young child.

Justice Cottle said that while the defendant’s child was young, the child would have appreciated that something strange was befalling the complainant.

The court also found that the complainant was especially vulnerable, in light of her age.

The court concluded that the aggravating feature of the crime outweighed the mitigating features, and adjusted the starting point of 20 years upwards by three years.

The judge deducted one year for the mitigating features of the offender, he being a first time offender.

He said that the sentences for count two and three were significantly lower because of the totality principle, which says that the total sentences should reflect the overall criminality.

14 replies on “Preacher gets 30 years for raping child”