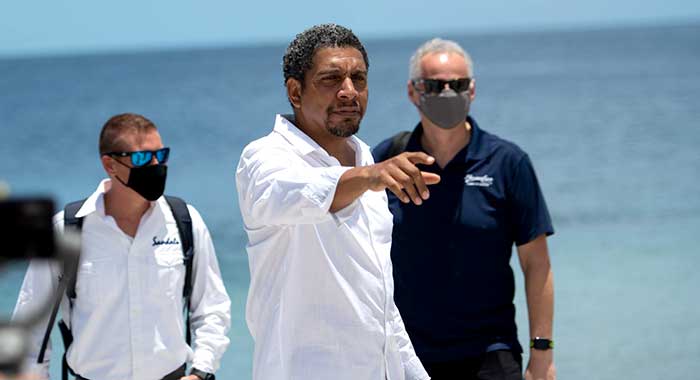 Minister of Finance, Camillo Gonsalves says that despite the suggestion of some, the government can, in fact, acquire lands and sell it to developers for a hotel project.

“I heard one or two people trying to suggest that the state cannot acquire land by virtue of its land acquisition act for the purpose of hotel or tourism development or to on sell to a private entity, and nothing could be further from the truth,” he said on WE FM on Sunday.

He was speaking in the context of the Unity Labour Party government’s acquisition of Buccament Bay Resort and nearby farms for sale to Sandals resort.

“This is a matter that has been litigated extensively in the OECS and throughout the Caribbean,” said Gonsalves, who is also a lawyer.

“And the courts have said, ‘Look, there are a number of public purposes involved here. There is a creation of jobs; there’s the boosting of the economy; there’s a turning of a dead asset into a live asset; there’s increasing the tax base and so on and so forth and all of the all of the spill over characteristics.’

“So the courts are absolutely clear, that if you acquire land for the purpose of tourism development and you then pass that land onto an entity that is equipped to develop the land in that way, that is a legitimate acquisition,” Gonsalves said.

He was asked to respond to a Bloomberg report last September that the Sandals group was up for sale and should fetch about US$4.5 billion.

Gonsalves was asked about the status of that purported sale and any implications for Sandals’ activities in St. Vincent and the Grenadines.

Gonsalves said he knows that a lot of people are stopping with the Bloomberg report in 2019.

“If you go back to 2017, I believe, there’s a Forbes or Wall Street Journal reports of a similar thing. There’s a report in 2012 or 13, saying that the Beaches brand was going to be spun off from the Sandals brand.

He said that when his government makes an agreement with a company, “we don’t tell them that they can’t continue to do business otherwise”.

Gonsalves said that regarding the sale his government did not “see that there’s any real likelihood of anything imminent in that regard”.

“But we believe that if it were to happen at some point in the future, they’d be obviously selling it to another entity that deals with hotels,” the finance minister said.

“And furthermore, we have placed in our contract with them certain guarantees to protect the government if the property was to be flipped in some way that wouldn’t be used to develop it as a hotel source.”

The government has not disclosed the details of its deal with Sandals.

Gonsalves, however, said that regarding the speculations about a possible sale of Sandals, his government takes those things “in stride”.

“There’s always speculation about large companies wanting to sell. That’s not an issue for us. Our issue is: will there be a viable asset on the ground? Will it be hiring Vincentians? Will it be using Vincentian produce and giving a steady source of income to farmers and fisherfolk?

“And we don’t bother ourselves with this speculation. But I’m not sure if there’s any truth to those rumours. I’m not sure if anything would be continued to be viable post-COVID in that regard, because what we see is a company that’s trying to expand, that’s trying to develop new facilities and is investing 100 million US dollars in developing a new facility,” said Gonsalves, who negotiated the deal with Sandals.

“That doesn’t look to us look like a company that is looking to sell or to get out of the business of hotel development,” he said.