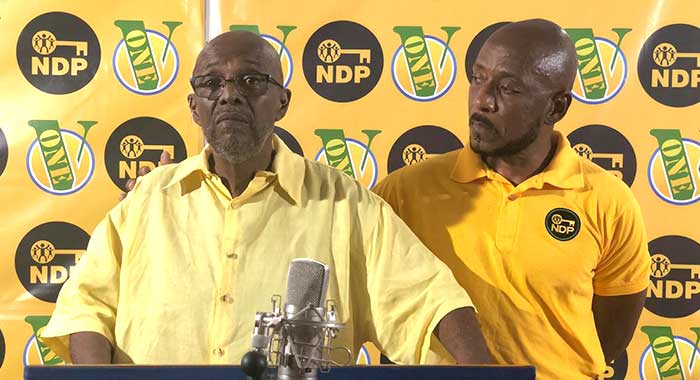 New Democratic Party (NDP) candidate for East Kingstown, Fitzgerald Bramble has told Arnhim Eustace, who he hopes to succeed as MP for the district, that he would represent constituents in the way that they deserve.

Bramble, an economist, former diplomat and national footballer, made the pledge during the NDP virtual campaign event last Thursday night, his first in-person political speech since returning a few weeks earlier from Canada, where he was based for years.

“I want to tell you and you know, that I’ve always, I always admired you. You’ve mentored me from since you were fiscal advisor, Minister of Finance, Prime Minister. And we have always had a very unique relationship,” Bramble said, speaking after Eustace, who endorsed him as his successor.

Bramble spoke of a book, “Who Moved My Cheese” that he had given to Eustace a number of years ago.

“But there’s a better gift that they have for you. And that gift is to take the baton that you just passed to me and continue to represent the people of East Kingstown the way that they deserve to be represented,” said Bramble, a first-time candidate.

“I will never attempt to fill Mr. Eustace’s shoes. It’s impossible. But what I will attempt to do and I’m quite sure that I will be successful, is to follow in his footsteps,” he said of the former prime minister and minister of finance who has been battling problems with his knees for more than a year.

“Mr. Eustace has served our constituency and this country with distinction, with honour, with integrity, and with humility. And for 22 consecutive years is not an easy feat. It shows true character, because if you can maintain those characteristics consistently, without wavering for such a long time, you know that that’s genuine, you know, that that’s character and you know that is not fake.”

Eustace has been representing East Kingstown since 1998 when he first entered politics.

Bramble said East Kingstown was the model of community life in St. Vincent and the Grenadines in the areas of sports and culture.

The district is home to some of the greatest footballers the country has ever produced, including the Millingtons, the Trimminghams, the Ballantynes, the Walkers, and the Small brothers.

He said that East Kingstown produced Cornelius “Cornie” Huggins the Vincentian footballer who has enjoyed probably the most celebrated professional international career, he said.

Bramble further said East Kingstown has produced track and field style stars like the James brothers – one of which is Tyrone James, general secretary of the NDP.

In cricket, East Kingstown produced a world record holder in the person of Winston Davis, and Michael Thaddeus Findlay, one of the best wicket keepers, and Manning Jackson, one best batsmen to ever play the game, Bramble said.

East Kingstown produced Jose Carrington, one of the top table tennis players to ever represent SVG and in netball; there is the legacy of the Ballantynes, including the late Gloria Ballantyne, who he said was one of the best netballers to ever play the game globally, and one of the best administrators.

“An in culture, arguably the best mas’ producer that this country has ever produced,  Roy “Dragon” Ralph is from East Kingstown.

“Unfortunately, when one assesses the current conditions of the East Kingstown constituency, you cannot help but conclude that this constituency has been punished simply because the representative for the constituency hails from the New Democratic Party.

“The treatment that East Kingstown has endured epitomizes the level of divisiveness and backward politics this country has experienced over the last few years.”

He said that as the next representative for East Kingstown, and as a member of “this wonderful New Democratic Party team, I will ensure that that level of divisiveness is no more.

“This is our country. St. Vincent and the Grenadines belongs to every single one of us whether you are yellow, green, blue, red, pink, or purple. And I know about that, as a former national footballer, and as an individual who has represented this country in so many areas.

“It hurts my heart to really see where our country is right now. And I am going to work diligently, Mr. Eustace, I don’t make promises but I’m going to break that rule tonight. And I promise you that you will be proud of my representation.

Bramble said that some examples of the punishment meted out to East Kingstown for voting the NDP include the poor health facilities.

“… the Sion Hill clinic is arguably the worst in the entire country. And to add insult to injury, this clinic has been closed for repairs and the replacement temporary clinic is also closed,” he said.

“This is a constituency where the Minister of Health and the Environment was born, raised and lives,” Bramble said, adding that he was not taking cheap shots at the health minister.

The health minister, Senator Luke Browne, is slated to be the ruling Unity Labour Party’s candidate for Central Kingstown, making his third bid to wrest the seat from the NDP.

“… when you critique objectively, people tend to tell you, ‘Oh, why are you going at people personally?’ Well, if you are a minister of health, and I critique your performance, then by extension, I am critiquing you. It just stands to reason.”

He also spoke about the poor environmental conditions of the constituency.

“Has anyone of you ever walked through East Kingstown recently, Roseau, Walvaroo?” adding that some youth invited him to Roseau, a Sion Hill community two nights earlier and he was “almost moved to tears when these young men expressed to me their concerns.

“Those were not concerns. Those were expressions of pain, expressions of desperation. And I’m sitting there, I almost pinched myself and I’m saying, why me what makes me so worthy for these young men to have the confidence in me to come down there, to speak with them and to reason with them. Suffice it to say, it was a very, very, very rich and fruitful conversation. And I intend and look forward to more of that.”

Bramble, in his speech, gave insight into his “20 activities or projects for the 2020s” that speaks to his vision for the district.