Beaches SVG will distinguish itself from nearby Sandals hotels — Camillo 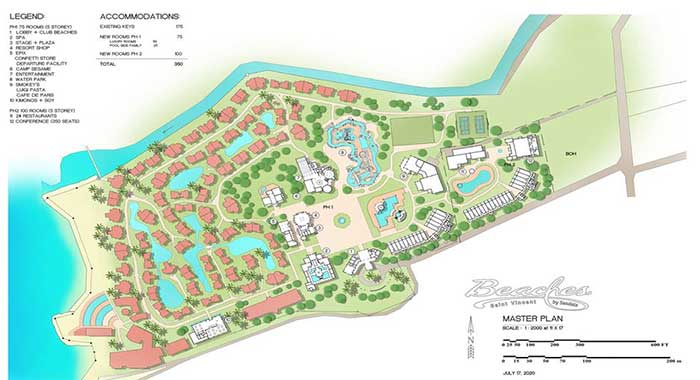 While the resort Sandals will build at Buccament Bay would be its fourth in close proximity to St. Vincent and the Grenadines, the local resort will distinguish itself in a number of ways.

There are Sandals resorts in St. Lucia, Grenada, and Barbados — or to the north, south, and east of SVG, but Minister of Finance, Camillo Gonsalves noted that the Sandals set up in SVG will be a Beaches hotel, which, while part of the Sandals family, is a different brand.

There are Beaches hotels in Jamaica and Turks and Caicos Islands.

“… to put it in the simplest form, a Sandals is where young lovers will go, young couples will go and Beaches is where they’ll go … after they’ve gotten married and had a family. And so Beaches is a family resort,” he said on WE FM on Sunday.

“And so it is going to be significantly different from the neighbouring islands’ facilities because it’s going to be very child-friendly,” he said in response to a question about what would distinguish the Sandals resort in SVG from those in the neighbourhood.

He said that the Beaches resort at Buccament Bay would have a children’s theme park, a waterpark and Sesame Street characters doing performances.

“There is a little train that’s going to drive all the way around the facility that the children can ride on, there are areas where parents can leave the children and so essentially have them taken care of while the parents go and do something else more adult.

“So this is a family-oriented resort that’s being built here as opposed to a sort of young lovers’ resort, which is what the other Sandals will be. So we’re targeting an entirely different demographic.”

He said that to SVG’s benefit is that there are data to show that the Beaches hotel and a family-oriented five-star hotel hire more staff than a couples-oriented hotel.

He said that when a reservation is made at Beaches, it is more likely that, on average, it’s four people or five people travelling, while a Sandals reservation is likely to be two persons.

He said that Beaches SVG wants to distinguish itself further not only from its Sandals neighbours but from other Beaches resorts in the Turks and Caicos, in Negril and in Ocho Rios in Jamaica.

The finance minister said that one way in which Beaches SVG plans to do this is to “make the Grenadines a reachable and accessible part of the vacation experience.

“So their people have already come down here, they’ve explored Bequia in particular, because that’s the nearest beach, sort of, so to speak, and they’ve explored the nature parks down into the Tobago Cays and the like, and they’re very keen on making that a part of the experience.

“But they want to have boat tours, they want to have excursions, and they want the people who stay there not to stay within the four walls of Buccament Bay, but to get on a vessel and go see what else is on offer and the rest of the Grenadines. That is going to be a part of their vision,” Gonsalves said.