Bramble ‘a Johnny-come-lately, and who will be too late’ — Luke 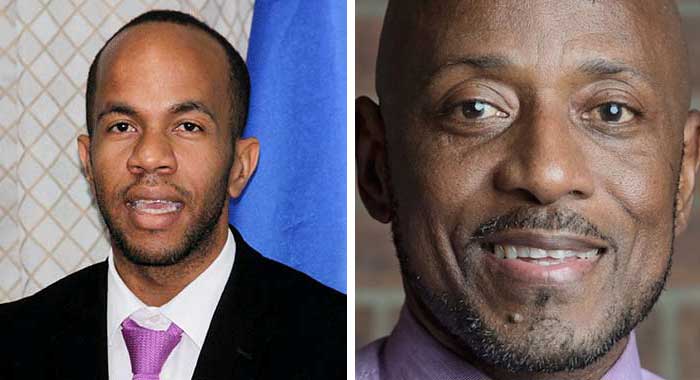 Unity Labour Party (ULP) candidate for East Kingstown Senator Luke Browne says his rival, Fitzgerald Bramble of the main opposition New Democratic Party (NDP), is a “Johnny-come-lately” who will not be allowed to impose himself on constituents.

Bramble, an economist and former national footballer and diplomat, who recently returned from Canada, where he was based for years, to context the next general election, is making his first bid to retain East Kingstown for the NDP.

Bramble is replacing Arnhim Eustace, of the NDP, who has represented East Kingstown since 1998 but is retiring from politics.

A caller to Star Radio, the ULP’s radio station, said Tuesday night, that Eustace was “in office from 1998 to 2020 and there’s nothing in Kingstown bearing his name.

“He was Prime Minister for a period of time. And he was a fiscal advisor to the government and Minister of Finance during part of the period, so he had time, he had resources to do it but there’s not even a lamppost in East Kingstown that bares the mark of Mr. Eustace,” the caller said.

He said that notwithstanding this, the caller said, Eustace recently told Bramble that he did well and that Bramble must do more for the constituency than he did.

“Well, that is easy because he did nothing,” the caller said.

Browne who is making his third bid to win East Kingstown for the ULP was host of the programme, agreed, saying:

“That’s easy, but the only thing that his apparent successor is seeking to do more than he did is talk. And they have — I mean, the people are wary of bramble talk, you know, and the people don’t want to be brambled, the talk is going around, ‘Doh bramble me.’  And another thing that they talking about is, ‘don’t gamble with Bramble.’”

“Bramble talk” is a colloquial expression meaning using flowery language to try to fool someone.

“You know, so people are sensitive to what’s going on. So we don’t want this talk shop going on,” Browne said.

“You don’t have to show your interest in a constituency before you have the opportunity to represent them. You don’t have to go through the hard slog of getting to know people, of building relationships, of thinking about how you could bring about or engineer a better and a good and a better, glorious future for them, by one-on-one intimate connections developed over a period of time.

“Yo’ doh pay the people that respect but you expect to just jet ski, to come into the situation, you know and abruptly command them; support you. Ah mean, you going around and the first words out of your mouth instead of even being concerned about people’s circumstances is if yo’ voting for me.

“You don’t know how they’re going about a life on a daily basis but you’re interested in if they are registered to vote, and if they voting for you. That’s what people going to settle for in East Kingstown?”

He said there are a lot of things to talk about in the election campaign.

“Plenty thing ain’t talk yet. But there’s a lot of thing to talk in this election campaign. Because if anybody feel that they can impose themselves on the people of East Kingstown, anybody without scruples or morals or anything at all, going to impose themselves on the people of East Kingstown, going to come from where they come from, and interrupt a process and a programme, which is intended to deliver maximum benefit for the people of that constituency, they wouldn’t be coming up against Luke Browne, they will be coming up against the electorate, and the electorate will speak with a vengeance,” he said.

Browne said that the caller knew, better than most of how he went from having a deficit of almost 500 votes to bringing it to within 149 votes of victory last election.

“And we’re going to allow somebody to stop the progress for the people of that constituency? Not at all. A Johnny-come-lately, and who will be too late, too late shall be his cry in that respect” Browne said.

13 replies on “Bramble ‘a Johnny-come-lately, and who will be too late’ — Luke”