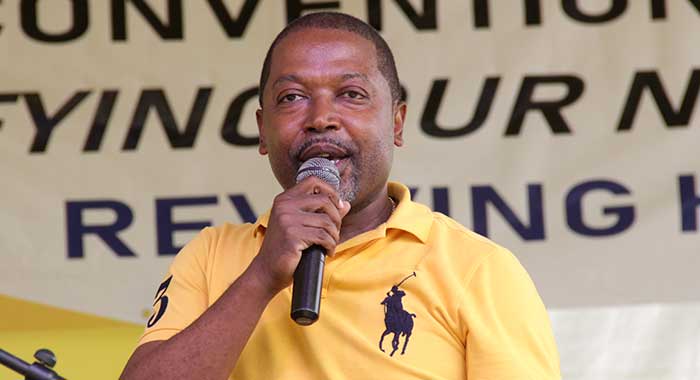 Increasing the number of people on “Poor Relief” – Public Assistance — shouldn’t be seen as bragging rights for a government.

Further, people should not fall to talks that they are ungrateful if they do not vote for a party because a relative might have received something from the government, says opposition politician, Ben Exeter.

“An NDP administration doesn’t want our people to have to come to us each month. We want to empower you to take hold of your own destiny. We want to give you a hand up: tools, training and opportunity, not a handout,” Exeter said at the New Democratic Party’s virtual rally last Thursday.

“I hear this thing about loyalty. The people in power give you scholarship, or give you jobs, or give you lumber, cement and galvanize.

“The people in power gave you nothing. The taxpayers of this nation gave you the scholarships and all the other things being handed out,” said Exeter, the NDP’s candidate for Central Leeward.

“You owe the taxpayers, your hard work in return, and your commitment to democracy in St. Vincent and the Grenadines.

You owe the people in power nothing. They work for you. So when they come with their talk that you are ungrateful and you need to vote for them because they gave your son or daughter X, Y, or Z; tell them that it’s not how the story will end again.

“Tell them that you deserve what you have because you worked for it.

Tell them that you will no longer be ruled by guilt and blind loyalty.

Tell them that you are sick and tired of the way things are.

Let your voices be heard.

“With all the noise around, it’s hard to hear. But I urge you to look and see. Look and see people who are willing to fight with you, for you,” Exeter said.

He said that when he first entered politics a little over five years ago, he saw the need for representation “because I saw a neglected community.

“This neglect has only been deepened since then,” Exeter said, adding, “As if by design, this government continues to neglect the people of Central Leeward.

“Youth unemployment has risen; poverty has deepened, and direct government assistance has been reduced to tokenism. My job, especially in the last five years, has been fighting for the people of Central Leeward. I did not have the power of the state behind me, but I had the power of my commitment.

“And that is why we are confident, that we can win the fight on behalf of the people for the hotter the battle, the sweeter the victory.”

He said many constituents are “rightfully broken, tired of politics and political promises, feeling that there simply is no way out.

“I understand why you feel that way. You have been feeling the pressure of someone’s knee on your neck for 19 years; 19 years of pressure; 19 years of being suffocated; 19 years of your hope being decimated,” the opposition politician said.

“We cannot continue in a state of existence. We must begin to live again — to thrive. People of St. Vincent and the Grenadines, it’s no longer good enough to be able to just withstand. It is time we stand with each other, join together, and make a change,” Exeter told the campaign rally.