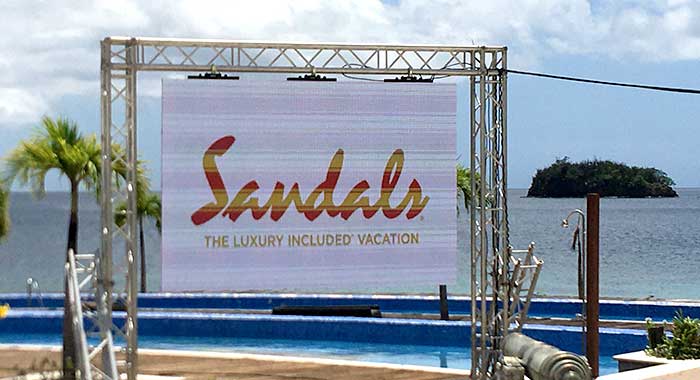 Leader of the Opposition Godwin Friday says he welcomes the announcement that Sandals Resort International will take over the failed Buccament Bay Resort, but he would like to know the details of the deal.

“There is some, too much opaqueness, not enough transparency about it,” he said, adding that his New Democratic party would like to see the reopening of the facility – which closed in December 2016.

“And I think the more open they are about it, the better it is because it will inspire more confidence in people that there’s something finally positive is happening about it,” Friday said.

“The way they went about it in the first place, that is a story in itself and needs to be properly examined to make sure we don’t miss and make these mistakes again. And some of those mistakes were easily avoidable,” the opposition leader said Monday on the New Democratic Party’s (NDP) radio programme on NICE Radio.

Very little has been made public about the contract that Prime Minister Ralph Gonsalves and deputy chair of Sandals, Adam Stewart signed last week Wednesday, at the resort.

“Buccament Bay Resort has been almost like a sad tale of woe. It’s been closed now for three years,” Friday said Monday on the NDP’s programme on NICE Radio.

He said that the former owners of the resort owed taxes to the state as well as private contractors and resort staff when it closed in 2016 after its electricity connection was severed because of non-payment.

“And then they have a situation where there was talk of one developer after another, one group of persons who were coming to buy it and in the parliament, the prime minister said it should have been open since two Christmases ago,” Friday said.

He said these developments have created a lack of confidence within the people.

“And it’s not just a private development, because you don’t forget when these things come, they get a lot of concessions and so on, to attract them to come and to enable them to get the facility built, and up and running as quickly as possible,” Friday said.

“So we, as a nation, we have a stake in it as well from that point of view,” he said adding that the nation’s interest also includes the jobs that the investment creates.

Friday further noted that there were issues relating to land ownership at the resort.

What was formerly known as Buccament Bay Resort occupied about 25 acres of land, including the beachfront, which belongs to the state.

The government has acquired those 25 acres of land and a further 15 acres, including land belonging to three active farms, for on-selling to Sandals.

He said land title has always been a big problem at the resort.

“… the developer, with the acquiescence of the government, obviously, had built and profited… Those things have to all be settled fairly and equitably. You can’t just simply railroad people’s rights because, they really want to be able to get it open, especially they want to do it now before — at least make an announcement before an election, to make a look that something finally is being done.

But it still has to be done right because in the first place, it wasn’t done right. So now that we’re moving forward, it has to be done right. So those matters have to be settled; the people who have articulated their claims … have to be dealt with in a fair and just manner to make sure that they’re settled properly to the interests of all parties involved. You can’t just simply brush them aside,” Friday said.