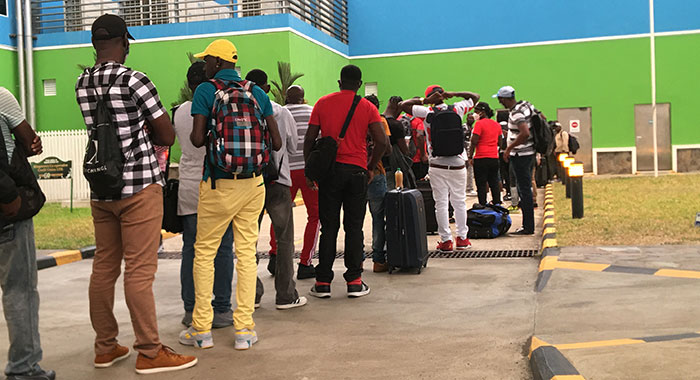 Vincentian farm workers queue up at Argyle International Airport for their flight to Canada in May. (iWN photo)

Three of the 18 Vincentian workers who ended up in unacceptable accommodation on a farm in Canada moved into hotel rooms paid for by the government of ST. Vincent and the Grenadines.

Prime Minister Ralph Gonsalves said on radio last week that while the farm workers programme is going “pretty well”, there was a problem at a farm on Prince Edward Island, where Vincentians had gone to work for the first time this year.

He said that 63 farm workers, 30 from St. Lucia and 33 from St. Vincent and the Grenadines, took up jobs on the island.

“And one of the farm where 18 Vincentians went, the accommodation, clearly, from all the reports, did not meet the standard which it was claimed that was there.”

The prime minister said that there is an Organisation of Eastern Caribbean States (OECS) farm workers liaison officer in Canada, but that person is based in Toronto, which he noted is ‘”a little bit away” from Prince Edward island.

“The details as to why is it that these workers were sent to a farm where the standard of the accommodation at that particular farm did not meet minimum requirements.

He said Minister of Labour, Saboto Caesar informed Cabinet on July 29 that the Vincentians were on a farm which did not meet minimum housing requirement.

“I told Saboto and I took a decision at Cabinet to put all 18 of our workers in a hotel for the next few days until the employer remedied what was wrong. And we would do at our expense,” the prime minister said.

Gonsalves said that on Aug. 3, he had a three-way conversation via phone with SVG Consul General in Toronto, Fitz Huggins, Caesar and the OECS liaison officer for the farm workers in Canada.

The prime minister said that when the instructions went to Huggins, he made arrangements, but only three of the 18 workers said they would “avail themselves of the opportunity to go into the hotel.

“… the others said that they would make do for the next day or two, nuh, once they know that — and the company had started to do the renovations or the upgrading.”

The prime minister said that the liaison officer had indicated that “95, 98% of the problems have been sorted out.

“There are one or two other things but not related so much to the accommodation. So I am pleased to report that there has been progress and to tell you what we did very promptly because we sent our workers there.”

“This is a programme in which the state is involved. It’s not people who arbitrarily pick themselves up — well not arbitrarily but people how take themselves up and go away — making their own arrangements with an agent or anything like that.

“These are who come through the Labour Department so if there is anything that goes awry with any of our citizens there, accommodate like, I take it as our responsibility to make sure and if it was not done, if these corrections were not made, we’d ask the workers if they want to come home,” he said.

He said that there was a Vincentian worker who was experiencing some anxiety issues, separate and distinct from the accommodation matters.

The prime minister noted the economic significance of the programme, saying that in 2019, the farmer workers transferred almost EC$13 million in net earnings to SVG.

“So it’s a significant amount of money which farm workers make for the period of time, as reflected in these numbers.

“But the others, the programme is going on, as far as has been reported, because Saboto is responsible for that, going along fine,” he said.