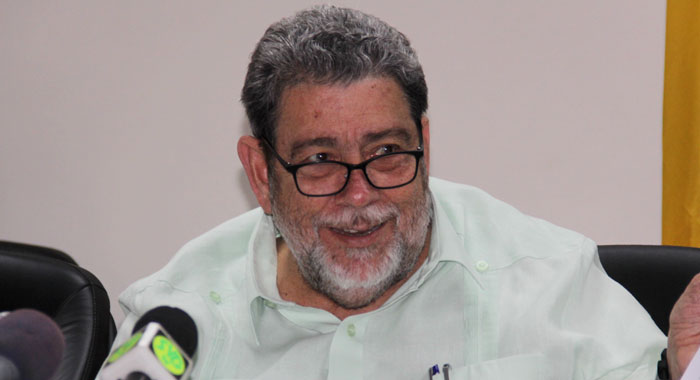 Prime Minister Ralph Gonsalves has defended his government’s decision to acquire a portion of land that has been in a family for 100 years, after notices to vacate were giving to non-compliant tenants who had occupied the land for a quarter of that time.

“I just want to ask you, P, John, would you like to see, john, 15, 20 families have to move with their children? After living there for 25 years?” Gonsalves said on WE FM on Sunday, addressing Philbert John, one of the hosts of the programme, who raised the issue with him.

Last Tuesday, Simone Murray, the manager of the McLean estate in Richmond Hill (also referred to as Murray’s Village) said that she felt as if she was living in a communist state with the manner in which the government had acquired some three acres of the land.

Murray detailed to iWitness News in a video interview — published on Sunday — the reasons why her family has asked 11 of the 16 tenants to vacate the land, which her great grandfather bought in 1921, according to a deed seen by iWitness News.

She said that for almost 15 years, her family has been trying to bring order to the property, on which several of the tenants have refused to pay their rent, which ranges from EC$50 to EC$300 a year.

She said that while there is five acres of land remaining on the estate, distributed to various members of the extended family, only a small portion of it is suitable for housing.

Other areas of the land are prone to land slippage and rock falls, Murray told iWitness News, adding that on two occasions, the National Emergency Management Organisation (NEMO) had had to relocate families after their homes were damaged by landslides.

Murray accused the Gonsalves’ government of acting high-handedly in its compulsory acquisition of the land.

She said that there is no survey plan and her family was unsure about which portion of the land the state had acquired and how much the state was proposing to pay for it.

Murray said that as a breast cancer survivor, she is more concerned in growing her own food and wants to use her portion of the land for agriculture.

Her cousin owns a portion of the land, Murray told iWitness News, adding that only 11 of the 16 families have been asked to vacate the land since the others live on the periphery.

In his comments on Sunday, Gonsalves said that a number of persons who live on the land had written to him.

“And as you are aware, the government has a public policy of facilitating people with housing. If somebody — people who are an informal human settlement, we try our best to keep them there and let them get title to what they have there. Or we put them somewhere else,” Gonsalves said on the interactive show on which, as the only caller, he spoke for about one hour.

“I’ve read all sorts of things and I don’t want to comment adversely on anybody there. I mean, I don’t know well, Dr. Murray who has written on this matter,” he said, referring to Simone’s husband, Wayne Murray, a physician.

“But I know his wife who is a wonderful woman, and anytime we meet, we talk, if she happens to be at the airport, she’s leaving, she’s a good professional woman too.”

“Well, the letter to one person who wrote me and there’re a number of persons. I’m just given a sample. I happen to have the file here because I want to make sure that the person from the property get their money and so on.”

The prime minister read what he said was a letter Mrs Murray sent to one of the tenants in June.

The letter, according to Gonsalves, said:

“I hereby act on behalf of Mrs. Beverly Agard Lewis, to serve notice to vacate the lands of Mrs. Beverly Agard Lewis on or before June 5th, 2021. To date, all our interactions have been very cordial. However, the landowner would like to develop her said property, and therefore, notice is being served on you. We thank you for your understanding in the foregoing and do wish you all the best in seeking alternative living arrangements.”

Gonsalves also read what he said was a letter to him from one of the tenants.

He pointed out that the letter did not have “all the best punctuation and so on”.

“So if I read it — this is addressed to me. ‘Dear Honourable Prime Minister, I’m writing to you this letter as I bring my plight to you. And the reasons are for the past 25 years I am living in the community of Murray Village on the McLean land, the people who was living there was very polite, good relationship before they died. Then Trumpet offered to sell me a piece of land, a spot, but I was very unfortunate in that regard. Apparently she died.’

“Then they go on and say that since a certain event happened, I’m not going to read that because there you know, it goes on and this person says, ‘My girlfriend died recently and myself and my four children are living so that mean I don’t have a place of abode for myself.

“Honourable Mr. Prime Minister, I am, therefore, kindly ask of you to please used your good office at this appropriate time and see if you can assisted me concerned my plight expeditiously. It is a matter that I don’t have anywhere else where I can go and built a house. I mean land. Thank you for your kind consideration. And I shall be very grateful if my request be granted.’”

“Now, I read the letter as written. And I leave out a part where he makes certain allegations about certain persons — not against, I must add, Simone Murray. So, there it is.

“Now, the thing is this, we have to act. But I am always open to any further discussions. If the amount of land, if everybody can hold on one acre and there are three acres or whatever the case may be, and we see how the thing could work out but we had to move expeditiously. We really didn’t have much time.”

However, John asked if, based on this circumstance it was thought that compulsory acquisition was necessary.

“Yes. That’s what the cabinet decided upon on advice given,” the prime minister said.

“I always want to be fair with everybody. I’m telling you that if anybody who knows me… I must tell you. You can’t help being touched by certain things. I’m talking about children being put off of property,” Gonsalves said.

“Believe me; none of this gives me any joy but children on the land, man. People have been living there for a long time. This got nothing to do with any politics you know?”

The prime minister said that he is a “Matthew chapter 25 man”, adding that the Bible chapter has three dimensions.

“This doesn’t mean that they’re not people who have real problems with their housing and their eating and so on and so forth. “Because I get the feeling that there are some people who feel that if you see a picture with a house, which is in a terrible condition. I would say yes, it’s in a terrible condition and I will fix it. And we have fixed thousands since I’ve been in office,” Gonsalves said.

Some persons, commenting on the development, said that the prime minister’s perspective might be aided by the fact that Edward McLean, several generations ago, might have been inspired by Proverbs 13:22, which says, “A good man leaves an inheritance to his children’s children”, — an inheritance of which his government is now depriving the McLean clan, even as the state has ample lands elsewhere.

“This David could benefit from a conversation with Nathan, as per 2 Samuel 12,” another person commented.