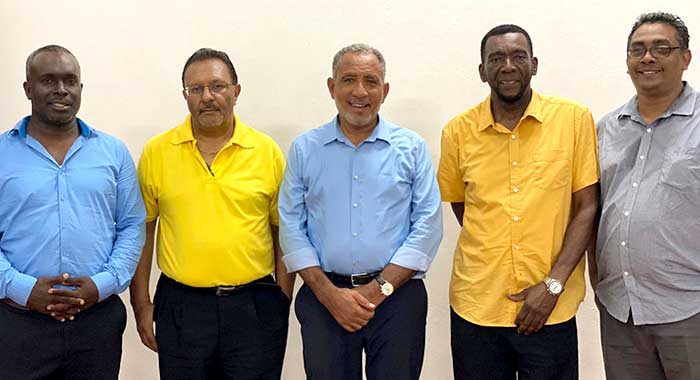 Bernard Wyllie is the main opposition New Democratic Party (NDP)’s candidate for Marriaqua in the next general elections, expected by year-end.

The NDP’s central committee confirmed and ratified Wyllie as the candidate Thursday night after the three other contenders, including Kirk Da Silva, who gained the most vote at the constituency level, withdrew their candidacy.

Da Silva, who joined the NDP after failing to become the ruling Unity Labour Party’s (ULP) candidate in Marriaqua in 2015, told iWitness News that while he was disappointed with Thursday’s outcome, he will continue to support the NDP.

At the primary held in Marriaqua on Aug. 11, Da Silva received 15 of the 29 votes, followed by eight for Wyllie.

Wyllie, a former MP for the area under the NDP administration, was voted out of office in 1998, when the ULP came within one seat of winning the 15-member Parliament.

At the primary, Phillip Jackson, who was making his first bid to become a candidate, got four votes, while Curtis Bowman, who was the NDP’s candidate in 2010 and 2015, got two votes.

In keeping with the NDP’s constitution, the outcome of the constituency division’s vote was sent to the NDP President Godwin Friday for forwarding to the party’s central committee.

Friday, who is also Leader of the Opposition, told iWitness News Thursday night that Wyllie was confirmed and ratified as the candidate based on his (Friday’s) recommendation.

The NDP president said the party has always taken pains to explain the candidate-selection process.

He said that Marriaqua has five party groups and six officers from each group are on the council and are eligible to vote.

The NDP president said that once the division make the decision, it forwards it to him as the president of the party to be taken to the central committee.

“It’s a recommendation and so if the person does not receive three-quarters of the votes, you are not bound to send the one candidate.”

He said that while Da Silva got 15 votes, which was more than another of the other candidate, it was only 50% of the persons who were eligible to vote.

“And if you consider the other candidates that we’ve had, most those have almost been single candidate nominated or close to 75% in the case of [East] St. George. So, under those circumstances, it’s appropriate to put the matter for the central committee to review,” he told iWitness News.

“And because of the outcry that has been throughout the constituency and some parts of the country as well, thinking that the selection at the local level did not reflect the popular will, I did my own walk around and there was a lot of comments, negative comments about the decision.

“People didn’t like it and the person they were calling for, by a wide margin, was Bernard Wyllie.”

Friday said he brought this to the attention of the central committee.

“I addressed the central committee as well and urged their support for the candidate the people want and so Mr. Da Silva withdrew his candidacy and prior to that Curtis and Jackson had withdrawn.

“Jackson had endorsed Wyllie and Curtis essentially withdrew because he felt at the time he was not the best candidate, I suppose.”

Asked how he thought the public would responded to the decision, Friday said he was unsure, but said the process was in keeping with the NDP’s constitution.

“In our situation, we follow the constitution very closely. That is the nature of our process. It is not done until the central committee. There is precedence for it. It is not like it is unprecedented but the important thing is how the people in Marriaqua feel and I believe the decision here will be welcomed by the supporters of the New Democratic Party in Marriaqua and they are the one who are going to vote.”

Meanwhile, Da Silva noted to iWitness News that Friday had recommended Wyllie as the candidate.

“The president recommended him, so, basically, I had no alternative but to withdraw because he advised the delegates to support Wyllie. So I didn’t let them vote. I think they would have followed the president’s ruling,” Da Silva said.

Asked how he felt about the development, Da Silva told iWitness News:

“I think I am disappointed. … it is part of the constitution that if you did not get 75% of the votes in your constituency that the party has the right to — it is basically the correct procedure so I can’t fight it or anything. That’s all I can say.”

He said he would continue to support the NDP, although he left the ULP after the candidate selection process in 2015.

Asked what makes the NDP different from the ULP, notwithstanding the similar experience, Da Silva said, “As I told everyone, I think I have a contribution to make and if I didn’t make it here I could make it there. If the other party provided an opportunity, why not?

“I will still support the party. I will stick with the party,” he said of the NDP.

This is the second consecutive election in which a retired politician had return to active politics to run as a candidate for his party.

In 2015, Sir Louis Straker came out of retirement after five years to represent the ULP in Central Leeward.

He retained the seat, which his successor in 2010, Maxwell Charles had won.

Previous, Sir Louis had represented Central Leeward from 1994 to 2010.

13 replies on “NDP chooses Wyllie over Kirk in Marriaqua”