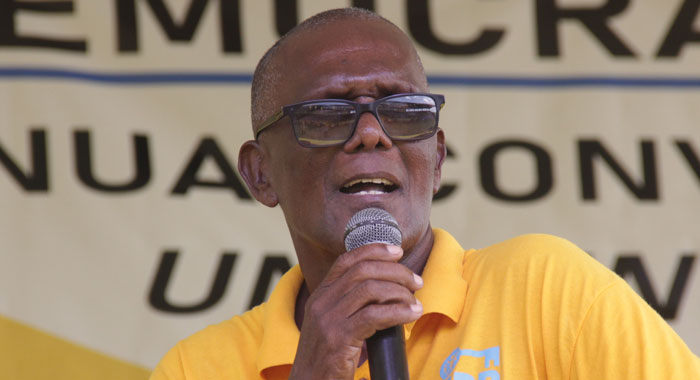 Former opposition lawmaker Monty Roberts has denied making the Facebook post that appears to question a female candidate’s ability to love people because she has no biological children.

“I don’t know anything about that. That’s somebody trying to hack my account,” Roberts, who was Member of Parliament for North Windward from 1989 to 2001 on a New Democratic Party ticket, told iWitness News Thursday night.

The post, which appeared on social media Wednesday night, during the ruling Unity Labour Party’s first virtual campaign rally, read: “Mini don’t have a seed of her own to love. Can she love people?”

Many persons on social media have concluded that the post was referring to Mineva Glasgow, the ULP’s candidate for South Leeward.

Glasgow, a retired former deputy executive director of the National Insurance Services, made her inaugural speech as a candidate during Wednesday’s meeting.

Glasgow has no biological children.

Asked if he made the post, Roberts, 75, told iWitness News:

Asked if he knew why someone would attempt to associate him with such a post, he told iWitness News, “Politics is in the air and it’s all political motives and so on.

“That’s all part of the game, I guess,” said Roberts who last year made an attempt to return to politics as an NDP candidate but is said to have been eclipsed by a teacher, whose alleged candidacy the party is yet to announce.

Roberts gave iWitness News his position on an individual’s reproductive health and/or choices:

Roberts said a person’s reproductive status should have no bearing on whether they become a candidate or is elected to office.

It is not the first time in recent months that hacking has been blamed for an embarrassing post on Facebook.

In June, the Government of St. Vincent and the Grenadines blamed hacking for a post on the Facebook page of its High Commission in London, telling U.K. Prime Minister, Boris Johnson to “shut up”.

“oh shut up Boris – that is have nothing to do with the question” read the post, which was subsequently deleted.

The Ministry of Foreign Affairs in Kingstown, said that the Facebook page “was hacked, resulting in an unauthorised post with apparent reference” to Johnson.

Five years earlier, on May 3, 2015, the landing page of the www.gov.vc website was hacked and replaced by pro-Islamic State messages.

The hack was purportedly carried out by an individual or entity using the name “Moroccan Wolf”, who the Moroccan government has said is known to them, Minister of Technology Camillo Gonsalves said after the development.