‘Scramble’ to repair roads shows gov’t in ‘a panic situation’ 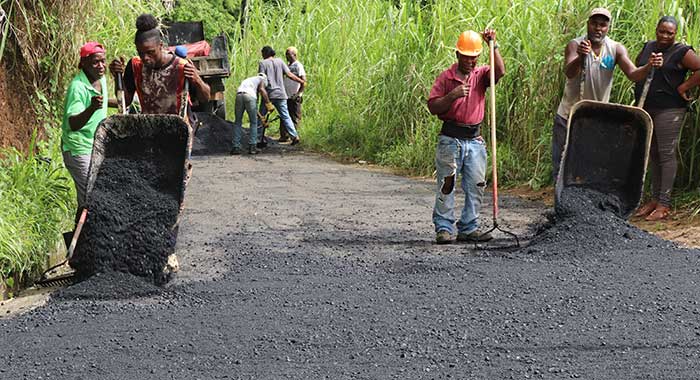 The government has been repairing roads across the country.

Leader of the Opposition, Godwin Friday says that the Unity Labour Party government is in “a panic situation” manifested in its road repair programme.

He said that the rush to repair roads across the country ahead of a general election — expected by year-end — shows that the government has neglected “basic things”.

“If you can see the roads, the state of the roads around the country, and know that they’re in such disrepair, you ask yourself, if these things that are so clearly visible, are so lacking, imagine the things that we can’t see,” Friday said on his weekly show on NICE Radio last week.

“But they want us to take their word that they are being done properly and that the interests of the people have been protected.

“That we can’t take for granted when we know that in the things that are visible, that are clear to us, they are not dealing with them properly.

“And when you see all these road works that they’re doing, again, it’s all visible so they want to say, ‘Look how we’re busy. We’re doing these things.’ Well, what happened to the last three and a half, four and a half years going forward? How come we didn’t take care of them there? That is the way that you govern?” Friday said.

He said the government, basically, waits until election time and scrambles to “to fix up things because people, of course, they have been suffering for so long, they want them fixed”.

He said he has spoken many times about a road in Belmont, Bequia, “that had become so dangerous that I myself had slipped off the side one night.

“And so many times we’ve raised this as we have done for other roads throughout my constituency.”

The opposition leader said that in the last Budget Debate he showed to the Parliament photographs of some of the roads across the country.

“And all they could say is that I was interested in pothole tourism. I mean, making fun of something that most people in this country felt was very, very serious because it puts the cost of maintaining your vehicle on you, which is an indirect tax in a way. If the government don’t fix the road, it means you have to fix your car.

“So when I raise this issue, they try to make fun of it and mock it and so on, but the reality is that on the ground people know that it’s important. And if they thought I was being so off the mark, how come they’re all scrambling now to try and fix up the same roads that, many of them, I mentioned in my budget address in January?  Because they realise that they haven’t delivered and the people notice.

“That is like somebody who neglect you for such a long time, and they come now and they mek up so they bring a nice, pretty well-wrapped gift, you know, and the bigger gift is evidence of the greater the neglect,” Friday said.