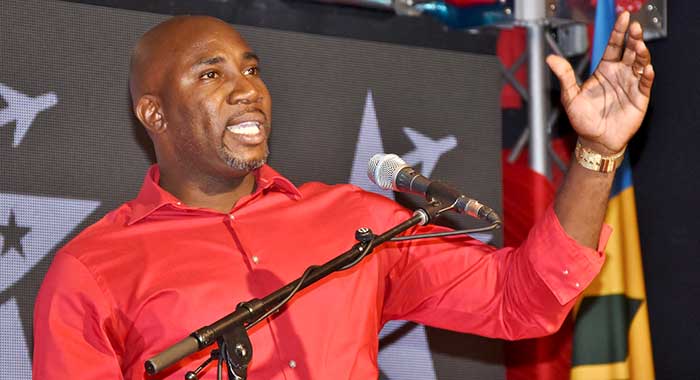 Orando Brewster, the Unity Labour Party’s candidate for Central Leeward at the party event last week, where he also said he has a “doctorate in medicine”. (Photo: Lance Neverson/Facebook)

The ruling Unity Labour Party candidate for Central Leeward Orando Brewster says he did not know the difference when he said he had a “doctorate in medicine” rather than a “Doctor of Medicine” (MD) degree.

Brewster, 33, a first-time candidate, has found himself having to explain his credentials after saying publicly at least twice that he holds a “doctorate in medicine”.

He made the statement on Star FM, the ULP’s radio station, on July 22 and again last week Wednesday, when the party formally announced his candidacy and that of three other persons during a virtual political rally.

Among the persons present at that event were two PhD holders, Prime Minister Ralph Gonsalves, and Mineva Glasgow, the ULP’s candidate for South Leeward, who was also launched as a candidate.

On Tuesday, Brewster took to Xtreme FM during an interview on what he said was the certificate showing his qualifications.

One of the hosts who read part of the contents of one of the documents, noted, however, that the Doctor of Medicine degree, awarded by All Saints University, was dated Aug. 5, 2020.

Asked on Wednesday to state clearly what his qualifications are, Brewster told iWitness News:

“As I portrayed to Xtreme yesterday, I am a holder of a Doctor of Medicine degree, an MD degree and that issue is dead, as far as I am concerned.”

iWitness News noted that on at least two occasions previously Brewster had said that he holds a “doctorate of medicine”.

“Ok. That was just a matter of semantics. It is supposed to be a doctoral certificate. That just a gaffe; it wasn’t anything…” he was saying when the call ended suddenly.

“It is just the same thing as saying I have an MD degree.  I didn’t think it was a big issue.”

Asked if he was aware that an MD is not the same thing as a doctorate, Brewster said, “Well, yeah. Fine. After that, I did my research and found out the difference because the doctorate is a PhD holder.”

Brewster said he did the examination on June 26, adding, “But the process, you have to wait because graduation is in August and they give you the option of graduating. But with COVID-19, all these things are at a standstill so I took the option of just accepting my diploma.”

Asked what the date of the diploma was, Brewster said he could not remember and he did not have it with him then.

iWitness News noted that on Xtreme FM, the announcer had said that date on the diploma was  Aug. 5.

Asked if that sounded correct to him, Brewster said, “I guess that’s the date it was printed from the university.”

Brewster was asked what he would say to people who said that when he said in July that he had an MD that that was not actually the case because he had not received the certificate.

iWitness News further asked Brewster if he thought this was of any consequence.

“That was July 22. I had finished my exam; I had passed my exam. I did the exam the 26th of June. I was informed via email that I had been successful and I know it was only a matter of receiving my diploma. And I did my white coat how many years ago — about two years ago… This exam is a tough exam. I took time out to study for this exam, to prepare for this exam,” Brewster said.

iWitness News noted that the certificate shown on Xtreme appears to have a space with some typed characters under a line, which appears to be reserved for a signature.

iWitness News asked Brewster if he knew if this was the case.

“You would have to get on to the school for that, but as far as I am concerned that same document holds the school stamp, that is shown clearly. So if you look at the document, you will see that it is stamped by the school. That is just the letter that comes with the diploma.”

Asked if, as far as he is aware there is no signature missing, Brewster said, “As far as I am aware, the school has put its stamp on it so there is nothing that can beat the school stamp.”

iWitness News reiterated that the question was about a signature and not the school stamp.

Brewster said: “Well you can get on to the school and ask that question because I went through it, I received it, that what I got, I signed and collected my diploma.”

Brewster, however, said that he could not practise medicine as it stands now.

“No. I have to finish the internship programme which I have put on pause for this political aspiration that I have coming up here.”

Asked if he is successful in his political efforts what then would become of his medical degree and whether he intends to practice medicine, Brewster said:

“I don’t know what the future holds; that’s in God’s hand. I am gonna take my direction from him, as to how to proceed forward. So with prayers and careful consideration I will know what the next chapter holds.”

iWitness News asked if he had also approached with “prayers and careful consideration” his decision to enter politics, Brewster said, “With prayer, with fasting and a lot of prayerful consideration.”

He said he took the same approach regarding his career in medicine.

“I have always been someone who puts God at the forefront in everything I do.”

16 replies on “Brewster says he mixed up medical degree, doctorate”