Wyllie says he ‘is the people’s candidate’ 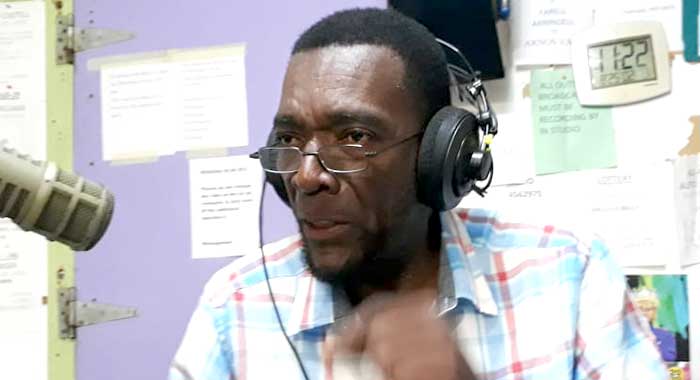 Bernard Wyllie, who was voted out of office in Marriaqua in 1998, is once again the NDP’s candidate in that constituency. (Photo courtesy Colin Graham.)

Bernard Wyllie, the man who, last week, emerged as the New Democratic Party’s (NDP) candidate for Marriaqua, 22 years after being voted out of office, says he is the “people’s candidate”.

Wyllie emerged as the candidate after the three other contenders withdrew their candidacy.

Among the contenders for the candidacy was Kirk Da Silva, a 2015 hopeful for the ruling Unity Labour Party, who gained the most votes for the NDP at the constituency council level.

The other hopefuls were Curtis Bowman, who represented the NDP in the 2010 and 2015 general elections, and Phillip Jackson who was attempting to become a candidate for the first time.

Wyllie became the candidate after NDP president Godwin Friday asked the party’s central committee to ratify him as the candidate.

Speaking on the NDP’s daily show on NICE Radio on Tuesday, Wyllie said he understands how the three other candidates feel, he himself, having given way twice to Bowman.

Wyllie said he had, years ago, urged Da Silva and Jackson and others to enter electoral politics on behalf of the NDP.

He, however, said there has always been the caveat that if the people believed that he had the party’s best chance of recapturing the seat, he would return to the arena.

“I have every respect and high regard for my fellow competitors, Kirk Da Silva, Philip Jackson, Curtis Bowman. And I want to thank them very much for their cooperation, as brother Cummings mentioned earlier, where they gave way in a sign of unity, to the wishes of the people,” Wyllie said, referring to a comment by the party’s chairman, Daniel Cummings on the same programme.

“Now, I also want to say that we are all human beings. And I understand the difficulties in these things. I have had that experience before. In the 2015 elections I was the constituency’s choice,” he said, adding that the candidate selection then was not as public.

“And as the chairman Porter will tell you, that under heavy pressure, I had to give way to Curtis Bowman.

Wyllie, however, said this did not deter me from campaigning for Bowman and trying to ensure that the NDP had the best chance of winning.

“I said that to say this and I also will want to mention this: this happened in 2010 with Bruce,” he said, referring to Israel Bruce, who is now the party’s candidate for South Central Windward.

Wyllie suggested that, in 2020, Bruce gave way to Addison “Bash” Thomas, who failed then and in 2015 to win the seat for the NDP.

“But look where he (Bruce) is today, solid member of the New Democratic Party. Because you see, we have to get back [to] the party and its objectives. The goal of working for the people of St. Vincent and Grenadines takes precedence over the personal. And so I understand some of the difficulties there in relation to people having reached thus far in the process. And I …have been there so I could empathise with it.”

Wyllie said that his candidacy was not of his own doing.

“Now, what I wanted to say to the people is that my candidacy came out of the bowels of the people of Marriaqua.  I want you to observe quite clearly, Bernard Wyllie did not advertise one line on any form of social media, not one. I did not go on any radio station, not even NICE Radio, to advance my cause.”

He said that in addition to Da Silva and Jackson, there are other people who he sought out personally to get involved politics.

“And I said to them if I can see, in my considered judgment, that any of you take any kind of attraction to go before and capture the imagination of the people I would step and support you.

“But I also said we cannot afford to leave Marriaqua unchallenged in any more elections. And if I see that anyone who, on the field on the ground, would not make any considerable progress in terms of challenging the incumbent, I am not withdrawing from the ring. I’m going to stay there. And I’m going to compete, because I think I have for the New Democratic Party the best chance of winning that seat. But I have no problem giving way to anyone else who would have been an even stronger force than myself. And I have not seen that force yet,” Wyllie said.

He said that the process through which he became the candidate is in keeping with the NDP’s constitution.

“One of the things about the party’s constitution is that if anyone really acquaint themselves with the constitution, they will know selection of a candidate is a two-part process,” he said.

He pointed out that the first process is at the constituency level and even when a candidate gets 75% of the votes, as the constitution indicates, “there are other factors that could still disqualify you from becoming the candidate.

“And then you are not really a candidate until you are ratified by the party’s central committee,” Wyllie said, adding that this is the second process.

“Now, in the Marriaqua situation, none of the candidates got up to the level of where one could consider to be almost a shoo-in. And therefore, what the party did, took us to the Central Committee, and all four of us had to make presentations, there again, right before the Central Committee and as brother Cummings said, the people of Marriaqua, having heard the first result, there was a lot of blowback in the constituency and I will be very fair about that,” Wyllie said.

He said that discord prompted NDP President, Godwin Friday to lead a team to the district to do “an investigation among the people and see why — to ascertain what he was hearing and the calls that he was receiving.

“And he went through the rain, because the people have a voice. And after he and his team had made their assessment, it was clear where the people were. And the president and his team made a recommendation based on the voice of the people.

2 replies on “Wyllie says he ‘is the people’s candidate’”