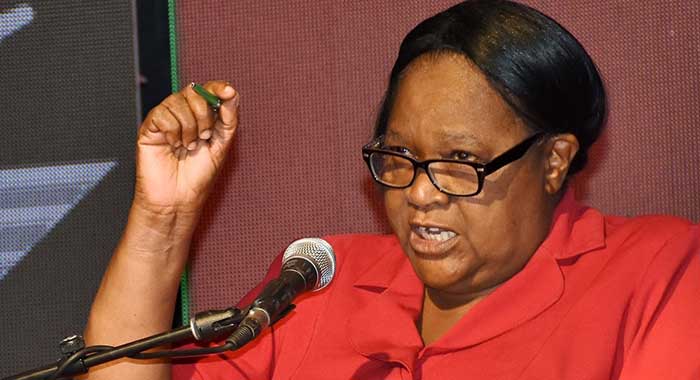 The ruling Unity Labour Party’s candidate for South Leeward, Mineva Glasgow says it is time for the constituency to have “have proper, meaningful representation in Parliament”.

“Comrades, I stand tonight with the ULP to lift St. Vincent and the Grenadines higher and to stomp the NDP lower and lower,” she said in her opening salvo at the ULP’s first virtual campaign rally this month.

Glasgow, a retired deputy executive director of the National Insurance Services, said that she is “a lifelong servant of this country for many years”.

“Tonight, I humbly present myself to the people of South Leeward to serve them as their next representative in Parliament,” said Glasgow, a first-time candidate.

Glasgow said she believes that these are important times for St. Vincent and the Grenadines (SVG) and South Leeward and the challenges and opportunities that await the country and constituency require “serious consistent and tireless leadership, qualities which have been demonstrated under the leadership of the Honourable Ralph E. Gonsalves”.

She spoke of a story in which a boy who was tossing stranded starfish in the ocean, when asked how much of a difference he thought his action would make, said he made a difference to the one he had tossed back into the water.

“This is a story of perseverance. It shows us that every action we take, no matter how small, can make a difference.”

Glasgow said it was this story that motivated her to contest the South Leeward seat when she was approached to do so.

“You see, I believe that by offering myself as a candidate that I can make a difference in the lives of the people of South Leeward. Like the prodigal son, South Leeward needs to be welcomed back home into the arms of the Unity Labour Party.”

Since 2010, South Leeward has been represented by Nigel “Nature” Stephenson of the opposition New Democratic Party.

Stephenson will seek election to a third five-year term as MP for the district.

“It is time for South Leeward to have proper, meaningful representation in parliament and I am fully committed to be that representative,” Glasgow said.

She said she was not entering politics “to seek power or prestige”.

“South Leeward, you know me. I have served the people of this country for decades,” she said, adding that everyone in the country knows “Ms G”.

Glasgow, a Seventh-day Adventist elder, said she is “a faith-driven woman who believes in the wondrous power of prayer.

“You know of my deep roots throughout all communities that make up the constituency of South Leeward. You have worked with me, laughed with me, played with me, even cried with me.

“You know that I love people, that I am committed, disciplined and driven. I have been in your houses several times and you know that Mini is an empathetic woman who listens.

“Now is the time for wealth creation and a better future for all, especially our young people in South Leeward,” Glasgow said.