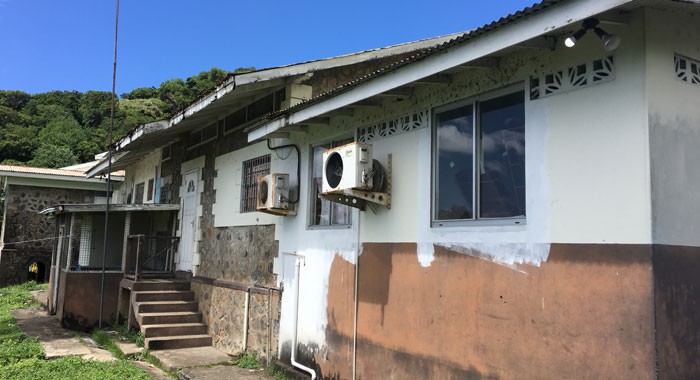 The Campden Park Clinic, as seen in October 2019. (iWN photo)

The Unity Labour Party’s (ULP) candidate for South Leeward says she will “not rest” until the clinic in Campden Park and the community centres in Penniston and Vermont are repaired.

In fact, Mineva Glasgow, a newcomer to politics, wants a polyclinic in Campden Park, where the existing health centre has been in disrepair for years.

In her speech at the ULP first virtual campaign rally this month, Glasgow, who was appointed a ULP senator in March 2020, asked constituents to support her candidacy, saying:

“It is time for South Leeward to have proper, meaningful representation in parliament and I am fully committed to be that representative.”

Glasgow said that her team has several plans with several programmes for South Leeward.

As regards infrastructural development, she said:

“South Leeward, Mini listens. Together we will address the river defence challenge in Vermont Valley. As a matter of fact, we have started work on that project.

“I have heard you and I will not rest until we get a modern polyclinic in Campden Park; until the community centres in Penniston and Vermont are properly refurbished.”

The clinic in Campden Park has been the subject of a number of questions in Parliament by the current representative, Nigel “Nature” Stephenson of the main opposition New Democratic Party.

In fact, in October 2019, Minister of Health, Senator Luke Browne, “cried shame” at Stephenson for asking four times in the previous two years about when the clinic would be rehabilitated.

And, since then, the conditions at the clinic continue to deteriorate.

Stephenson has also asked the government about renovation of the Vermont and Penniston community centres.

As recent as June 18, the order paper included a question about the Vermont Community Centre.

The MP said then that the centre has been in a deplorable condition for a number of years “and it will appear as if the very existence of the centre is unknown to the government since even the electricity bill is in a resident’s name”.

He asked for an update of the condition and when efforts will be made to rehabilitate the centre.

In response, Minister of National Mobilisation, Frederick Stephenson said that it was during the time of the NDP that the electricity bill was in the name of a person who was a member of community organisation.

“He said that was more than 20 years ago and the government is working to change all of them and put the bill in the names of the community centres themselves.

However, the minister told lawmakers that the light bill for the new community centre that the government built in Campden Park — which is yet to open officially — is also in an individual’s name.

The minister said that the Vermont Community Centre is among 20 that are earmarked “for some remedial work during this year”.

The second phase of the work includes the replacement of plumbing, etc., installing door handles, replacing damaged and missing rubber floor tiles, repairing damaged perimeter fencing and construction of cupboards for the kitchen and repainting the interior and exterior of the building.

The total cost of work on the Vermont community centre is EC$165,000, the Minister Stephenson said.

Responding to a comment from across the floor, the minister said it makes sense to break down the community centre.

“There are new facilities in that area,” the minister said.

He told parliament that works on the Vermont Community Centre have been approved at the Cabinet level and tenders would be sent out.

Meanwhile, regarding her plans for South Leeward, Glasgow said she believes that education is a game changer.

“Education makes a difference and so we are going to have evening classes, technical and vocational classes under the YATE (Youth and Adult Training for Employment) programme, where you can learn electrical installation and so on and so forth.”

In the areas of agriculture and fisheries, she said the ULP would work to promote agriculture as a viable and sustainable option for farmers, especially young farmers within the communities of South Leeward.

“And we should begin to develop generational wealth among our farmers by helping the farmers to own their own land — the land that they work,” Glasgow said.

She said she believes that sports and culture should be essential components of any school curriculum.

“I believe that sports have the power to change lives and to help reduce crime and violence among our youth. So I will work to ensure the development of more multipurpose community sports and recreational facilities across the constituency. Just go down to Clare Valley and you will see the new hard-court and young people are really enjoying that facility.”

“I live in South Leeward so I know we have a lot more work to do to address the condition of the road network throughout the constituency. And I commit to you that I will give that effort my all, not only in Bolomy, but the entire road that needs to be fixed. We will work on those.

“Too long, the people of South Leeward suffered under a representative with no clear development plan and no real love for the people. We are fed up of that sort of poor representation. I offer a new, caring type of representation, one that would work for all peoples to help our school children, to help with the expansion of electricity, and to help with improving telecommunication network across the constituency.”

“If you want a representative who will place the welfare of the people of South leeward first, vote, for me, Mineva Glasgow, Mini, Ms G. South Leeward’s new future begins today, and I offer myself to you in service with God’s guidance and his grace,” Glasgow said.