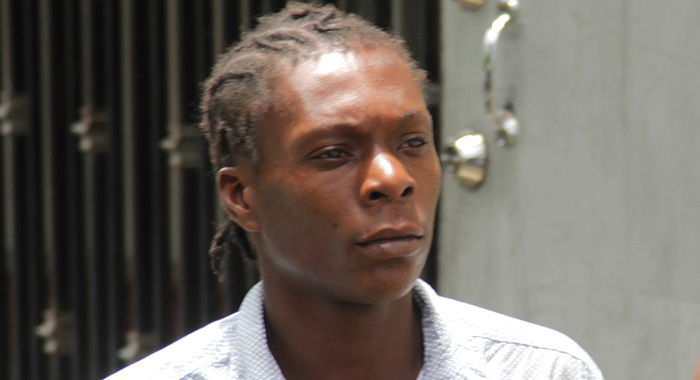 Leroy Patrick, was ordered to pay the fine immediately for his crime. (iWN photo)

The bleating of her goats was a verifiable alarm for a Vermont woman as a fellow villager raided her avocado tree on Sunday.

Leroy Patrick, 21, a resident of the South Leeward village, had just stolen 78 avocados from a tree in Steforn Maloney’s yard, when the woman heard her goats “bawling”.

This was around 9:40 a.m. on Sunday, when Maloney was on her bed relaxing.

On hearing the animals, Maloney looked out her window and saw Patrick in her yard wearing a black long sleeve shirt, carrying a sack on his shoulder.

Patrick, who is also known as “Little D” and “Speedy”, appeared to be hustling to get out of the yard.

Maloney went into the yard where an avocado tree that has a large quantity of fruit on it is located.

She noticed that some of the avocados were missing and reported the matter to the police.

The police investigated and took Patrick into custody and he admitted to the offence.

The avocados were valued at EC$195.

Patrick pleaded guilty to the theft charge when he was arraigned before Chief Magistrate Rechanne Browne at the Serious Offences Court today (Monday).

In mitigation, Patrick asked to be allowed to pay for the fruits.

In handing down the sentence, the magistrate said that the offence was a serious one.

She told the defendant that when people plant agricultural produce it is for their livelihood.

Browne said that losing this produce is painful.

“In these times, we cannot afford that,” she said.

The chief magistrate ordered that the fruits be returned to their owner and fined Patrick EC$400 to be paid forthwith or serve one month in prison.