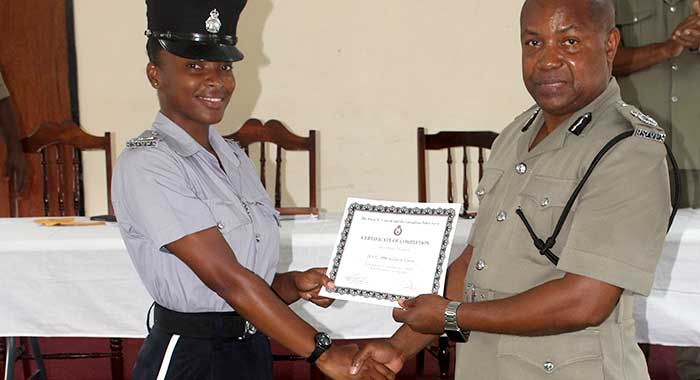 PC996 Sylvorne Lavia, left, receives from Commissioner of Police Colin John the award for the most outstanding police officer on the training course.

Thirty-two police officers from various departments of the Royal St. Vincent and the Grenadines Police Force are better equipped for the job following a successful basic development training course held at the Old Montrose Police Training School from July 6 to Aug. 26.

Commandant of the Royal St. Vincent and the Grenadines Police Training School, Superintendent of Police, Benzil Samuel  told the graduation ceremony that 35 students commenced the course but had to return to their unit for medical reasons while another person resigned.

He said the training was designed and geared towards targeting police officers qith one to  five years of service.

Samuel noted that training and retraining is a very important function as it will help the participants to grow individually, which wouls, in turn, propel the organisation forward.

He encouraged the participants to apply the knowledge gained to help with the effective and efficient execution of their duties.

Assistant Commissioner of Police, Leonard Fergus also addressed and congratulated the participants.  He reminded them of the importance of training and reiterated that they are the most valuable resource of the police force.

He noted that the graduation demonstrated yet another successful training course that was conceptualised and executed by the Police Training School under the auspices of the police high command.

Fergus emphasised that in a rapidly changing society, policing can be very challenging, especially with the increase in technology. He noted. However. that in order to contend with that reality, there is a need for constant training which is the aim of the high command of the RSVGPF. He encouraged the young officers to maintain law and order at all times and discharged their duties fairly without fear or favour.

Fergus told the officers that the effectiveness of a good police officer is demonstrated through a high sense of purpose and discipline in the performance of their duties.

He said not only are their peers looking on, but also the public as well, who has a vested and keen interest in how they operate as police officers. He urged them to always seek to gain and maintain the public trust and cooperation, because it is paramount in how effective they would be as law enforcement officers

In delivering the keynote address, Commissioner of Police, Colin John told the participants “If you aim at nothing, you will hit it every time”.

In seeking to motivate the officers to always be focused and driven, he used his career as a police officer.

He outlined that he joined the organisation on Jan. 16, 1988 and gave a brief history of the various departments and police stations where he would have worked.

The police chief highlighted that he had a passion for law and that propelled him to become a lawyer. John said he enrolled in A’ Level law classes which later gave him the opportunity to pursue his law degree in England.

The commissioner told participants that he was in no way attempting to glorify himself but merely wished to encourage them to set goals and aim to achieve them.

He advised the officers not to rest on their “laurels” because they are police officers now, but gain the necessary qualifications in order to improve their status.

John reminded the participants that the world is becoming more and more competitive. However, he went on to state that as long as they have the necessary qualifications, there are numerous opportunities available to them.

The commissioner encouraged the graduates to work hard, stay focused and disciplined in order to propel themselves and the organization.

PC 996 Sylvorne Lavia received the award for the Most Outstanding Police Officer on the training course.