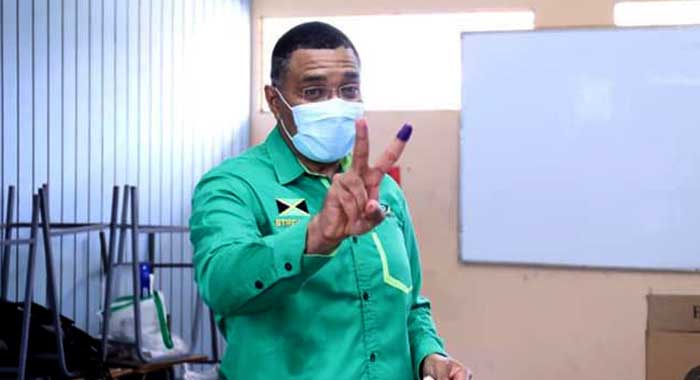 KINGSTON, Jamaica (CMC) – Prime Minister Andrew Michael Holness led his ruling Jamaica Labour Party (JLP) to its first ever consecutive victory in a general election since 1967, with a resounding victory that mirrored the win the party achieved in 1980 when it stormed to a 51-9 margin over the People’s National Party (PNP).

Preliminary results show that the JLP, which went into the elections, six months ahead of the fifth anniversary of the 2016 single-seat victory, had won 50 of the 63 seats in the Parliament, with Holness indicating that the task ahead is not only for the victorious JLP.

“The task ahead of us is for all of us, including the PNP and so tonight I also appeal to PNP supporters do not feel dejected, join us in celebrating Jamaica’s victory.

“You will have a very important role to play in Jamaica’s stronger recovery and I am clear that there should not be any victimisation, any retribution, any malice in how we move away as a government. We must embrace everyone, we need everyone on board for Jamaica to recover stronger,” Holness said, adding that he had received a telephone call from PNP leader Peter Phillips, conceding defeat.

Holness said the call was important since it was also very sportsmanlike and dignified, and that he had informed the 70-year-old Phillips, who has indicated he would be stepping down as opposition leader that he had put up a “good fight”.

Voting here had been marred by the death of a woman at one of the polling stations and Holness said he had extended condolences to her family.

The election had been held in the coronavirus (COVID-19) pandemic environment that prevented the political parties from staging their traditional campaigns including rallies and motorcades.

And as he delivered his thank you message to the nation, Holness, in his virtual address, promised that his new administration would continue to put in place policies aimed at stemming the spread of the virus that has affected 2, 827 and killed 27 others.

Holness said that while he was pleased with the “large mandate” given to his party, he had also noted that many people had stayed away from voting on Thursday for several reasons, including the COVID pandemic.

Political observers note that while in 2016, there had been a 47.7% turnout of voters, this year the figure could be just above 40%.

“We are still considerate of those Jamaicans who still look on with some suspicion, some concern, and some apathy on the political process. So we are very cautious in our approach to receiving this overwhelming majority.

Holness said while he was happy to have won the election, he wanted to give the nation the assurance that “I do carry this burden with great consideration of the expectations of not just those who elected us, but those who are looking on us for future decision as to whether or not they will participate in the process”.

Holness, 48, said that the mandate given to his party is indisputable, but he warned that the government would not be dogged by allegations of corruption as had been the case over the past four and a half years.

“In our last government the narrative of corruption dogged us. It is not something we can hide away from and I want to be clear because there are many persons who will now be assuming state authority, who may not have the understanding as to how that authority should be used.

“They will know clearly that this government does not stand for corruption. We have as a country managed to come to consensus on fiscal matters, on monetary policy. There is an evolving consensus on crime and violence… we have a consensus developing on growth policy bur there must now be a clear consensus, a strong position on anti-corruption,” Holness said.

The elections saw the defeat of several prominent PNP legislators including Peter Bunting, who had challenged Phillips for the position of party leader earlier this year.

PNP Vice-President, Phillip Paulwell, said that the population was still of the view that the party was not united and that could have played a major factor in the defeat.

“We have to acknowledge that people don’t support a party they believe is disunited,” he said, adding that the PNP did not have time to show Jamaicans that following the leadership race, the party had become a united force.

“It is a shocking defeat, we have seen, therefore, all of us will have to accept full responsibility,” he said, adding that the party hierarchy will meet on Friday to examine its loss.

Among the PNP legislators that survived the polls was its spokesman on foreign affairs, Lisa Hanna, who won the St. Ann South Eastern seat by a mere 24 votes. The party also lost its traditional seats in the Westmoreland areas.

Pollster Don Anderson, speaking on a television programme here, described the defeat as “a major shift” adding “the writing was on the wall.

“The results are startling,” he said, adding “there is total dissatisfaction with the PNP right across the board”

Anderson, who had predicted the PNP defeat, said the results also showed that the party had not only been soundly rejected by the electorate, but that the front runners to succeed Phillips had also been found wanting.

“This is a massive loss … it was on the cards but the extent represents a huge shift from the PNP to the JLP,” he said, adding that the defeat could not be blamed on COVID.