PM tells Labourites forget grumbles; get ‘on your marks’ 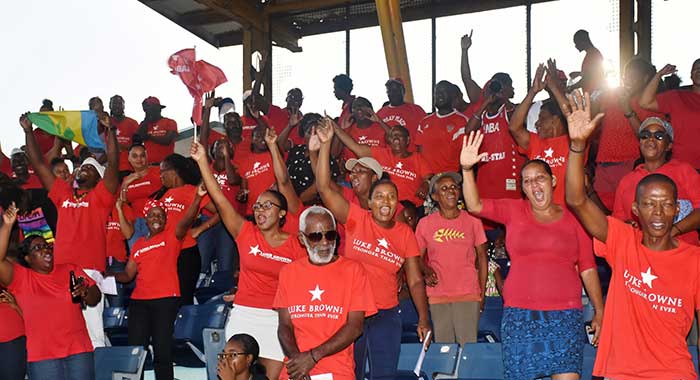 Political leader of the Unity Labour Party, Prime Minister Ralph Gonsalves, used his speech at the party’s national council last Thursday to urge party supporters to forget about their grumbles and prepare to vote.

“This is a family; we may have our grumbles and our frustrations. But when you’re on your marks, you leave the frustration and the grumbles. We stay together because we have done much. And we have many, many more rivers to cross in the interest of St. Vincent and the Grenadines to lift our country higher.”

The ULP is seeking an unprecedented fifth consecutive five-year term in office in general elections that the prime minister has said will be held by year-end, ahead of the March 2021 constitutional deadline.

“We got to do it together as a Labour family. It’s love. And where we have setbacks, we turn them into advances. This is not the time anymore to grumble about this or that.  This is a time to celebrate our progress and to lift our country higher for ourselves, our children and our grandchildren to take it to higher heights,” said Gonsalves, who has been prime minister since his ULP came to office in March 2001.

“This is a bit of nostalgia for me because this is the last time I will preside at a national council meeting where candidates for general elections have been selected,” the 74-year-old leader said.

“We have to make sure that in these elections, we don’t stumble at all. And if anybody stumbles, someone must be there to hold us up and take us forward to victory. Everybody who has been selected has the most important quality: love for the people of St. Vincent and the Grenadines,” he told the gathering at the Arnos Vale Sport Complex in a speech broadcast on his party’s radio station Tuesday night.

Gonsalves individually endorsed each of the party’s five new candidates and said that he and the other nine — including eight parliamentary representatives — who have faced the polls before “are warriors and I am the most seasoned of all the warriors”.

The ULP leader said he was “born with a rebel seed”.

“I am now a mature and wise rebel. I keep a patience and a calm. When everybody around losing their head, I keep mine. But I keep it focused on fighting always for the people.

“And anytime you have any uncertainty or any problem and you hear me get up in Parliament or on the radio and calm you and say we have a way out of this difficulty, we have a way out of this challenge on every single occasion, every single occasion, when challenges which crippling other countries came by us from outside, we have been able to meet satisfactorily those challenges and keep the ship of state going forward in progress and prosperity and improving the lives of ordinary Vincentians,” the prime minister said.

Gonsalves said he has been a political activist for 52 years, adding that he is the only person in St. Vincent and the Grenadines who has contested every election since 1979, when SVG gained independence.

“I put my bucket down among the people in love and caring and my runs are on the tins. Those who want to beat them off ha’ to go to the wicket of leadership, but in these difficult and perilous times, this is not a time for a trainee.

“This is not a time for an apprentice. This is the time for a seasoned warrior and a master builder who has a record of service to the people of St. Vincent and the Grenadines,” he said.

The ULP main challenger is expected to be the New Democratic Party, which control seven of the 17 parliamentary seats.

The ULP has been governing with a one-seat majority since 2010, when it lost four of the three seats that it held since 2001, when it secured a 12-3 victory, which it also repeated in 2005

In 2015, the ULP held on to government by a one-seat majority, a repeat of the 2010 election result.

6 replies on “PM tells Labourites forget grumbles; get ‘on your marks’”