‘We are indeed ready for the reopening of schools’ — PS 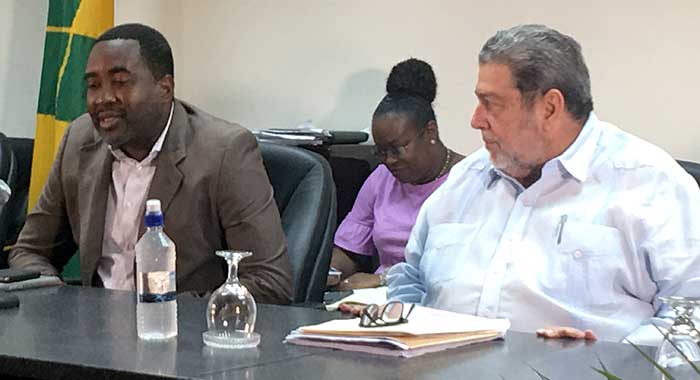 “Contrary to what is said in terms of preparation and readiness, it is the view of the Ministry of Education that we are indeed ready for the reopening of schools on Monday.”

This was the opening sentence of Permanent Secretary in the Ministry of Education Myccle Burke as he addressed a press conference on Friday that Prime Minister Ralph Gonsalves hosted to address matters related to the reopening of schools.

Students in St. Vincent and the Grenadines — except those at Buccament Bay Secondary and some the Community College students — return to the classroom on Monday, one week later than the scheduled commencement of the 2020-2021 academic year.

However, unlike previous Septembers, they are doing so amidst the coronavirus pandemic, 61 cases of which have been confirmed in SVG, three cases of which remain active.

“As the prime minister communicated as well, readiness is not one hundred per cent, but if we are able to check most of the boxes, we consider that to be ready,” Burke said.

“So we have been working with all the different entities, the government organisations to get schools ready.”

He said that temperature checks and facemasks are critical to the reopening of schools.

Under the latest protocols, students are expected to wear facemasks from their home to their school, where their temperature will be checked.

If the student’s temperature is normal, they will be allowed to remain in school and would not have to wear their facemasks during their lessons.

Burke said that his ministry had, in hand, “a quantity in excess of 1,000 thermometers.

“Distribution has commenced; distribution will continue. We had in hand — because they have already been distributing — a quantity in excess of 30,000 facemasks that we received from different organisations, different companies and we have commenced the distribution.

“So come Monday, each child can be assured that they will have at least one face mask to use,” adding that the country will receive 45,000 face masks and distribution was expected to continue on the weekend.

He said that the Roads, Bridges and General Service Authority (BRAGSA) had been working “assiduously’ and their work has to be commended.

“They have gone above and beyond to ensure school is ready. So they have installed additional hand wash stations at various schools and they have addressed other concerns that were communicated.

“In fact, BRAGSA is just a call away and they are always willing and able to accommodate the request of the Ministry of Education, communicated by the principals and the different organisations,’ Burke said.

The permanent secretary said that schools were given the generalised protocols and over the past week, when teachers returned to schools, the protocols were individualised for each institution.

“They were given the general protocols but because the situation at each school is different and of the uniqueness of schools, we saw it fit that schools use the week to work with their teachers, their staff on the individualised protocols. We saw this as critical. You may note, as well, that there is a communication from the Royal St. Vincent and the Grenadines Police Force,” Burke said.

“So they have been working with us; we have had several discussions.”

Burke said that his minister has had several interactions with the Cabinet.

“I can say that sometimes the Ministry of Education feel as if they are part of Cabinet. The prime minister has said that there have been numerous visits to Cabinet and we must commend the government and Cabinet for partnering with us in ensuring that students, when they return to school, they return to a safe environment,” Burke said.