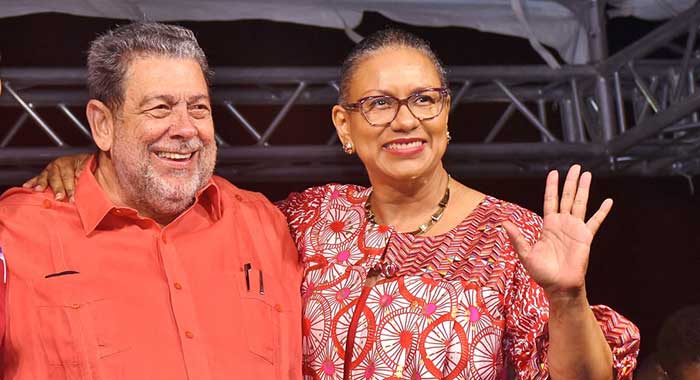 The wife of Prime Minister Ralph Gonsalves, Eloise, is battling a “potentially debilitating” spinal cyst, while his second son, Adam — from a previous marriage — has been diagnosed with “a debilitating cancer”.

The prime minister disclosed the medical conditions on Wednesday during his weekly show on the state-owned NBC Radio.

Gonsalves made the disclosure as he urge citizens not to lament over their various situations.

He said that some people might dismissively say he could talk because he is prime minister.

“Well, in some respects, that is true. It’s an honour to be the prime minister and there are certain things I don’t suffer like other persons, but it’s not an easy life,” said Gonsalves, who will this year seek re-election to a fifth five-year term in office.

“I mean to be up 4 o’clock in the morning to work and work consistently all throughout the day and late into the night. But in addition to that, I am a human being you know. I need supports in all sorts of different ways.

“At the moment, for instance, two people very close to me, one of them my son, Adam, he’s [Minister of Finance] Camillo’s younger brother. Camillo is close to him, very, very close,” Gonsalves said of the two sons from his first marriage.

“Adam has been struck by a debilitating cancer. He is only 38 years old,” the prime minister said.

He then went on to speak about his wife’s condition.

“And then, I have to be making arrangements to go away for about a week or so. Eloise may have to stay longer. I am hoping that I can leave maybe sometime next weekend, God’s willing,” the prime minister said.

“Eloise has a cyst growing on her spine and we had known for a few months and we have had it investigated and we consulted a neurosurgeon in Cuba, consulted in Trinidad and there is an American of Indian descent who came to St. Vincent who we got to know, who is a top neurosurgeon and he works in Boston, I want to go and see.”

The prime minister said that the cyst has the potential to significantly affect his wife.

“It’s potentially debilitating the way the cyst has grown and it causes great discomfort and she could end up in a wheelchair and it’s — we don’t know –well we will find out more.

He mentioned that his government recently had to help a nurse who is in her 20s with in excess of EC$40,000 to help to do a neurosurgical operation on her brain.

“Of course, in Eloise’s case I can’t go to the government for any resources to help with medical so we do like what everybody does. You try and organise it, whatever financing.

“But I was really onto the issue, what is triggered in my head is the issue of lamentations. We don’t have to be negative. That’s not how Chatoyer and the Garifuna confronted British colonialism,” he said, referring to the country’s national Hero, Joseph Chatoyer.

“That’s not how in the depths of a condition called slavery that our African forebears found strength to build and to come out of what is worse than Dante’s hell and the same thing with the Madeiran and Indian indentured servant.

“And we have built a viable civilisation. We have a lot of challenges and we have some tremendous vulnerability. Don’t bother with people with pie in the sky solutions and mirages,” the prime minister said.

“Mirage is for carnival day, not life, living and production,” he said in an apparent reference to a carnival band.