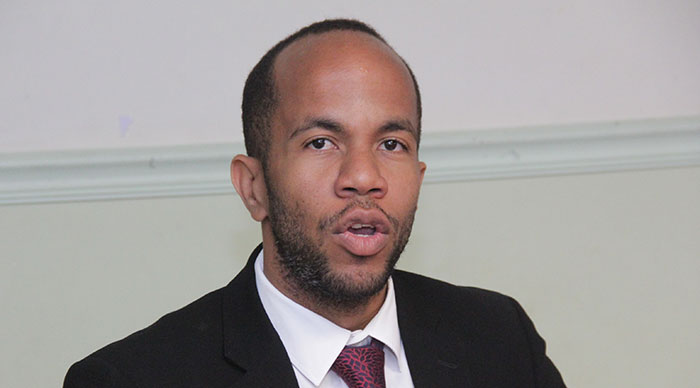 Minister of Health, Senator Luke Browne was absent from and was never mentioned by his staff not even to excuse his absence from Tuesday’s press conference. (iWN file photo)

Minister of Health Senator Luke Browne was absent from and was never mentioned at a press conference in Kingstown, on Tuesday, amidst the dengue fever outbreak that has claimed at least two lives in St. Vincent and the Grenadines.

A number of public health officials, including Chief Medical Officer Dr. Simone Keizer-Beache, spoke at the one-hour press conference, which was held one day earlier than scheduled.

The press conference, which was announced around 3:45 p.m. on Monday, was initially scheduled to take place at the Ministry of Foreign Affairs conference room at 10 a.m. Wednesday.

However, the Ministry of Health informed the media at 10:30 a.m. Tuesday that the press conference would be held at 2 p.m. that day at the Cabinet Room, also located in the Financial Complex

Chief Health Promotion Officer in the Ministry of Health, Wellness and the Environment, Patsy Wyllie, who chaired the press conference, gave no explanation for the minister’s absence as she welcomed the media and introduced the speakers.

Permanent Secretary in the Ministry of Health, Cuthbert Knights, who informed the media about the press conference and its adjusted time, also did not attend Tuesday’s press briefing.

In her comments, Keizer-Beache thanked the media for attending the press conference “at such short notice” before she went on to give an overview of the dengue situation in the country.

She said that as of Monday, there were 374 laboratory-confirmed cases of the mosquito-borne illness in SVG.

Keizer-Beache spoke of the level of demand on health care services, saying that in all of August, there were 50 persons going to the emergency room at MCMH with a diagnosis of dengue fever.

“As of Sept. 20, we had 167 persons seeking care, of which 59 were admitted. Thirty-seven of those were children.”

She said that two dengue-related deaths — a middle-aged female and a 9-year-old boy, both from the Calliaqua district — had been confirmed as having died of dengue-related complications.

The CMO said that in terms of its response, in June-July, the ministry issued a release saying it was noticing an increase in the number of dengue cases.

“And from then, we started putting out information about how do you reduce your exposure. Basically, we were stressing source reduction,” she said, noting that dengue is spread by a mosquito.

“So we have continued increasing our response and we have our dengue response plan,” she said, adding that the plan is estimated to cost a further EC$29,000 in the next few days on health promotion, the most costly component.

“That will be to increase persons’ understanding, both patients, and health care workers in terms of what’s required.”

Regarding reducing the mosquito population, the ministry estimated that EC$210,000 is required to pay for this.

“And we are also going to employ an additional 10 doctors and six nurses,” Keizer-Beache said.

She said additional staff is needed because of surge capacity, noting the number of persons turning up at the emergency room, which has to also cater for non-dengue-related emergencies.

“So we need to be able to treat these persons,” she said, adding that an important part of dengue management is the early intervention in moderate cases.

“That’s how you are going to protect and save lives and so we have to increase our capacity to provide that care,’ she said.

Keizer-Beache said her ministry will extend services at the Kingstown District Clinic to 7 p.m. as of today (Tuesday).

She reiterated that, as announced on Monday, the ministry will also use the Argyle Isolation Facility and will increase beds at MCMH to care for the additional dengue cases.

The ministry has reached out to the Pan American Health Organization for additional support for health promotion vector control, and specialist services.

“A lot of the reports have been that we have increased numbers of paediatric cases. Our under 15 (patients less than 15 years old) numbers are around 51% [of all cases] and we are having challenges in terms of the management of these cases, especially where we have renal (kidney) impairment in children.

“So we have asked PAHO to help us with a paediatric nephrologist and we might also get other support as need be,” Keizer-Beache said.