MP threatens to break down shop at primary school 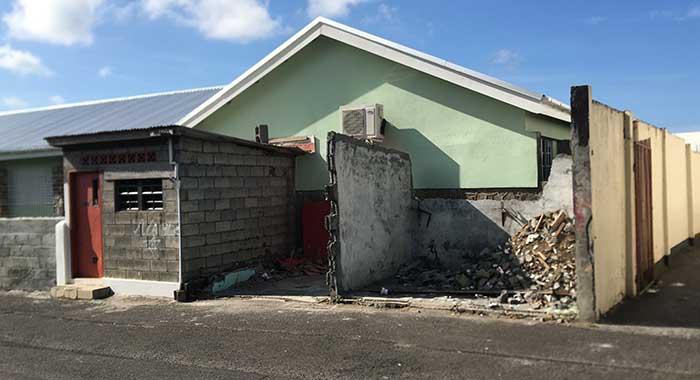 The Kingstown Government School at Stony Ground, where one of three stops adjoining the school was not demolished. (iWN photo)

Opposition lawmaker Daniel Cummings says that if the New Democratic Party (NDP) is voted into office, he would personally knock down a shop built onto the Kingstown Government School, located at Stony Ground.

Cummings told his party’s virtual campaign rally on Thursday, that the shop remained attached to the school, although he had been asking the government, since Girlyn Miguel was Minister of Education, to remove it as it creates an air circulation and heat problem.

The shop was one of three located on the compound, and the other two were removed during the recent rehabilitation of the school, Cummings said.

“Could you imagine that? Parents, teachers, students are not as important as somebody who has no right to be there, whose only claim to fame is a strong supporter of ULP. That is the kind of government that we have to get rid of. The children and the teachers must enjoy their environment.

“And I challenge them you know. Knock it down because when we get there, I, myself go knock it down,” Cummings said.

When police failed to act several years before Cummings got into politics on his complaints about noise from a church in his Redemption Sharpes community, he took to the church with stones.

“Ah telling yo, I meself go go there and knock it down because you can’t put the rights of the child ahead of one individual for party politics.”

Cummings further warned NDP supporters that they would not be allowed to violate the law because of their political affiliation.

“And I say this, I can’t help out sending a stark reminder of all supporters of the New Democratic Party because I think it must be said and I am sure that [NDP leader] Dr. Friday would one hundred per cent agree with me. This New Democratic Party is not going to put up with nonsense form anybody, not even our supporters.

“You must do the right things. You must do the right things. We cannot for 20 years complain about the wrongs of this rogue regime and go there and allow the same things to continue. We must start anew; we must build our country with all of us going forward. If you don’t want to work, you could go. Once you work, you must be paid your wages. That is what it is about.

“If all of us are not allowed to function properly, we cannot benefit. That is the message that Dr. Friday has been sending.  You think the ‘One Nation, One People One Vincy’ is a simple slogan? It’s deep, it’s real.”

Cummings said he comes from a Labour family, with his father being a strong supporter.

He said that he was following some of the comments on the live feed of Thursday’s meeting.

Addressing persons who still support the ULP administration, which is seeking a fifth five-year term in office, Cummings said:

“Listen, when I followed my father to every meeting in the Market Square, Labour was a noble organisation. Labour will never allow foreigners to come here, buy a property and run it, where the former employees didn’t get their severance pay and not give dem people their severance pay. That is not Labour.”

He was speaking in apparent reference to Sandals Resort International’s acquisition of the former Buccament Bay Resort property.

“What you have now is one family take over Labour and doing everything against what labour stands for.  So, tonight, all you ‘half-way Labours’, all you floating Labour people, come on over, come on over and face a new life. Come and find a refreshing environment where you can be yourself, where the values are that Labour stood for.”

He said that the NDP is the only organisation in SVG in which the values of real Labour is enshrined.