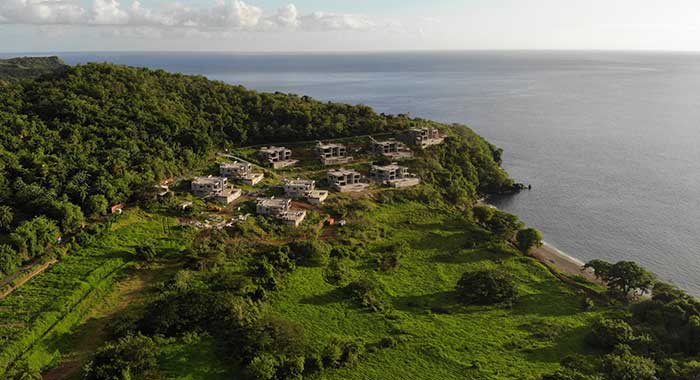 The main opposition New Democratic Party’s candidate for Central Leeward, Benjamin “Ben” Exeter is warning his constituency against being dazzled by what he says is the Unity Labour Party’s (ULP) “sweet promises just before election”.

“The ULP understands their power, they create a cycle: neglecting you for four and a half years, then bringing sweet promises just before election; promises that expire once they are re-elected to office,” Exeter told the

“You’ve seen it. We’ve lived through it. They give a little and then take so much. Don’t give them that chance again,” said Exeter, who is making his second bid to be elected Member of Parliament for Central Leeward.

“And we are the ones who suffer through another four and a half years of abuse, disdain and neglect. It is time to break this cycle.”

Exeter noted that in February 2017, there was the ground-breaking ceremony at Mt Wynne/Peter’s

Hope, for the Black Sands Resort, a project being funded by Canadian investors.

The project was billed as a 400-room, US$60 million investment that would have resulted in 100 local jobs and would have taken 24 to 30 months to complete.

“They said that the project would make Central Leeward the ‘Mecca of tourism’ in St. Vincent and the Grenadines. The Mecca!” Exeter said, quoting Central Leeward MP Sir Louis Straker, who came out of retirement after five years, after Exeter’s bid, and was re-elected MP.

“What did we end up with? The selling off of 35 acres of our prime land for little over EC$4.45 per square foot, 10 blocks of unfinished concrete structures, and no jobs; not one,” Exeter said.

“The project is dead. Our land is gone. So, what next?”

He said that the ULP has come up with “a new shiny gift” in the form of a 250-room government-funded hotel at Mt Wynne that will be branded and managed by Marriott.

“More promises — and I quote, ‘Mt Wynne will be well on its way to becoming the new luxury hotel strip on mainland St Vincent,’” Exeter said, recalling the words of Minister of Finance Camillo Gonsalves in August 2019, when he announced that the state-owned hotel will be operated by Marriott.

“First the Mecca — now it will be the new luxury hotel strip, and we must be prepared for the influx of tourists.”

The opposition politician said that his party welcomes investors to St. Vincent and the Grenadines.

“… but what we don’t welcome is being bamboozled — hoodwinked,” he said.

“What are the terms of these deals when they go bust;

when the promises of tourists flooding the streets of Central Leeward and the creation of all the new jobs go bust?

“Do we get our land back? What are the repercussions to foreign investors who are unable to fulfil their promises?”

He said that in South Leeward, the neighbouring constituency, the government has been silent on the terms of Sandals Resort International’s acquisition of the property formerly housing Buccament Bay Resort.

“Are landowners and former employees going to benefit? Who knows? The deal is a secret,” Exeter said, adding that investments must not solely benefit the investor but Vincentians as well.

He said the lack of inclusion of Vincentian business owners, entrepreneurs, fisherfolk, farmers and other stakeholders in the hospitality sector leads to a disproportionate distribution of wealth and power, in the hands of the very few.

“We have nothing against investment. What we find fault with, is a government operating in the shadows – in darkness.

“Instead of transparency, we get… silence. A condescending silence because their arrogance permits them to act with impunity.

“Their callous, abusive behaviour makes them believe that they are above you, the people, and therefore, not accountable to you. They’ve bought into the idea that they, alone, hold the power.”

‘This cycle must end.’

Exeter, however, said this is a fallacy.

He said that like clockwork the ULP administration has come with their galvanize, cement and lumber.

They’ve presented their flimsy promises of scholarships and other incentives. They’ve advertised all the projects that spring up with the promises of job creation — these attractive, shiny trinkets that they like to dangle in year five disappear shortly after. Their manipulation and trickery are on full display for all of us to see.”

Exeter urged constituents “to not be fooled by such blatant manipulation”, adding, “We don’t want a government that comes once every five years with gifts.

He said that when the ULP comes with its “boldface false promises, tell them that foolishness don’t live here no more, and you are returning that package to sender.

“When they come with Peter’s Hope – Black Sand project — return to sender.

When they come and tell you to hold on, an influx of

tourists are on their way — return to sender.

When they come and beg you for your vote, tell them that they have the wrong address.

Tell them that the one they have been fooling and abusing has moved; has moved on to a new address.

Has moved on to Dr. Friday and team NDP

Tell them, that their beg for a vote has been returned to the sender,” Exeter said.