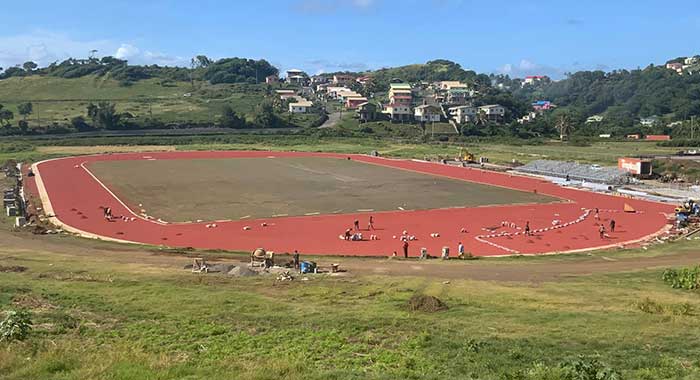 Member of Parliament for South Windward, Frederick Stephenson, says that work is progressing on a number of public infrastructure projects in the constituency.

He told the ruling Unity Labour Party’s (ULP) virtual public meeting on Sept. 16 that work is continuing and progressing very smoothly on the Calder main road.

“Work is on-going on the athletics track and football field in Diamond,” the minister said, referring to the project that has come to replace the national stadium that the ULP promised before coming to office in March 2001.

“A wonderful project there,” Stephenson said of the track and football field.

“I can’t wait for that place to be completed so that I can beat Jimmy, Ces, and Baffy Curtis in a 100 metre race,” he said, referring to MPs for Marriaqua and West St. George, St. Clair Jimmy Prince and Cecil “Ces” McKie and the ULP’s candidate for West St. George, Curtis King.

“The design for the bus stop at Diamond is nearing completion,” he said, adding that he had been told that constituents might have to wait “a little longer because there might be some realignment in the road network there because of the new Holiday Inn hotel that is going to be built at Diamond.

“So I wanted the people in Diamond to bear with us a little while. Your bus stop is coming while we are having a brand new Holiday Inn Hotel there.

Stephenson said that the Roads, Bridges and General Services Authority (BRAGSA) has done the assessment for the asphalt repair work to the Simon, Burnham, Bottom Calder, Calder Ridge and Carapan Village and Chilli roads.

“Three pieces of earthen roads in Diamond are to be graded and stabilised,” he said.

“Very soon, we should see the ground-breaking works for the Holiday Inn hotel at Diamond. There’s also an earthen road in Peruvian Vale, which would also be stabilised and concreted”

The South Windward representative, who will seek a third five-year term in office, thanked the BRAGSA employees based in Biabou, who he said told him they were looking at a design for the Sybil Peters bridge in Simon.

The early childhood centre at Biabou is complete and an official ceremony will be held very soon,” Stephenson said.

“I want to thank the BNTF and the Caribbean Development Bank for the tremendous work that they did there.”

The MP said he would seek to work with the SVG Teachers Credit Union for improvements to a piece of road in Cedars that leads to the credit union’s new development project.

“And there’s also a portion of road in Cedars that leads from an old bath that we are looking to do.

Stephenson said new developments in St. Vincent and the Grenadines, which will have an impact on job creation for all Vincentians include hotels at Diamond, Mt Wynne, Peters Hope and Ratho Mill.

He also mentioned the acute referral hospital to be built at Arnos Vale, the new port to be constructed in Kingstown.

He told ULP supporters, undecided voters, and first-time voters that the ULP “is the only party of choice”.

“The wise men and the wise woman followed the star and I know that Vincentians are wise and they will continue to follow the star, the Unity Labour Party,” he said.

The star is the symbol of the ULP.

“Let us continue to lift St. Vincent and the Grenadines higher. South Windward is alive with Gustus for five,” Stephenson said. The ULP is seeking an unprecedented fifth term in office and Stephenson will again face off with Noel Dickson of the main opposition New Democratic Party, whom he defeated at the 2015 polls by 759 votes.

2 replies on “MP gives update on projects in South Windward”