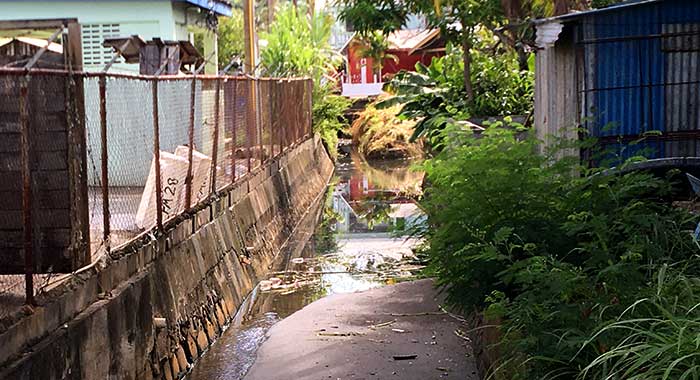 Even after two persons had died of dengue, this waterway near the seashore in Calliaqua., like many across the country, remained clogged in late September. (iWN photo)

The areas where dengue is most prevalent in St. Vincent and the Grenadines have one thing in common: streams the flow of which is negatively affected by sea wave action.

And, on Thursday, Neri James, chief environmental health officer, confirmed that this geographical reality has contributed to mosquito breeding.

“Yes, those spots have streams and where the streams are, there is wave action. As a result of that, the flow has been stopped and we have observed that, yes, there are indeed breeding sites,” James told a Ministry of Health press conference in Kingstown on Tuesday.

“So we are in the process of having a project to ensure that those streams are being cleared,” he said, but added that health is a shared responsibility.

“The issue of us waiting patiently for the team to actually fog, it is not the best. So each of us is asked to do each of us part. You can do a simple thing. Inspect where you are living twice per week,” James said.

At the same press conference, Shamanti Labban, acting Senior Environmental Health officer, was asked whether there was any geographical feature that might be counting to the high number of cases in the specific health districts across the country.

“Basically, we are seeing a number of cases in the Kingstown areas, the Pembroke areas as well as Calliaqua. These are the three areas where we have seen the most cases. Now, the reason for this could possibly be that these areas are high density areas…” Labban said, referring to the human population.

She told the press conference that her unit has adopted an integrated mosquito management, which is an effective programme and utilises a combination of techniques to control mosquitoes at all life stages.

Labban said that this year, the insect Vector Control Unit is engaging in source-reduction activities, which include the elimination of mosquito breeding sites, the application of larvicide, and fogging operations — or adulticiding.

The unit has also had one-on-one communication with householders, informing them of mosquito breeding sites and how to identify them; health education sessions at clinics, schools; continued surveillance at ports of entry; and inspection, treatment and placing of fish in rivers, streams and drainage systems.

The unit has also been working along with the Health Promotion Unit is order to educate the public.

It is easier to eliminate the mosquito before it becomes an adult, Labban said, adding that persons must take steps to eliminate breeding sites around their homes.

“If you have a water container and you are not using it, it is important that you overturn this and store it in a dry place so that it would not be able to collect water. It is important to screen drums and other water containers to prevent the entry of mosquitoes. It is important not to litter because as much as a teaspoon or a capful of water is enough for mosquitos to breed in. Tyres should be stored in an area where water cannot accumulate in them.”

Labban urged persons to discard all old appliances, as these can be a source of mosquito breeding.

Million fish can be placed in larger bodies of water and it is important to check around the home once per week for mosquito breeding sites, she said.

Personal protection includes applying repellent, Labban further stated, and reminded persons to be mindful of the length of time the repellent remains effective after being sprayed.

“Without a drop, the cycle would stop,” she said, reminding listeners of how mosquitoes breed in water.

One reply on “Stagnant rivers contributing to dengue outbreak”