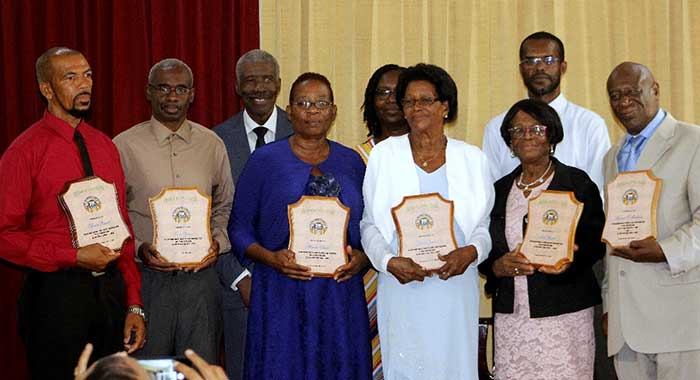 The Seventh Day Adventist Church at Fountain gave back to the community of Fountain and Belair when it recognised and honoured six retired educators and civil Servants at its homecoming and honouree/award service held at the church building.

At the Sept. 26 event, the church recognised the awardees’ outstanding contribution to nation building and their active involvement in the communities of Belair and Fountain.

Following at the citations:

Theodore Huggins: Mr. Huggins was not only an educator, but he was actively involved in the community work and serves as a coordinator of the Red Cross Affiliate, NEMO affiliate, a netball player, netball coach, national volleyball player and coach of the National Volleyball Team.

Mr. Innis Primus: Mr. Primus continues to offer evening classes for children especially for those preparing for CPEA and as an invigilator for CSEC.

Mrs. Marlene Wright: Continues to use her culinary skills in cake baking and decorating for the community, as an invigilator and supervisor of external and tertiary examinations.

Taught adult evening classes in the community of Belair.

Each honouree was presented with a plaque in recognition of their outstanding contribution to community and nation building.

This event formed part of activities to commemorate the 70th anniversary since the church was established in the community of Fountain in 1950.