2020 elections are about ‘a lot of fundamental issues’ — Camillo 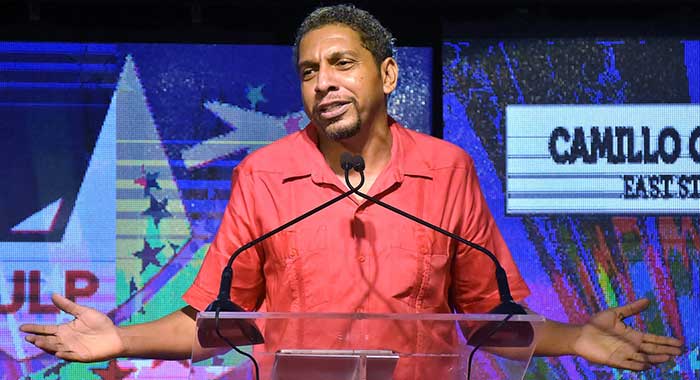 The 2020 general elections are “about a lot of fundamental issues,’ says Minister of Finance and MP for East St. George, Camillo Gonsalves.

He told the Unity Labour Party’s virtual public meeting last Wednesday that the election is about young people who have, through PRYME, realized their dreams of becoming entrepreneurs or expanding their businesses.

“This election is about a tennis prodigy from Fair Hall and a football phenom from Calliaqua, both attending university and developing their talents in the United States, thanks to government assistance,” he said, referring to two communities in his constituency.

“It’s about record numbers of university scholarships, record levels of Community College and UWI enrolment and record numbers taking advantage of the YES and the SET programmes.

“This election is about a COVID pandemic that brought the entire world to a standstill. And it’s causing economies around the globe to grind to a halt while the ULP keeps us safe, keeps us open, keeps the economy afloat and directly touches over 15,000 Vincentians with income support from hospitality workers, to minibus operators, to cruise ship workers, to vendors, to handcart operators, to vulnerable citizens,” Gonsalves said.

He said that Minister of Agriculture, Saboto Caesar had told him that that same week, 2,358 farmers received the initial drought and COVID support payment of $500 each.

“So we spent $1.2 million in the first three days of this week to those 2,300-2,400 farmers and in the coming days another 1,600 farmers, Sabby tells me, will also receive their initial payment.”

He said the polls are also about which party has a plan to make the Argyle International Airport work and attract more hotels and jobs to St Vincent and Grenadines.

“Who has a plan to expand the fisheries sector and employ more fisher folk, to further develop call centres, and employ hundreds more young people, to develop a modern port, and a modern referral hospital, a credible plan to combat climate change, a plan to make St. Vincent and the Grenadines a credible, respected and influential voice on the global stage and who is taking a principled stance on a host of crucial issues from reparatory justice to non-interference in sovereign affairs to whether or not we have the rights to pretend that the 24 million residents and citizens of Taiwan do not exist.