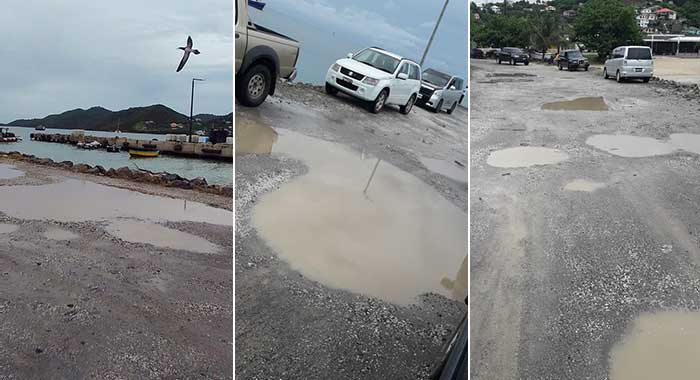 The situation at the temporary wharf in Canouan this week.

Member of Parliament for the Southern Grenadines says that the temporary stone and dirt wharf in Canouan, where billionaires are said to go to avoid the millionaires of Mustique, is evidence of the government’s neglect of the island.

Terrance Ollivierre said that in response to that reality, his New Democratic Party (NDP) has a developmental plan for port facilities in the Grenadines.

“The plan includes a comprehensive port and terminal facility upgrade.

“The ULP has a long history of failure and broken promises not only in Canouan, not only in the southern Grenadines, but throughout St. Vincent and the Grenadines,” Terrance Ollivierre told an NDP public meeting in Canouan on Thursday.

He said that most of the development in Canouan and in the Grenadines as a whole came under the NDP, which was in office from 1984 to 2001.

“When NDP was building the airport, you know what they said? They said, it’s for donkey and cattle and goat,” Ollivierre said of the airport, which the Unity Labour Party administration, which came to office in March 2001 has upgraded to a jet airport.

He, however, said that while the ULP met an airport on Canouan, as it relates to the facility, they are behaving like someone who inherits a house, adds a kitchen and a bathroom to it and claimed that they built it.

Ollivierre, who is seeking a fifth five-year term as MP for the Southern Grenadines, said that it was the NDP that built the wharf in Canouan.

“But look at its condition, and how you want people in this country to live,” Ollivierre said.

He said that since being elected to Parliament, he has been raising the issue of the repair of the wharf.

“And I have been putting the question for him since then, 2001, to fix the Canouan seaport. Year after year, you’ll get the budget. And the budget by January, it will be one figure; when you go back in in September, you’ll get another figure and that continued year after year.

“And when they get fed up, they say, ‘Mr. Speaker, how often can this question come to the Parliament?’

“So for years, over 15 years, every time you talk about the Canouan Wharf, you’ll get different estimates, you get a different contractor, you get a different time when it is going to be fixed and year after year, the money to fix the wharf going up, up, up and up to now, you cannot get the wharf. Truly, it’s a burning shame,” Ollivierre said.

At the same time, several persons have been injured at the wharf while trying to assist with the berthing of vessels, the opposition lawmaker said.

“Rope burst, hit you in your head, hit you on your hand — break hand — because there is no proper place for the boats to tie up,” he said.

“But do they care about you, that the wharf is in such poor condition that even you from time to time, the people, get injured?

Ollivierre asked how the ULP could then be so “boldface” as to ask residents of Canouan for their votes.

“What we voting for you for? You have let us down and you haven’t done anything to make sure that we have a better standard of living,” he said.

The MP said that the current situation is hindering progress and affecting businesses on the island.

“Because when the yachties want to come ashore to buy their supplies and the wine and everything, they have no place to land.

“Is a young man had to go and get a ladder for himself and hook it up on the wharf so that the yatchies will be able to tie their dinghy and come ashore and to shop at the business places. So how can you, a business man in Canouan — or woman –support a Unity Labour Party who cares nothing about you?”

Ollivierre said if the party cared about the island’s development it would have fixed the wharf a long time ago.

He said that because of the condition of the wharf, yachties go to Bequia, Union Island or even Grenada’s Carriacou to resupply their vessels.

Ollivierre said the problem of poor port facilities also exist throughout the islands, adding that he would deal with the situations in Mayreau and Union Island when he visits those islands.

“But hear what, the New Democratic Party has a developmental plan for port facilities. The plan includes a comprehensive port and terminal facility upgrade.”

He said the NDP would not merely build a place for persons to shelter from the rain or sun at the port.

“Because this terminal building, we are going to make sure that you have small shops that you can sell your handicraft, or you can sell your whatever business you want to get into. So it should be a hive of economic activity, thereby giving you the opportunity to earn a living.”