‘I am here to try to make lives better’ — Opposition Leader 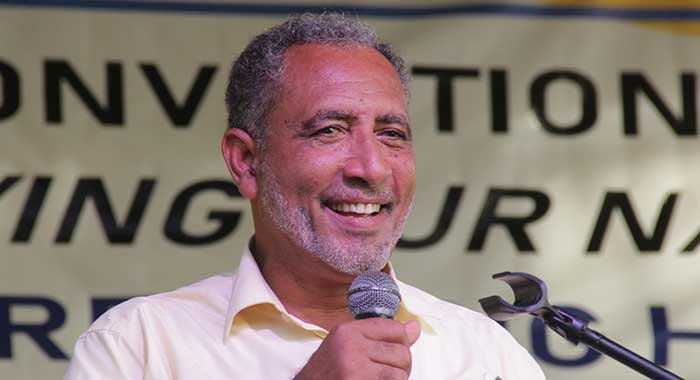 Leader of the Opposition Godwin Friday says he is not running to become prime minister so that he can prove that he is smarter than anyone.

“I want to be prime minister of this country not to prove that I’m smarter than anybody else. I am not here to prove any theory right or wrong or to talk about things, all this academic gibberish, that doesn’t deliver a single job for the people in this country,” he told a New Democratic Party (NDP) public meeting in Canouan on Thursday.

“I am here to try to make lives better. And whatever it takes to do that, we will do it, so long as it promotes an interest of the people and maintains the dignity of all people in St. Vincent and the Grenadines,” the Northern Grenadines MP said.

Friday said that the failures of the Unity Labour Party administration “have been monumental failures”.

“We talked about a crisis in unemployment. They get up on the soapbox and they say how they have created more jobs than any other government in the country. But don’t argue with me. Go and argue with the IMF, go and argue with the Eastern Caribbean Central Bank who say that when the government came into office in 2001, 20% of the people in this country — it was very high — was unemployed.

“Today, it’s 26% that are unemployed. That means the situation has gotten worse,” Friday said.

Friday is making his first bid to become prime minister after the NDP’s four electoral defeats under the leadership of East Kingstown MP Arnhim Eustace.

He told voters they should not be swayed by the ULP’s boasts that “they build this and they build that.

“Development is about development of people. It’s not about buildings. It’s not about proving somebody’s theory. It’s not about fancy language about ‘many-sided, postcolonial’ this and that. That is all nonsense. And that’s a polite way of putting it. I’m not here to prove that I’m smarter than anybody else.”

Friday said that nothing degrades humanity more than people living in abject poverty.

“… when you see people who surrendered their humanity because they have to feed their children, when they can’t send their child to school, because, ‘Friday, I can’t afford the shoes.’ I see that every Monday when they go to my office.

How can you say no … because you know it’s real. That is what we are fighting for here in this New Democratic Party. We want to make lives better.”

He reiterated the NDP’s plans to implement a citizenship by investment (CBI) programme if elected to office and the ULP opposition to this.

“We ain’t doing this because we want to prove a point. We’re doing it because it is an avenue, an opportunity for us to bring investment capital into the country to invest in things that will create jobs and make lives better.

“And don’t listen to the nonsense you hear the people from the ULP talking. They say they going to campaign on citizenship by investment, that NDP want to sell passport?”

He said a CBI is not an idea developed in St. Vincent and the Grenadines.

“All the other countries of the OECS have it. St. Kitts has had it since 1984. Countries all over the world, the United States — the richest country in the world — has a programme that says if you come and invest a certain amount of money in the United States, you can become a permanent resident of the United States.

“In Europe, these programmes exist, in Australia, such programs exist. It’s not new to St. Vincent. Grenada, St. Lucia, Dominica all have thriving citizenship by investment programmes.

“And what they’re doing is – they bring in hundreds of millions of dollars. And they use that to improve the lives of people. All those people who’re talking their fancy talk about the dignity of citizenship, their bread is buttered, on three sides…

“They can talk their high talk, because they’re driving two SUVs and they’re going on vacation in the glittering cities of the world because their life is good. They enjoy the privileges of citizenship. But the ordinary person, who trying to make ends meet, they’re telling you that more of you are unemployed now under this ULP government.

“That is a fact. Don’t let anybody tell you otherwise. More people are unemployed today, a percentage of the workforce — 26% are unemployed, as opposed to 20% when the NDP was in office, all of that is still too high. But we want to change that and use whatever levers we have at our disposal to do it and I will do it,” Friday said.