‘Tell Friday a new star is rising in the north,’ ULP candidate says 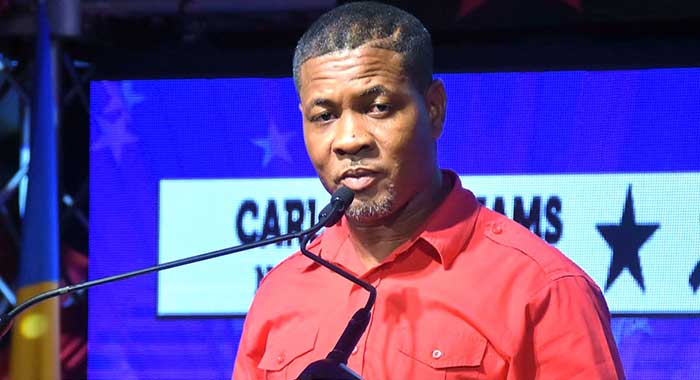 The main opposition New Democratic Party has been put on notice that its dominance of politics in the Northern Grenadines is about to end.

“Tell Friday, and tell Friday this: a star, a new star is rising in the north,” the Unity Labour Party’s candidate for the constituency, newcomer to politics Carlos Williams has telegraphed to area representative, Opposition Leader Godwin Friday.

“Tell him his reign of mismanagement, poor representation is over,” Williams told the ULP’s virtual meeting last Wednesday.

“There is a fresh leadership ready to take his place,” he said.

“For a very long time, Dr. Friday, Friday, Godwin has found himself adrift and continue to drift as a ship that is sailing without a rudder aimlessly when it comes to the people and the representation of Northern Grenadines.

“For a very long time, Friday has been asleep at the wheel.  For a very long time, Friday has taken the people of Northern Grenadines, Mustique and Bequia for granted. This Unity Labour Party has proven over the years and has continued to work tirelessly to improve the livelihood and for the people of Northern Grenadines. it is evidenced in a dedication, health, wellness, sports, culture, and tourism, and housing programmes and initiatives in Northern Grenadines. You will agree with me that much more can be done. And it’s expected that much more will be done. Hold me accountable,” Williams said.

Williams, harking back to the ULP’s campaign slogan of 2015, said, “My friends, labour love all of us but what does that mean?”

Williams said the council will pursue projects that would yield decent jobs, not ‘jobs, jobs, jobs’ but yet they cannot tell you where the jobs coming from,” he said, deriding one of the opposition’s slogans.

“But we will pursue projects that will deal decent jobs across all spectrums of livelihood and skill sets.”

Williams said he will focus on the revitalisation of airports and seaports in Northern Grenadines.

Under the ULP administration, which came to office in March 2001, the Bequia airport, named for former Prime Minister Sir James Mitchell, whose New Democratic Party administration constructed it, went into a state of dilapidation.

“The Bequia airport will be repaired. As a matter of fact, I was told that the repairs will start in about two to three weeks’ time. This is a working government. We’re getting it done,” Williams said.

He said his is a plan for the development of the Bequia port area.

It’s a plan for the area referred to as The Almond Tree. The plan also includes the provision of a modern sea ambulance and rescue vessel to be delivered by the end of this month.

Williams also plans to make tourism, the mainstay of the economy in the constituency, a year round happening.

Williams promised to “reclaim some of those portion of lands as Crown lands”, but did not elaborate.

He said that under his representation, the government will distribute these lands to the locals of Bequia.

“Regularise, we will, the informal settlement of Bequia; Paget Farm land reform, Cemetery Hill and Union Vale; we will transform — this is what I’m telling you what’s the meaning of Labour love.

“We will transform Hamilton waterfront into a hub of culture and festival. We will move to provide facilities on Princess Margaret beach and Lower Bay Beach also in Paget farm, construct a market and convenience in Paget farm. We will work in concert with the Ministry of Foreign Affairs and other ministries to ensure that the Bequia smart centre is constructed and delivered to the people, a centre which will offer engine repairs hospitality training, you name it, in that centre.

“The restoration of Paget Farm Playing Field, the redevelopment of the Clive Tannis Playing Field, we will make sure that it is lighted. We will ensure that Hamilton, Lower Bay and Mt Pleasant that their playing field, as you have been requested, is commissioned. We will strengthen the Bequia on shore committee,” Williams said.

He said that the Paget Farm Police Station will be rebuilt.

The police station has been located at various buildings over the last decades or so, since their original home went into disrepair and the government claimed that the soil there is unsuitable for reconstruction. However, islanders have dismissed tis assessment as bogus.

Williams said a police outpost will be placed on Front Street of Port Elizabeth as priority and steps will be taken to correct issues as they relate to parking in the town.

Williams said that the ULP will address climate change on Bequia.

He further said that local government is critical.

“… we must move to reintroduce local government within the Grenadines,” he said, adding that the government will work with the Mustique Company to ensure and to strengthen the relationship there between the people and the company itself.

12 replies on “‘Tell Friday a new star is rising in the north,’ ULP candidate says”