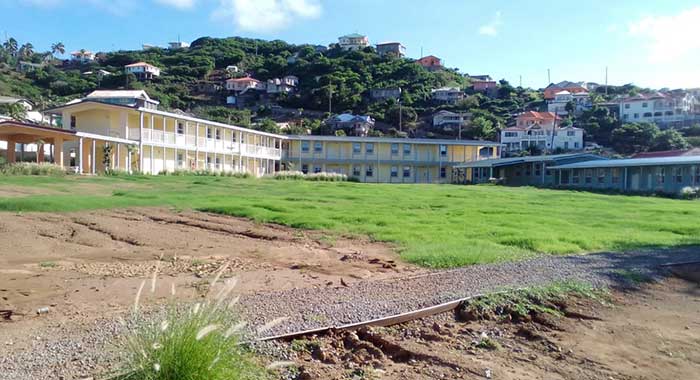 The school compound in Canouan.

The Government of St. Vincent and the Grenadines in July acquired lands in Canouan “for the construction of a public road to connect with other public roads on the north-western and north-eastern boundaries of the land and for the construction of tunnels, culverts and conduits for the laying of connecting water and sewerage pipes and other infrastructural facilities from the former Tamarind Beach Hotel to the Canouan Primary and Secondary School Complex”.

And despite the denials by government official this week that permission had not been given for the building of a sewerage facility on the school compound, the second publication of the Declaration of Acquisition of Land in the Gazette on July 14, 2020 made the acquisition complete.

With the second publication of the notice, the land measuring 4,845 square feet – and belonging to the heirs of George De Roche, together with all ways, water and watercourses, right, lights, liberties, privileges, paths, easement and all other appurtenances thereon or used, enjoyed therewith or reputed to belong or to appurtenant thereto however created or existing is now vest absolutely in the Crown”.

This is the latest development on the 2.93 square mile island, where locals live in the middle third, sandwiched between high-end tourism developments in the north and south.

The matter came to the fore this week, with members of the public as well as the parliamentary opposition expressing revulsion at the idea of a sewerage treatment plant being constructed within the school complex.

‘crazy and not from this world’

Speaking on NICE Radio on Tuesday, Terrance Ollivierre, MP for the Southern Grenadines, where Canouan is located, said that his investigation into the matter revealed that investors want to pump the sewerage from the hotel to the school complex.

“Now, I don’t know who came up with such a grand idea but something has to be wrong,” said Ollivierre, a four-term MP for the area.

“Whoever thought of that move and that [that] will be best the thing, these people have to be crazy and not from this world and not from this planet,” he said on “New Times”, the New Democratic Party’s radio programme.

“… because how can you want to do something like that? You want to move a sewerage system, which belongs to a hotel development and take it to a part of a school, part of the compound of the school?”  Ollivierre said.

He said that he understood that the government acquired the land after the owners refused to sell it to the developers.

“… because they refused to sell piece of their property, acquisition of the land was done in order to make a road and run some of these pipes from that development to carry it to the school,” Ollivierre said.

“Now, how is that possible? Who acquired the land? Who can just acquire people’s land and put their money where they want to put it? Who made the land acquisition? Who came with the idea of putting such a sewerage system on the compound of the school?” Ollivierre said, adding that he did not know about the development until it became public on radio and social media this week.

Ollivierre said that on hearing about the matter, he decided to investigate.

“And the investigation revealed that this is what is happening. And, clearly, we cannot allow that to happen. It cannot happen. Why would you want to so such a thing? What is the reason you want to remove it from such a place and why do you want to carry it there? And is that the only place you can see to carry it?”

Meanwhile Daniel Cummings, MP for West Kingstown, speaking also on New Times, said that for such a development to take place, it has to have the approval of the Physical Planning authorities.

Cummings, a water engineer and former general manager of the Central Water and Sewerage Authority (CWSA), said that the CWSA would also have to give its blessing before Planning could sanction the development.

“And, clearly that will not happen,” Cummings said.

He, however, noted that only the government can acquire land.

“So I am asking the question, does the government know anything about it? [Did] the government acquire land close to the school in order to facilitate this process?”

And, speaking separately on WE FM’s Shake Up on Tuesday, Prime Minister Ralph Gonsalves, who also has ministerial responsibility for Grenadines Affairs, said no one had spoken to him “about locating any sewage treatment facility on any part of government land, including the school.

“And unless you ask me, I can’t give permission and that is not something I would give permission for. You would have to explain to me what is happening and then they have to satisfy a number of things: Planning, the people in CWSA would have to be satisfied that whatever anybody is doing and wherever they are putting those things because these are public health matters.”

Gonsalves said that the Ministry of Works would also have to be involved.

“A man may have a plan to do something but whether that plan is going to get approval is a completely different story. But nobody has brought that to my attention in any formal way. So I just make that point. Everybody knows how we function. I don’t function like a mystery. And that is why their propaganda always falls short,” the prime minister said.

And, on Wednesday, Director of Grenadines Affairs, Edwin Snagg dismissed the concerns of the public saying that no sewerage facility linked to the hotel would be built at the school.

“They are dealing with a non-issue here because there is no treatment plant on the school compound; there will be none.  The prime minister, as a matter of fact, spoke about it yesterday, and there are those who are trying to fan the flame of a non-existent fire,” Snagg said.

“Because if the developers have in their minds, or wherever, a plan for the purpose of putting a sewer treatment plant on the Canouan Government School compound, that ain’t going happen.”

Snagg, who has failed in his four attempts to win the Southern Grenadines seat and will make a fifth attempt this year, noted the circumstances under which construction can take place on government lands.

“There is no plan by the government to put any sewer treatment on the Canouan school compound,” Snagg said.

He said he and the prime minister had had a discussion about the public discussion of the matter.

“And the PM said, ‘I am the minister of Grenadines Affairs and I know absolutely nothing about this.’

“Even if the investor or developers want to do something like that, they have to get the permission of the relevant [authorities] and that is not going to happen. You know this administration. Ralph Gonsalves is the Minister of Grenadines Affairs. You know such a thought is just repugnant when you think about it, to put a sewer treatment plant on a school compound. That ain’t go happen.”