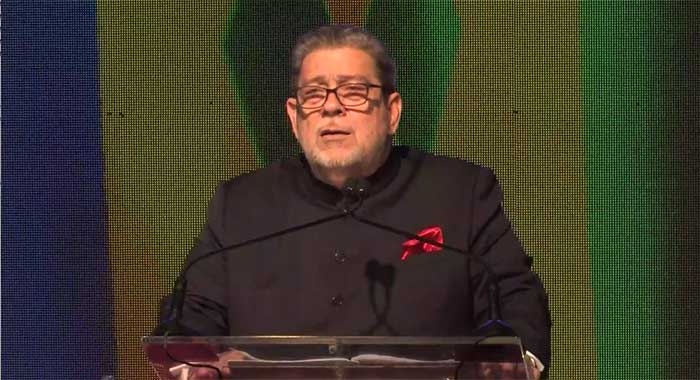 In this screen grab of a Facebook Live video, Prime Minister Ralph Gonsalves delivers the speech in which he announces the election date.

General elections in St. Vincent and the Grenadines will be held on Nov. 5, 2020, about four months ahead of the constitutional deadline and just over a month before the Dec. 9 expiration of the five-year term of the government.

Parliament will be dissolved today, Friday, and Nomination Day will be Oct. 20.

The prime minister said that due to the COVID-19 pandemic, Chief Medical Officer Dr. Simone Keizer-Beache and other health professionals have been discussing Election Day protocols with the Supervisor of Elections, Dora James — who is presiding over her first polls.

“I am sure that the National Monitoring and Consultative Mechanism and the representatives of the respective political parties will be consulted prior to the finalisation of these important protocols,” the prime minister said.

“I expect that these general elections will be held in a peaceful environment,” he further added, stating that the elections chief and the permanent secretary in the Ministry of National Security had assured him that “all practical matters requisite for the holding free and fair elections in accordance with law are in place.

“The Unity Labour Party promises a clean, informative and uplifting campaign. I am now ready to rumble in earnest. This time, they must take their licks like a man,” he said.

Gonsalves was echoing the words of Central Leeward MP, Deputy Prime Minister Sir Louis Straker, to then Opposition Leader, Arnhim Eustace amidst a heated exchange on Dec. 10, 2015 over the results in that district.

The NDP went on to file petitions challenging the results of the 2015 elections in Central Leeward and North Windward, but the court dismissed them, after a full trial, for want of evidence and an appeal of that ruling is still pending.

Gonsalves and the ULP are seeking an unprecedented fifth consecutive term in office, having secured one-seat victories in the 15-member Parliament in 2010 and 2015.

The 74-year-old lawyer is leading his party into the polls again although, in 2015, he had asked the electorate to give him another term in office to transition to a younger leader.

He has since said that the party had maintained that he remain at the helm for this election, in what some political observers said might be an admission that the party believes that neither Minister of Finance, East St. George MP Camillo Gonsalves, the prime minister’s son and heir apparent, or Minister of Agriculture, South Central Windward MP, Saboto Caesar, a one-time front runner for party leader, are ready to lead the party to an electoral victory.

At the same time, Eustace, 76, an economist, who led the NDP to four electoral defeats, stepped away from leadership of the main opposition New Democratic Party in November 2016 and has been succeeded by Godwin Friday, 61, a lawyer, who has been representing the Northern Grenadines since 2001.

The announcement of the polls came hours after the opposition lawmakers paid tribute, in Parliament, to Eustace, a former prime minister and minister of finance, who is retiring from politics after 22 years as MP for East Kingstown.

The opposition’s move in the national assembly suggested that they believed that the announcement of the election was imminent and could have even been made in Parliament.

However, Gonsalves, who returned to the country 14 days ago from the United States, to where he had accompanied his wife, Eloise, for medical attention, was in quarantine until 3 p.m. and did not attend the sitting, which was adjourned — before the expiration of the prime minister’s quarantine – to Nov. 12

Ahead of the announcement of the election date, the prime minister had gone on a “Round De Town Caravan” Thursday afternoon as his party said that people were anxious to see him.

The caravan was led by a truck playing amplified music, from which the prime minister alternated between sitting in a couch and standing and waving at supporters while ringing a bell.

The election date was announced from the undisclosed location from which the ULP broadcasts its virtual public meetings, as both political parties have suspended large-scale in-person public meetings because of the COVID-19 pandemic.

The poll also comes as the nation battles a dengue outbreak which has claimed five lives from among 655 laboratory confirmed cases, in the worst outbreak of the mosquito borne viral illness in more than a decade.(The Ministry of Health, on Thursday, revised downward the number of deaths from six to five.)

Gonsalves wore a black “Ghandi suit” believed to be the one he had said that Indian Prime Minister Narendra Modi had had specially tailored for him during a five-day official visit to that Asian nation in September 2019.

The suit was accentuated by a red pocket square, the colour of Gonsalves’ ULP, while the prime minister spoke in front of a digital display of the national flag.  He wore a red guayabera while delivering his second speech at the event.

And while the prime minister appears to be fascinated by numerology, November has not proven to be a good month, electorally, for his government.

On Nov. 25, 2009, voters in a referendum rejected proposed changes to the nation’s Constitution, in a vote that political observers say was a poll of the ULP’s performance in office. Had that vote been general elections, 13 of the seats would have gone to the NDP, with only two remaining in the ULP’s column.

The prime minister noted that there had been much speculation about the date of this year’s polls.

But, as was the case with the other election dates, Gonsalves said on Thursday that he had gotten the inspiration from scripture.

“I have sought confirmation on … the date for the general elections with the prayerful plea, ‘Speak, Lord, Your servant Ralph is listening’,” the prime minister said in the uncharacteristically short, 15-minute speech in which he announced the election date.

He, however, returned later in the virtual meetings, using some 90 minutes to outline his party’s case for re-election.

Gonsalves said that in several speeches, he had quoted Deuteronomy, the fifth book of the Bible, adding “five in a row,” one of his party’s campaign mantras.

“I quoted Moses, God’s anointed prophet and liberator of the Hebrew people. In chapter 11, verse five. ‘It was not your children who saw what he did for you in the desert until you arrive at this place.’

“St. Vincent and Grenadines had been a metaphoric desert in March 2001. And we have come to a far better place in a far better condition — a transformed condition,” Gonsalves said.

“And as Moses emphasised, it was your own eyes that saw all the great things that the Lord has done. The 11th chapter of Deuteronomy represents for me in our circumstances, the 11th month of the year, November the fifth verse the fifth day. General elections will be held on Thursday November the fifth 2020,” he said in making the announcement.

But political observers were quick to point out that the day after the election is a Friday and is likely to lend itself to the continued punning such as “Every day, any day is Friday”, one of the slogans that the NDP has been using.

But, whichever party wins the election, the new prime minister is likely to be sworn in the following day — a Friday.

In his second speech at the virtual public meeting, Gonsalves noted that Vincentians will vote two days after the United States goes to the polls in presidential elections.

He said the ULP had an interest in a high turnout saying that once party supporters and the youth turn out to the polls, the ULP is bound to win the election.

Gonsalves said that U.S. network television is likely to urge high voter turnout in the United States, “and Vincentians will be saying, we have to turn out too”.

The prime minister, however, did not say what the impact that results of the US polls is likely to have on voters in SVG.

In the speech in which he announced the election date, Gonsalves said that in his almost 19 years as prime minister he has served “to the best of my ability, selflessly and honestly, ever on one single occasion, using, misusing or abusing public resources for private gain.

“I have served you with immense caring, dedication, commitment, hard and smart work and, above all, with a profound love for my country, our people and our Caribbean civilization.

“I have been with you joyously at the mountain tops of achievements and together we have accomplished mighty things for our nation. And together again, we will talk about more progress and prosperity for St. Vincent and the Grenadines.

“I’ve also embraced you in heart and spirit, on the occasions in which we have found ourselves in the valley of hardship and misfortune, of loss and damage of pain and suffering. Whether celebrating in happiness or consoling in heartache or sadness, I have been in communion with you. Most of all, whether we are up on the mountaintop, or down in the valley, you and I, all the people of St. Vincent and the Grenadines, despite our weaknesses and sinfulness, we go to our God in adoration, contrition, thanksgiving and supplication, because we know that He is our God on the highest mountain and ours too in the deepest Valley.”

He said that from “this wellspring of humility, justice, goodness, and mercy, we have bountiful hope.

“As you know quite well. I have never been a pessimist. I have never accepted that we can’t do this or that which is uplifting. I am a man of creative thought, purposeful action, and hopefulness. I am not a man of lamentations. I’m always optimistic about life and living. That is the essence of a redeeming grace — always hopeful. ‘Morning by morning, new mercies we see all that we need, Your hand, Thy hand has provided. Great is your faithfulness.’

“We must continue to exude hope, not helplessness. A helplessness we must not have because that embraces a debilitating hopelessness.”