‘It is time for a change’ — Opposition Leader 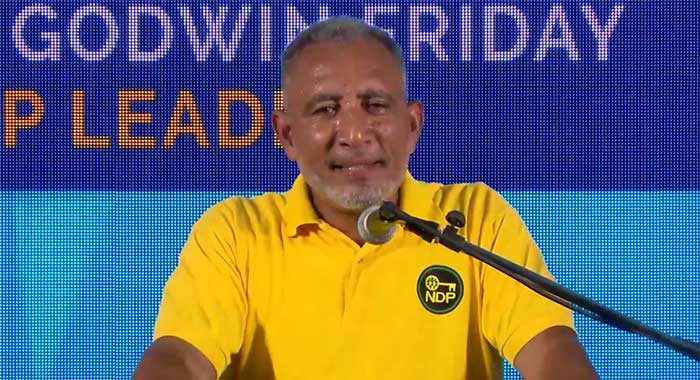 In this screen grab of a Facebook Live video, Opposition Leader Godwin Friday addresses a New Democratic Party virtual public shortly after the announcement of the election date Thursday night.

Leader of the Opposition Godwin Friday, Thursday night, celebrated the announcement of Nov. 5 as the date for general elections, saying this is what his New Democratic Party had waited five years for.

“It is time for a change, my people. It is time to give me and the New Democratic Party and this outstanding, unprecedented team that we have put together to represent our people and to form government and deliver our people,” Friday told an NDP virtual public meeting.

“It is time for a change and time for us to plant the seed for a better future for you and your family. Our country urgently needs the biggest job creation programme ever in the history of our country to deal with the current unemployment crisis that we have in this country — over 36% of our people are without jobs. For young people, it is over 50%,” Friday said in a speech delivered shortly after Prime Minister Ralph Gonsalves announced the date of the election.

“As we have said over several months of this campaign, our priority is to create jobs for people. We want, imagine this; we want to build a St Vincent and the Grenadines in which everyone who wants to work has an opportunity to do so.

“Those who want to work can work here in our country — creating better conditions which mean that our young people will want to stay and build futures here, raise their families, use their talents, their entrepreneurship, their drive, to build our country,” Friday said.

“On your marks! Get set! Leh we we go!” a jubilant Friday told the virtual public meeting broadcast from the NDP headquarters in Kingstown at the same time that Gonsalves announced the election date.

He said that people had been asking him daily about when the prime minister would announce the polls.

“And we tell yo’ that if ralph ain’t call the election, the election ah call him,” said Friday, 61, who is making his first bid to become prime minister.

“And today, when they drive around Kingstown and they see the reception, they ain’t look good,” he said, referring to the “Round De Town Caravan” organized by the ruling Unity Labour Party to mark the prime minister’s completion of COVID-19 quarantine after returning from the United States two weeks ago.

“They say, ‘Boy, better know that later’,” the opposition leader said, adding, “But this is the moment we have been calling for.

The opposition leader told voters that their ballot matters “because it will decide what sort of country we will be and what kind of future you and your family will have”.

“Don’t kid yourself. The choice in this election is stark and it is very clear. This is a once-in-a-generation opportunity for change and for a better tomorrow for us here in St. Vincent and Grenadines. And the choice, very simply, is this: more broken promises more complacency, more self-interest and nepotism, more victimisation under the ULP, or a new beginning for the people of St. Vincent and the Grenadines, a new beginning with a plan going forward for jobs and growth and a better future under the New Democratic Party.

The opposition leader said that the problem is that there is no plan from the ULP government to lay the foundations for future success in SVG.

“There is an abandonment of any serious planning going forward to develop our country. There is a dereliction of duty and a confirmation that they, that is, the ULP, they take the Vincentian people for granted.

He said that 20 years of ULP governance has resulted in a lack of economic opportunities for many Vincentians.

“Our young people, in particular, they leave our shores, they go abroad, they tell you this, [they go] further afield to Canada and the United States, but also here in the other OECS countries that are doing much better than we are in St. Vincent and the Grenadines. We all know people who have done this.”

Friday said when while the nation’s youth go overseas to improve themselves, it is a terrible loss for SVG “because when they leave our shores, they leave us here ill-equipped to grow our economy and to prepare for a better future.

“That is why we are in the mess that we are in now in this country. … Our cost of living has been rising. Everybody knows this. It’s becoming increasingly difficult to make ends meet.

“Our people suffer because they can’t get jobs, especially our young people. They need to earn a better living to provide for themselves and for their families. There is serious concern all over this land as to what the future holds for us here in this country, what are the prospects for people.”

Friday said that the ULP, which came to office in March 2001, has failed the people.

“… now that the bell has rung, they will come with promises and gifts. But that is only because they want to get your vote. In the long years afterwards, as you have seen, they do not deliver for our people.”

The opposition leader said that the ULP’s failure to keep its promises is seen in the state of public infrastructure, the rundown condition of Milton Cato Memorial Hospital and clinics all over the country.

“You can see it in the broken promises where they said that they would build a national stadium and all they have done now is present us with a track that is not even up to Olympic standards after 20 years in government.

“You can see it in a failure to secure major developments on the mainland St. Vincent, despite the big promises and the flashy drawings. After 19 years, my dear people, there are still no new international hotels operating and bringing tourists and jobs to our people.”

He noted that earlier that day, in Parliament, he had asked Minister of Tourism, Cecil “Ces” McKie about the status of Black Sand Resort at Mt Wynne-Peters Hope, which is far from completion, past the announced date.

“Poor fella. He didn’t know what was happening. That is how we have been let down by this ULP government. You can see it in the failure to deliver jobs for young people,” Friday said.

“So, my dear people, there is a clear choice in this election, you can vote for more of the same with the ULP or you can vote for a better future for your families with the NDP, because the NDP presents the real alternative to the people of this country,” Friday said.

He said an NDP administration would “set ambitious goals for people and for country. Goals that will deliver the investments and resources and the production that we need to transform this country.”

He said that a strong economy would encourage local investment.

“It will also attract more foreign investors to come and invest in St. Vincent and the Grenadines. In doing so, they create jobs. They bring better wages for all Vincentians. And without a strong economy, we see what we get now in this country.”

The opposition leader said that under the ULP, SVG cannot afford to fix basic infrastructure such as road and jetties.

“Without a strong economy, we can’t improve these things. That is why my government, we will focus on building the economy, strengthening the economy of St. Vincent and the Grenadines, using the talents and resources of our local private sector and foreign direct investors who wish to come here.”

Friday said that a vote for the NDP is a vote for jobs and economic growth.

“Do you know under this ULP government last year in 2019, that is, before COVID-19 struck, the economy of this country grew by 0.4%? That is no growth at all. We didn’t grow.”

He said that at the same time, OECS economy grew at an average of 2.7%.

“We got 0.4. That is why we can’t find jobs. That is why this country is so hard for so many people,” he said.

Friday said the NDP has a clear goal to protect, support and create jobs.

“We are not going to be competing against business. We need them to succeed to make our country succeed. We will make sure jobs are created in every part of this country, not just in a few pockets, so that your growth and prosperity will be spread all over St. Vincent and Grenadines because we are one nation. … And my personal priority, as you know is to give young people a better start, to give every Vincentian the opportunity for a fresh start. And I can assure you that where there are problems, we will confront them and we will overcome them.”

6 replies on “‘It is time for a change’ — Opposition Leader”