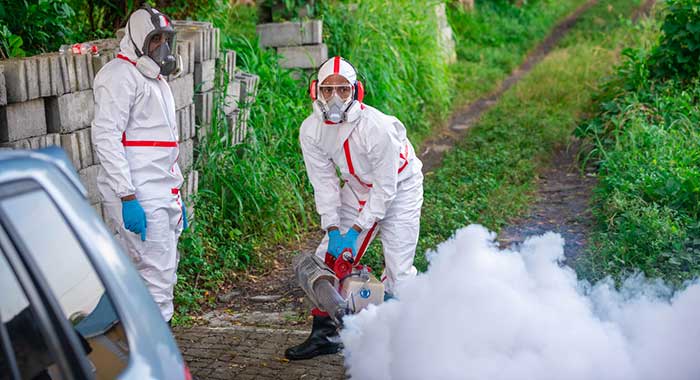 Minister of Health, Senator Luke Browne has been accused of focusing on his election campaign rather than his ministerial duties. The minister posted to his “politician” Facebook on Sept. 25, 2020, this and other photos of him fogging for mosquitos, days after failing to attend a press conference to address the dengue outbreak.

Amidst suggestions that he might have been so busy campaigning for the upcoming general elections that his ministry dropped the ball on the dengue outbreak, Minister of Health Senator Luke Browne says he knows that his ministerial performance can affect his election chances.

The minister was asked at a press conference last Friday to respond to the view that he was so focused on winning election that he lost focus on his work as a minister.

“Well, I respond by the facts. First of all, me going to Parliament as an elected member on the basis of results from upcoming elections depends, to some extent, on how well I do as Minister of Health. So the two things are not divorced at all.

The minister was speaking just over a week after failing to attend a Sept. 22 press briefing by his ministry to update the nation on the dengue fever outbreak, which had at that time claimed two lives among the 300 persons who had then been confirmed as having the disease.

The minister later said that while his ministry was briefing the nation on the mosquito-borne viral illness, he was at a primary school in his constituency talking to the students about the illness.

Between that Sept. 22 press conference and the one the minister held last Friday, an additional three persons have died and the number of confirmed cases has soared past 500.

The Minister said on Thursday, yesterday, that one of the six persons who it had initially said had died of dengue, had died of other complication, but also had dengue. The number of confirmed cases as of this past Tuesday, Oct. 6, was 655.

At Friday’s press conference, the minister announced that the government has allocated EC$1.6 million to respond to the dengue outbreak.

‘preoccupied with a photo-shoot’

And, last week Wednesday, Sept. 30, opposition spokesperson on Health, Daniel Cummings, said the minister did not attend the Sept. 22 press conference because he was trying to avoid the news media.

“When you have a minister who is more preoccupied with a photo-shoot for political purposes than to address an important press conference on the outbreak of dengue, that tells you where we are in St. Vincent and the Grenadines,” Cummings said.

“Where else in the world will that be permissible? Where else?

The ministry of health, led by Senator Luke Browne, had failed the people of this country miserably and they must take responsibly for the outbreak of dengue, resulting in at least four deaths.”

Cummings said that a person hosting a press conference could expect “searching questions”.

“But this minister cannot expose himself to an environment where he would be questioned on such a nightmare,” said Cummings, who is a two-term MP for West Kingstown.

Cummings noted that rather than address the nation at the press conference, Browne went on his politician page on Facebook and posted a video address the following day.

“Is that how a minister of health is supposed to report to the people of a country?” the opposition lawmaker said.

He accused Browne of being insincere, adding that fogging can help to control mosquitos but is not a panacea.

After the video post on his Facebook page, the health minister also posted a number of photos of him participating in an apparent mosquito fogging exercise.

But Cummings said that the Caribbean Public Health Agency had warned in January of 2019 of the possibility of a dengue outbreak across the region.

Cummings said that fogging has to be done in such a way that it kills the adult mosquitoes and, later, those that were developing.

“… so you want to make sure that you not only kill the adults but any of the eggs that hatch, you kill those, so you fog at least two weeks, one after the other,” he said, adding that fogging  must be done “in the nooks and crannies where people live, rather than just driving along the main roads”.

The West Kingstown MP said that the persons in environmental health are well trained and know what they should do. But they don’t have the resources necessary to carry out the work.

“And that is why all of us are suffering,” Cummings said.

At Friday’s press conference, the health minister was asked if he was pleased with his ministry’s response to the outbreak of dengue.

“I want to simply say, I’m never satisfied. I’m always striving for a better response to do better, and to do more in all situations. And that is also true in response to this outbreak, but what I could say is that we have been putting our best foot forward, and we would continue to do that going into the upcoming period. “

When Browne was asked what he, therefore, thought could have been done differently or better, the health minister said:

“Well, that is something that we might have to have a discussion and a review on as we review the ongoing outbreak. But what I what I could see is that I believe that everybody involved on the basis of all the information available has been doing their best to protect the health of the nation.”

Asked if no review had been done so far, Browne said: