Plaudits for Eustace on his last day as MP 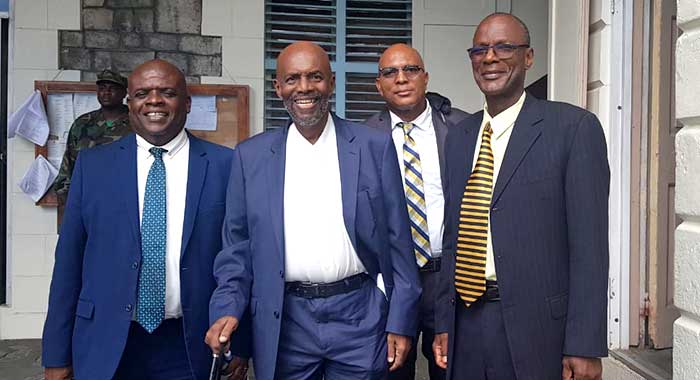 Opposition lawmakers, on Thursday, paid tribute to five-term MP for East Kingstown, Arnhim Eustace, on what turned out to be his last sitting as a member of the national assembly.

“… this may well be the last Parliament before elections. I don’t want to take any chances. So I wish to congratulate him on the sterling service that He has given to this parliament, to this country,” Opposition Leader Godwin Friday said in leading out the tributes.

Eustace’s 22-year tenure as a lawmaker would end the following day with the dissolution of Parliament, Prime Minister Ralph Gonsalves having announced Thursday night that general elections will be held on the Nov. 5.

“He served in government as Minister of Finance, he served as prime minister and before that, he was an exceptional public servant. His life has been one of public service, as the youngest permanent secretary in this country, serving governments to the best of his ability for the benefit of all Vincentians with professionalism, competence, dedication to service. These are hallmarks of the Honourable Arnhim Eustace.”

The opposition leader said that Eustace’s tenure is an example for “young people who feel that public service may not be the thing for them, but to understand the importance of having people of ability, integrity and commitment to give all of that in the service of our country”.

Friday said he had the privilege and honour to serve in Parliament with Eustace since 2001.

“And I have nothing, but admiration for the level of commitment and integrity and competence that he has demonstrated over those many years.

“And I’m not too shy to say, Mr. Speaker, that I have learned a lot from him and in many of the goals and the approaches that I have adopted over the years have been influenced by the way he has conducted himself. I’m very grateful for that,” Friday said.

And, in his comments, West Kingstown MP, Daniel Cummings congratulated the Eustace for his “tremendous service to St. Vincent and the Grenadines…

“Mr. Speaker, the phrase ‘a kinder and gentler society’ can be used to describe the character of Mr. Eustace. Perhaps his integrity, his commitment to truth and justice will stand out over the trying periods of time to come as a unique and admirable trait.”

Cummings, who is chair of the NDP, said that when, in 2010, the National Commercial Bank (NCB) was in dire straits, Eustace, then, as opposition leader, had this information.

“… any other political animal would have used that to much political effect. Ulric Arnhim Eustace decided there and then very steadfastly and unequivocally that to release that information may bring political gains but it will do irreparable damage to this country.

“He explained it could have led to a run on the bank, which could lead to its collapse — not just for the bank and St. Vincent but could also impact the OECS banking system,” Cummings said.

Cummings reiterated that politics is something that he still does not like.

“But there is one man being in politics that was my reason for deciding to join the New Democratic Party. That man is Mr. Eustace because I knew of his integrity. I know of his belief in truth, and his earnest desire for what is good for St. Vincent and the Grenadines, even above what is good for a political party.”

Meanwhile, Central Kingstown MP, St. Clair Leacock, who as one of Eustace’s vice presidents of the NDP, hailed Eustace’s success in rebuilding the NDP after the March 2001 routing at the polls.

“… very early Mr. Speaker in service in this Parliament, I recall having to join him on a trip to Barbados to ventilate the extent and the degree of victimisation that the people of St. Vincent and the Grenadines were experiencing.

“It’s almost as if at that time, the New Democratic Party had leprosy. Nobody wanted to touch us, come near us. We couldn’t even get media attention Mr. Speaker and we had to go that far to have our story told.”

“It hasn’t been easy, Mr. Speaker, for him. In my limited political experience, there will be few political leaders that would be able to argue that they’ve been more robust and demonstrative in opposition politics.

“Mr. Eustace has been, beyond a shadow of a doubt, bold and firm in principle in his quest for constitutional rule and democratic practices and traditions.”

Also paying tribute to Eustace was MP for North Leeward, Roland “Patel” Matthews, who spoke about his work as Eustace’s research officer.

“I have to say that I learned a lot so that when I became an elected member of parliament, dealing with the budget was an easy matter.”

MP for the southern Grenadines, Terrance Ollivierre, spoke of how Eustace, then as prime minister, had contacted him while he was as university student, telling him that his constituents wanted him to be their candidate.

“… I wish to thank you for all the advice and all the help that you have given over the years,” said Ollivierre, who is seeking election to a fifth term as MP for the Southern Grenadines.

“Mr. Eustace is as a man who you can talk to. I found talking to him to be quite an easy and simple thing. So much so not only that, my last daughter has had the pleasure to be nurtured by Mr. Eustace. As a matter of fact, her first years at secondary school on mainland St. Vincent were under the care of the Eustace and I would also like to thank them for that.”

Nigel Stephenson, MP for South Leeward, said that Eustace has a reputation of being a hardliner.

“But having sat with him and listened to him as he expounded on the economic affairs of the day, I recognise that this person who was described as a hardliner had a very soft spot…

Senator Kay Bacchus-Baptiste spoke of the legal matters in which she represented Eustace against the state, including the challenge to the boundary commission in 2015.

“And that led to a real historic decision, which is now precedent in this court because we’re not for that decision. We might have seen a change in boundaries when that Boundary Commission met recently.

“There’s the issue again of using the census to determine the constituencies, which is illegal. And that came up recently again, but we had the decision of Justice Thom, which guided what should happen in cutting up constituency boundaries.”

And Senator Israel Bruce reminisced on the time when he worked with Eustace to rebuild the NDP’s youth arm.

He spoke about Eustace’s principles, recounting how he had dealt with a theft incident at a fundraiser.

“… the coordinator of the event reported that there were some missing items from the bar. And he went to Eustace’s office to report because he had known who the culprit was. And Eustace, as straight as an arrow, looked him in the face and asked him, ‘Why you’re coming to me? If somebody has stolen, call the police.’

“And to me, that was a defining moment, because it said, very loudly, what we could have expected from Arnhim Eustace, the honourable gentleman who provided leadership in this Parliament as leader of the opposition,” Bruce said.

In East Kingstown, the NDP has replaced Eustace with Dwight Fitzgerald Bramble, a first-time candidate, who will face off with Luke Browne of the ruling Unity labour Party, who Eustace defeated in 2010 and 2015.