Straker suggests jet nabbed with guns in US had visited SVG 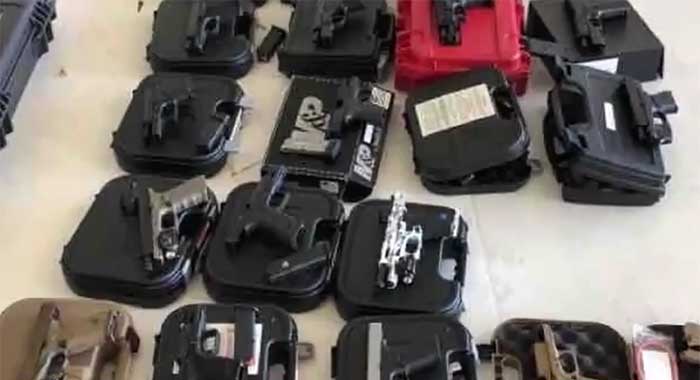 Some of the firearms found on the aircraft in the United States in August.

St. Vincent and the Grenadines (SVG) police chief, Colin John says the jet intercepted in Miami in August, “fully loaded, from the cockpit back to the lavatory, with cases and boxes of weapons, ammunition and household goods” was not bound for SVG, notwithstanding the declaration on the flight plan filed with U.S authorities.

The jet loaded with guns, ammunition, and cash set to depart the United States in August with St. Vincent and the Grenadines (SVG) as its destination might have come to the SVG before.

That is the impression that followers of Parliament might have been left with last Thursday, as Deputy Prime Minister, Sir Louis Straker responded to a question by Opposition Leader, Godwin Friday.

Friday’s question was answered by the deputy prime minister as Prime Minister Ralph Gonsalves did not attend the sitting of the national assembly as he was in quarantine after a trip to the United States.

The opposition leader, in his question, noted that a jet was intercepted in Miami on Aug. 15, with guns, ammunition and money and a flight plan which stated St. Vincent and the Grenadines as its destination, which the Commissioner of Police in Kingstown later said was a decoy.

Friday asked the prime minister to say whether, since the commissioner’s statement, any further information was obtained about the aircraft and its intended destination and purpose and further whether the aircraft has ever been to SVG.

Sir Louis responded on behalf of the prime minister said:

He noted that the U.S. authorities had also publicly alleged that the aircraft’s true destination was Venezuela.

There was silence on the other side and Friday said, “You wouldn’t know? Well, maybe the honourable prime minister could respond to that.”

Under the rules of the house, Friday would not have asked Straker a supplementary question as the deputy prime minister was answering on behalf of someone else.