‘We are fighting for the soul of this country’ – Sir James 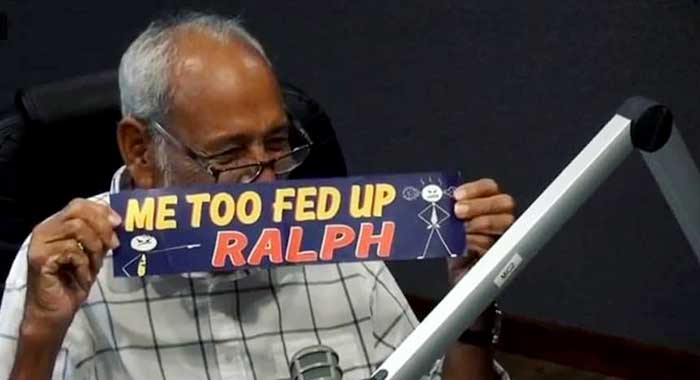 Former Prime Minister Sir James Mitchell says that the 2020 general elections are a fight for the soul of St. Vincent and the Grenadines.

“First of all, I think this is one of the most important elections in our history,” he said on Boom FM on Tuesday.

“And I have been through several and the tasks are enormous and, therefore, the choices are most important now,” said Sir James, who was prime minister from 1984 to October 2000.

Sir James said that the big issues in the Nov. 5 vote are healthcare, poverty, and the climate of fear.

“We cannot say with all the talk about independence that we have reached the zenith of freedom in this country. You cannot criticise the government, you cannot speak your mind and this is what is frightening a lot of people in the voting process.”

He said persons are saying, “I ain’t bothering with politics, I not into that because I don’t know what is going to happen to me.”

“And it is affecting even mature people,” the retired politician said, adding that this is worrying and this is why he considers the election as one of the most important in a generation.

“And people have to make a choice,” Sir James said.

Sir James said that the choice is “between more broken promises, complacency, and the self-interest of the governing party.”

He said that the main opposition New Democratic Party (NDP), which he founded 45 years ago, is an alternative.

“We have a government that has been in for 19 years and the quality of life in this country has not improved and the fundamental thing is the people’s concept of themselves.

“We are not a free society and democracy is supposed to produce freedom, liberty; you should be able to feel free and you have a situation where you are not going to get business. The playing field is not level.

“Take for example, the government offered and built a number of schools. And all of them awarded to a Chinese company and one of them given to a local contractor, Marine and General, taken away and given to somebody else after they won the contract.

“I mean, what kind of country is this? How’re you going to have fairness? And we have to break that cycle. We have to get into a new direction. We are fighting for the soul of this country.”

Sir James said that under the NDP administration there was “a clear and unambiguous policy.

“We aim to create a property-owning democracy. We aimed to ensure that people have money in their pocket so that they can talk freely and we were developing a middle class.

He said that fear has two components: fear for one’s well-being and fear of one’s life and society.

“When Prime Minister Gonsalves took over, he said one thing that I admired him for and he was absolutely right in it. He said he had been a lawyer dealing with criminals and he knows the mind of criminals and as a result he would be able to deal with crime. It didn’t seem as though his practice led to any results. “

In the radio appearance, a video of which was broadcast live on Facebook, Sir James held up a bumper sticker that read,

Sir James said, and you see the man there with his yellow tie on?

“Blowing fumes out of his ears, and Ralph is in red,” the host commented.

Sir James continued, “And that is not all. After people get tired of that one, we have another one,” he said, holding up a bumper sticker that read, “ME TOO FED UP AH RALPH”.