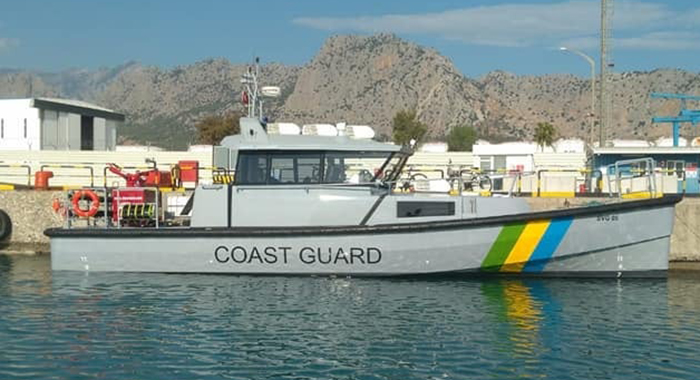 The Government of St. Vincent and the Grenadines, on Thursday, officially received a EC$4.3 million Coast Guard medevac vessel to be used to transport ill persons throughout the archipelago.

However, the commissioning of the 52-foot-long, 16-foot-beam boat — “SVG 05 –Balliceaux” — will be delayed until the manufacturers make some adjustments and local personnel are trained in operating the vessel and dealing with the patients it will transport.

Prime Minister and Minister of National Security Ralph Gonsalves told a ceremony at the Calliaqua Coast Guard Base that the vessel can travel at a top speed of 33 nautical miles.

This means that it would take just over one hour to travel the 41 nautical miles between Kingstown and Union Island, located in the southern Grenadines.

Gonsalves said that the vessel could travel at its top speed for 210 nautical miles.

“This, at top speed, it does 33 miles per hour. You can do the math. That means when an hour pass, they done 33 miles so by the time you skip and you jump and you hop, you’re inside of St. Vincent.”

He said, therefore, that when someone is to be evacuated, the relevant persons have to make sure they move swiftly so that there is quick shore-to-ship and ship-to-shore transfer of patients.

He said that when the ship arrives at a port, the ambulance must be there.

Gonsalves said this is why the vessel was purchased, adding that the existing vessels are not suitable for transporting ill persons and the largest Coast Guard vessel is too expensive for such operations and is slower.

“That’s not the purpose for that,” he said, adding that is why the particular corrections to be made to the Balliceaux are important.

The vessel is outfitted with an automatic defibrillator — a device that restores a normal heartbeat by sending an electric pulse or shock to the heart – as well as a medical kit, first aid kits, and two medical beds to transport patients from shore to ship and vice versa, the prime minister said adding that Damen has to “do the correction with the bed issue”.

Gonsalves said that the ship did not come outfitted with oxygen tanks and the government will install them.

“We already pointed out to them that there are couple of things they have to come and change because though Damen ship yard is in Holland, they had it built in Turkey,” he said, referring to the company that manufactured the vessel.

“So one or two things slipped them.  So we have asked them to come and correct a couple of things before we commission it and we already sent them an email and they sent back say they’re coming and they already organise how they will quarantine until they will come and sort out those teething problems. But they also have to come and do the training,” Gonsalves said.

He noted that his government purchased the ship using local funds.

“This money is not money we get from anywhere, we took our own money and buy this and, by the way, we buying it in the year of COVID,” he said noting that his government does not operate a citizenship by investment (CBI) programme.

Gonsalves said that countries with CBI programme are asking SVG for assistance with patrolling, using its 140-foot off-sea patrol vessel, Capt. Hugh Mulzac, which was commissioned in January 2019, ending a 10-year period in which SVG had no Coast Guard vessel capable of reaching the furthest part of its maritime space.

“And we will help in the context of RSS. We ain’t selfish,” he said and restarted his opposition to CBI programmes saying that passport and citizenship are sacraments of nationhood and not for sale.

He said that the crew would have to know both how to operate the vessel and how to handle and treat patients.

“They tell me that because of the long and slender sea axe hull, it offers exceptionally low resistance, delivering excellent fuel efficiency at all speeds,” the prime minister said, adding that the vessel would still burn a lot of fuel and asked that the permanent secretary not “chinks” (be stingy) in giving the money for fuel.

Gonsalves said that something which impressed him about the vessel from the beginning is that its hull and superstructure are made from fibre reinforced polymer.

He said the manufacturers said this is very strong material and provides impressive sea keeping behaviour in waves at high speed.

“And for maintenance purposes, they also told me that it is easy to maintain and not subject to corrosions.”

He said that different names were suggested but the government settled on “Balliceaux”, the name of the tiny island to which native Vincentians were taken after their chief Joseph Chatoyer, the country’s national hero, was killed in the late 18th century in a battle with the British.

“Balliceaux” replaces the Coast Guard Vessel, “George McIntosh”, which was named for an outstanding political leader in SVG in the first fifty years of the 20th century.