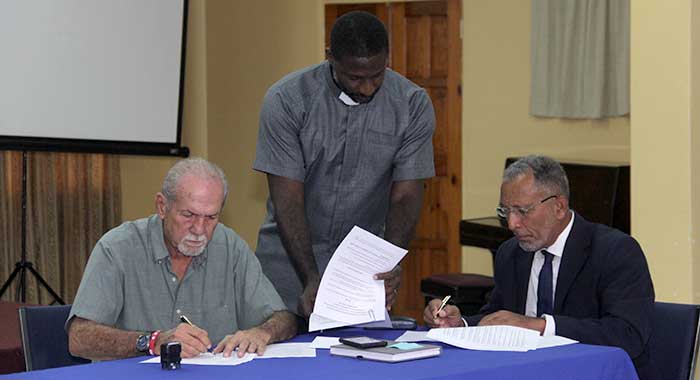 The two major political parties in St. Vincent and the Grenadines, on Friday, signed the National Monitoring and Consultative Mechanism (NMCM) “Code of Ethical Political Conduct” to govern the campaign for the Nov. 5 general elections.

Speaking at the signing, Francis called on the signatories to respect this code of conduct.

“We are traversing unusual ground in this election, in that one political party is going for a fifth term in office and the other is competing to stop the fifth term. Both arguments will be presented to the people of St. Vincent and the Grenadines in accordance with this code of conduct,” Francis said.

“And the qualified voters who are registered will make their decision at the poll. Neither of us has anything to do or should not in any way, try to influence them on election day. We have our 27 days of actual campaign, we’ve had four days of campaign and I want us to do it in a peaceful and loving manner,” Francis further stated, noting that the code of conduct covers many things.

‘What we do must elevate us’

Meanwhile, Friday said that the signing was not just ceremonial.

“It’s intended to be substantive and a commitment on behalf of the political parties to adhere to the principles set out in this code of conduct drafted by the National Monitoring and Consultative Mechanism.”

He thanked those who participated in the process in ensuring that the code of conduct is kept up to date.

“It is intended to make our democracy one that lives up to the ideals and principles of a democracy –those that are outlined in our legislation, principally the Representation of the People Act, to enhance our process of selecting government,” the opposition leader said.

He said he agreed that the Nov. 5 vote was an important one, and not just because the NDP is seeking to stop the ULP from securing a fifth term in office.

“It is that we want to persuade the people of this country that we have a better plan and a vision for the future of our country and hope that on election day that we would have persuaded them of that, and that they will go forward and support the NDP in this upcoming election,” said Friday, who is making his first bid to become prime minister.

“… I pledge on behalf of the New Democratic Party, having signed this document to do all in my power to ensure that we live and conduct this campaign in accordance with the principles and the letter set out herein, and moreover, in accordance with the laws governing our election process, and we trust that the outcome would be truly an elevation, a celebration and expression of our democracy, and that the process will become strengthened.

“… the outcome of contesting elections can’t be that you form government or you win at any cost. Because inheriting a pile of ashes is not what we intend to do. That is not why we become engaged in this very important public service and seek to earn the trust of our people. What we do must elevate us. And that’s what I intend to do as leader of the New Democratic Party,” the opposition leader said.

‘a significant act of responsibility, integrity, and credibility’

Meanwhile, Davis said that the signing of the code “is a significant act of responsibility, integrity, and credibility”.

He said that in an environment of competitive politics, those contesting will be seeking an advantage one over the other, there is always the need for rules of engagement.

“These are not imposed rules. As most of you may know, both sides have had occasion to review the code and make their contribution with final presentation,” Davis said.

The Christian cleric said that before finalising the code, actually, the leadership of the Christian Council, in preparation for the NMCM meeting, met with the prime minister and leader of the opposition and their respective teams.

The religious body also held talks with the elections chief, police chief, and the management of the state-owned radio station, National Broadcasting Corporation.

“… because we felt and realized they were all important stakeholders in this process,” Davis said.

Objectives of the code

The code aims to foster democracy through peaceful, free and fair elections conducted at regular intervals in which voters are allowed to cast their ballots freely, without interference, fear, intimidation or bribery

It promotes respect for human rights, the pursuit of civil and political liberties, the tolerance of divergent opinions, and full and active participation of all in the political process

It further encourages participation in the electoral process by the people and to uphold their rights to make political choices.

The code also seeks to promote an election process free from intimidation and violence.