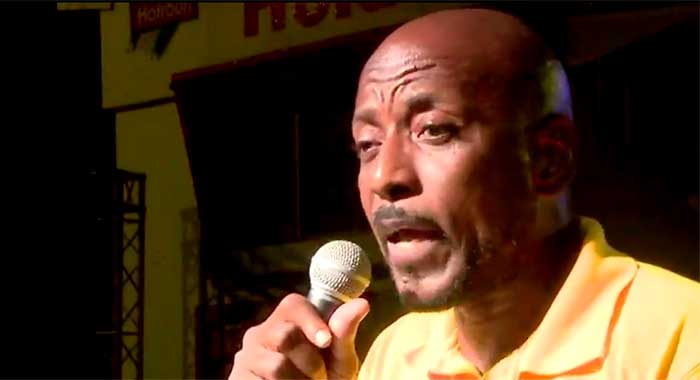 New Democratic Party (NDP) candidate for East Kingstown, Dwight Fitzgerald Bramble, is not bothered by naysayers who have cried down plans for the construction of an entertainment and water park at Sion Hill Bay.

The political newcomer made his position clear when he addressed party supporters at Sion Hill, Friday night, and said if elected, he plans to move full steam ahead with his “2020 East Kingstown Constituency Development Plan”.

“They make all kind of jokes when I said we going to bring a water park to Sion Hill Bay. But what they fail to tell you is that the Sandals Resort, they asked for more land so that they can include a water park in that hotel.

“So because a bunch of foreigners say they going to build a water park it is all well and good but when humble Fitz Bramble come, they want to say all kind of things. But after Nov. 5 they could talk ‘til the cows come home.”

In July, the government announced that the regional hotel chain, Sandal, will be expanding to St. Vincent and setting up shop at the former Buccament Bay Resort, which has been closed since December 2016.

Bramble said he is not concerned with criticism of his water park idea, adding that he believes such a venture will provide employment opportunities for the people of St. Vincent as well as revive a dying tourism sector.

In reaffirming the development plan to party supporters, Bramble left out initial details about having dolphins included as a feature of the park. This was an aspect for which he had received much flak from some members of the public, with Finance Minister Camillo Gonsalves saying Bramble was proposing a “dolphin prison”.

Bramble said: “The water park is coming! They can say what they like but it coming because it will create jobs during the construction phase and during the operation and maintenance phase. We have a tourist industry that is dead.

“When a cruise ship comes into the [Kingstown] Harbour just imagine this water park… you fill a van full of tourists and they spending money in the restaurants, in the bar. That is revenue that is being generated.”

In his address, Bramble urged party supporters to reject the notion of “five-in-a-row” on Nov. 5 and instead throw their support behind the NDP, saying the party has laid out it plans to shake up the country’s economy.

He said the chain of broken promises by the Unity Labour Party (ULP) has crippled the development of the country.

“We are so debt-burdened that we cannot afford to spend money on meaningful activities. Can you imagine almost 50,000 people in St. Vincent and the Grenadines living at or below the poverty line? All that means is that almost half our population is living on $14 a day or less. This is matter of life and death. We don’t have a middle class in this country; all we have is rich and poor.”

Bramble said that when the ULP came to office in 2001, the national debt was EC$600 million.

Correction: An earlier version of this article quoted Bramble as saying the national debt was EC$1.6 billion. He actually said it was EC$1.7 million.

5 replies on “Bramble not swayed by water park criticism”