PM to visit Sharpes in defiance of Leacock 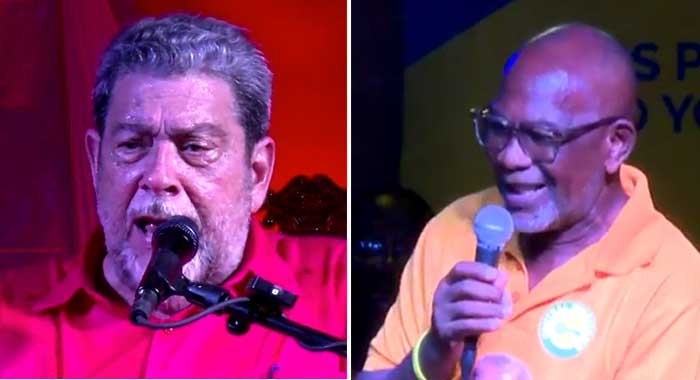 One night after incumbent MP for Central Kingstown, St. Clair Leacock said he was joking when he said Prime Minister Ralph Gonsalves could not visit Redemption Sharpes, Gonsalves announced that he will visit the community on Sunday.

The prime minister said that the ULP constituency council in Central Kingstown will be having a whistle stop on Sunday.

“And at some time during the course of that event, I will be going into Central Kingstown, which is part of the territory of St. Vincent and the Grenadines, of which I am prime minister,” Gonsalves said.

Speaking at the New Democratic Party (NDP) rally in Sion Hill on Friday, Leacock said he had learnt from the media that Gonsalves had complained to the Christian Council about the matter.

“This morning, when I opened the newspaper, Ralph’s paper, the Searchlight, and I saw in it that Ralph report me to the Christian council, I start to laugh,” said Leacock, who is seeking a third term as MP for Central Kingstown.

“I say, ‘What’s going on here? The man say he is an ancient warrior, he is a stallion, he is a thoroughbred, he hard fu dead and I just mek a joke and say don’t come Sharpes and he start to cry,” he said, referring to the prime minister.’

He said that persons who want to hear the rest of the story have to attend his party’s political event in the Central Kingstown community next week.

And, speaking on Saturday, in Georgetown, at the launch of his campaign office, Gonsalves said that at the beginning of the campaign he had told the commissioner of police “that I have picked up signs of desperation from the New Democratic Party and I have heard them use language of a particular kind where it is easy for that language to be interpreted or misinterpreted by some of their more excitable followers”.

Gonsalves said that as Minister of National Security he had suggested to the commissioner that the police chief pay special attention to the matter “in whatever way he considered as a professional that he should deal with it.

“He could reject my advice, he can do what he want,” the prime minister said.

Gonsalves said that Leacock has been saying “that he’s the major — well he was the major in a Cadet Corps … and he owns central Kingstown and if I come there I would see what would happen to me or words to that effect.

“Well, I don’t take that as a threat,” Gonsalves said. “I take it as a statement made by a man who is under pressure. So I didn’t make a complaint to the Christian Council.”

Gonsalves said he and Leacock are both Catholics so he spoke to Monsignor “Father Mike” Stewart of the Catholic Church.

“And St. Clair, be careful that not one single hair on my body is touched by any ignorant person who wants to follow this misguided statement which you have made.”

But Gonsalves said that Leacock could visit the constituency, adding that he could arrange for a woman to cook a meal of the opposition politician’s choice and have a shop operator put Leacock’s drinks on the PM’s tab.

“I will welcome you with love, my brother, but we ain’t voting NDP in North Central or anywhere in St. Vincent and the Grenadines,” said Gonsalves, whose ULP is seeking a fifth term in office in the Nov. 5 vote.

Gonsalves said that Leacock has said it is statistically impossible for him to lose at the next general elections.

“But what I do know is this. As a statistical fact, in this consistency, I won the last time by 82% of the vote. Leacock won his own by 55%. Leacock didn’t win his seat by a higher percentage than Sabby win his, or Gustaus win his,  or Camillo win his, or Jimmy win his,” Gonsalves said, referring to ULP politicians who were successful in the 2015 vote.

“But he say he is a gorgon up there. He say statistically he cyah lose.”

The prime minister invited Leacock to look at “a little history”.

“… somebody who was far better than Leacock as a representative, Parnell Campbell … scored 61% of the vote in 1994 in the same constituency as Leacock and by 1998, Labour took the consistency from Parnell Campbell, four years later.

“So Leacock, watch your statistics. Statistics ain’t voting. Is people who voting.   Ah just want give him that reminder,” Gonsalves said.

10 replies on “PM to visit Sharpes in defiance of Leacock”