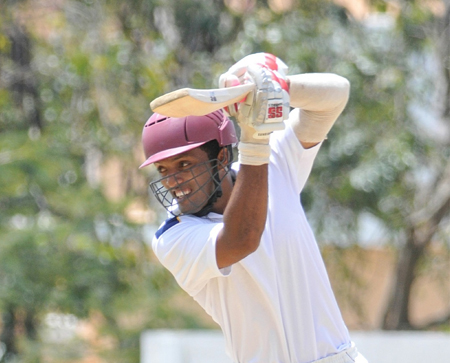 Man of the Match, Romel Currency.

The Sunil Ambris-led outfit completed the feat with a thrilling four-wicket win over Flow Radcliffe in Saturday’s final, an entertaining battle that took place at the main Arnos Vale playing field.

Asked to bat, with the game reduced to 18 overs per innings, an 85-run first wicket stand between Deron Greaves 42 and Romano Pierre 29 set up a more than the competitive total for the 2019 runners up, Flow Radcliffe, as they ended on 139 for 5.

The top wicket taker in the competition, Geron Wyllie, who captured 18 scalps, ensured that Flow Radcliffe did not progress even further, with his returns of 3 for 19 from 4 overs.

Guardian General Saints started their reply disastrously, losing their mainstay with the bat during the tournament, Sunil Ambris for 5 in the 4th overs with the score at 18, at which stage Flow Radcliffe must have fancied their chances. But then stepped in Romel Currency, Ambris’s brother, who played a splendid innings, during which he displayed a range of gears to end on 68 not out from 36 balls, 23 of which he took from over number 16 bowled by Othneil Lewis, that ultimately snatched the winnings from the grasp of Flow Radcliffe. Alex Samuel also added a valuable 24 from 16 deliveries. Delorn Johnson picked up 2 for 28 bowling for Flow Radcliffe.

Asif Hooper, Captain of Flow Radcliffe thought they lost the game in the batting, as he hoped they would have posted a bigger total after being 85 without loss in the 10th over. Hooper however complimented Guardian General Saints for their excellent showing throughout the tournament and in the final on Saturday.

Sunil Ambris, the captain of the winning team commended his young players for the determination and grit with which they played their cricket and said that they are a special group of emerging players.  One of those players, Geron Wyllie, the top wicket taker in the competition noted that his transition from First Division cricket to the Premier level was not that difficult as he is surrounded by an abundance of talent and experience from whom he has continued to learn as he works harder, focusing on doing the basics right.

The man of the match, Romel Currency indicated that at the loss of Ambris’s wicket he realised the bulk of the responsibility would have fallen on his shoulders. He indicated he decided to take some time to get accustomed to the surface then accelerated in the latter part of his innings. Currency went on to note that the victory is dedicated to the late Kentish Jacobs, a former Saints player and cricket coach who was laid to rest on Sunday.