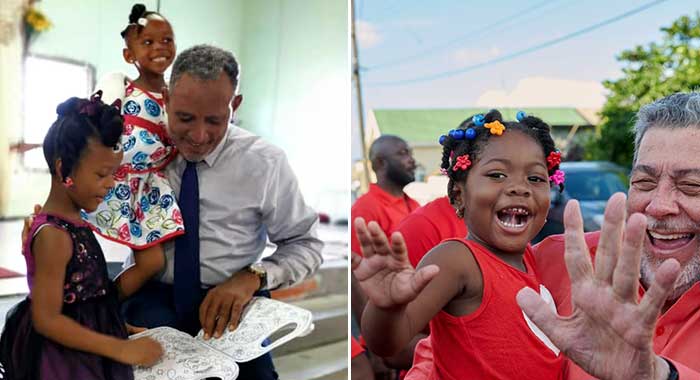 The two major political parties in St. Vincent and the Grenadines, today, Tuesday, nominated candidates to contest all 15 seats in the Nov. 5 general elections.

Electoral officials are yet to comment on the nomination process, but iWitness News was able to confirm with General Secretary of the ruling Unity labour Party (ULP), Julian Francis, and spokesperson for the main opposition New Democratic Party (NDP), Lavern King, that each of their candidates successfully completed the exercise.

Prime Minister Ralph Gonsalves, 74, whose ULP is seeking an unprecedented fifth consecutive term in office, is being challenged for control of the government by Godwin Friday, 61, who is leading the main opposition New Democratic Party (NDP) into a general election for the first time.

“The children are sometimes wiser than some of we. Five in a row for a five star government,” Gonsalves said in a Facebook post that included a photo of him holding a child with her fingers spread in the symbol that the ULP has been using to illustrate is “five-inna-row” mantra.

The nomination process went ahead without challenge to any of the candidates, even as there had been speculation that the ULP was planning to challenge the candidacy of three of the NDP’s candidates.

Friday, who is seeking a fifth five-year term as MP for the Northern Grenadines, travelled by speedboat back to Kingstown, from Bequia, nine nautical miles from the capital.

He arrived around 12:30 p.m. at CW Prescott Primary School, located in the city, where the nomination for East Kingstown was taking place.

There had been talks that the ULP would have challenged the nomination of NDP East Kingstown candidate Dwight Fitzgerald Bramble, on the grounds that he had not been living in the country for six months ahead of nomination day.

However, a legal expert had explained to iWitness News that in addition to other criteria that speak to age, nationality, and literacy, Bramble only needed to be in the country on nomination day, in order to become a candidate.

Bramble, a former national footballer, diplomat and educator, who is an economist, had been living in Canada for some time before returning home to contest the polls.

He will lock horns with the ULP’s Luke Browne, 36, minister of health, and a ULP senator in the last Parliament, who has failed on his two attempts to wrest the seat from former opposition leader Arnhim Eustace, 76, who is not seeking re-election. East Kingstown has remained in the NDP column since 1984 and Eustace held the seat from 1998 to this year.

“This is the day that the Lord has made. Let us rejoice and be glad in it,” a jubilant Friday told NDP supporters outside the school.

“So we have done our official duty we have filed our nomination papers. The next phase of the campaign if to lift the tempo; to do what we have to do to change the government so that we can change the country.”

The opposition leader went on to congratulate Bramble on his nomination.

Asked by iWitness News if the congratulations were not premature, having come ahead of the 1 p.m. deadline by which objections could be lodged, Friday said: “I hear you. Well I’ll congratulate him that time then.”

Among the NDP candidates who completed the nomination exercise was educator Shevern John, a first-time contender, who resigned her post at the Sandy Bay Secondary School on Monday.

The Teachers’ Union, at a press conference Tuesday morning, announced that the Service Commissions Department had refused John election leave.

The department took this position notwithstanding the Court of Appeal ruling against the state in relation to similar situation, in 2010, when the government refused election leave to three teachers wanting to contest the polls on behalf of the NDP.

The teachers were hoping to rely on the 2005 collective bargaining agreement that the ULP administration signed with their union, the relevant section of which Gonsalves later said was “aspirational”.

‘Shevern did what was necessary’

“We know that nothing was going to be easy with this. Shevern put herself forward to be the candidate and as of today, she had to be ready to be nominated. She did what was necessary to do. The rest of the stuff, we will deal with.

“And she was prepared to do it because she wants to be on the ballot today to represent the people of North Windward. The big fight is the one that is coming on Nov. 5. All the rest is technicality.

“And she is ready for it now. She was nominated, she is the first person who called me and say, when she had done her business, she is ready.”

It was noted to Friday that he seemed very upbeat about the election.

Asked if the party had done any polls to measure its likely chances, the opposition leader said:

“I am not going to give you all my strategic information. All you have to know is that we’re gonna win this thing because we are doing all the work. We are not just doing it now.

“A poll just tells you what the situation is. What matters is the work that you have done to convince people that the change that they need that the NDP is the vehicle for that change, that I am prepared to lead that change and that is what the people are seeing and they are coming in droves to the New Democratic Party because they want something different. We want a renewed vibes in the country.”

The opposition leader said that the NDP wants young people to feel that there is hope, “there is possibility of something different, that you don’t have to, every day, watch over your shoulder to see if somebody’s watching when you’re talking.

“What do they think we are? A communist country? We want to liberate this country; we want people to feel free again, energised to go forward to build St. Vincent and the Grenadines. That’s the kind of leadership.”

Friday said that when he became leader of the NDP, some people were criticising his style.

He said that is what his NDP team is offering.

“… and that’s why the people are coming to us. The job isn’t done yet. It is by no mean completed but we are continuing now.”

“This country is too divided and our people have so much talent and so much potential but it just seems that everything is stifled; everything is at a standstill.” He said that even people who profess to be supporters of the ULP intimate to him that the country really needs a change.’ “And if it doesn’t happen now, I don’t know when it will happen again” Bramble said.