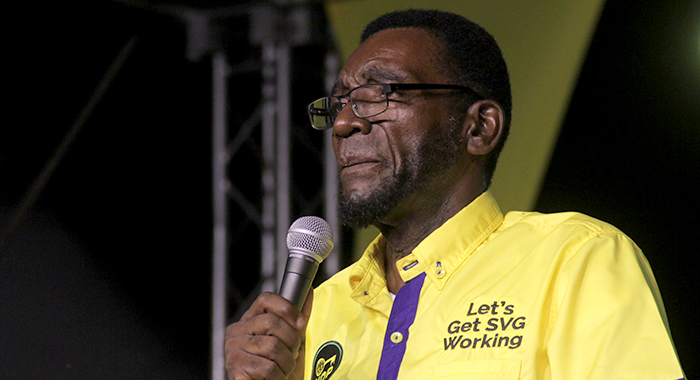 If the state of the roads and community centres in the Marriaqua constituency is anything to go on, then the Unity Labour Party (ULP) has failed the residents of that constituency and should not be voted back into office come Nov. 5.

This was the view expressed by the New Democratic Party (NDP) candidate contesting the seat, Bernard Wyllie, Monday night, at a political rally and office opening.

Wyllie highlighted a list of roads in the constituency which he said are in a deplorable condition and have not been fixed since the NDP was voted out of office in 2001.

“If you want to see something, go to Mt Pleasant, go up to Majorca, the roads up there terrible. Nobody in Mt Pleasant should vote for the ULP; not one soul. When you see the damage that it is causing to your vehicles, shocks, rubbers and all that and they are building roads all throughout the country.”

Further to that, Wyllie said farmers of the constituency have been disadvantaged by the lack of official documents for the lands they occupy — a process he said has been stalled for years by the ULP government.

“This government does not deserve the vote of one single farmer in this valley. The farmers in Montreal who have been occupying those lands up there for generations, up to now they have no title for any piece of land that they have up there. I want to say to you farmers, vote for the New Democratic Party and we will ensure that you farmers have titles for the lands you have been occupying up there for years…

“You go to Farm Road and you will see. The McMillan Road, all those roads that we build for the farmers to make it easy for you to have access to your plantations, they have left them in ruin.”

Wyllie said the plans to transform the Montreal area into an eco-tourism hub have not materialised because of the lack of road access in the area. He added not even public service vehicles are unwilling to drive into that area because of the state of the roads.

He also criticised incumbent parliamentary representative for Marriaqua, Minister of Education St. Clair “Jimmy” Prince, of the ULP, for failing to prioritise the development of sports and culture.

“Can you believe that in Marriaqua, in the mecca of culture, that we do not have a community centre?

When it comes to sporting facilities in this constituency; a couple months ago I said in a broadcast … that Cane End Playing Field is the worst it has been in 25 years. The next two days, they stopped a soft ball competition that was in the semi-finals and they went and throw sand and bricks and they now repairing it after seven and a half years with a broken down wall. The former representative and the one before now saw it and left it there. The young people were crying to give us the blocks, give us the materials and we will fix it ourselves.”

Rather than “five in a row”, Wyllie urged the ULP to “take your four and go” and allow the NDP to take over the reins of the country.