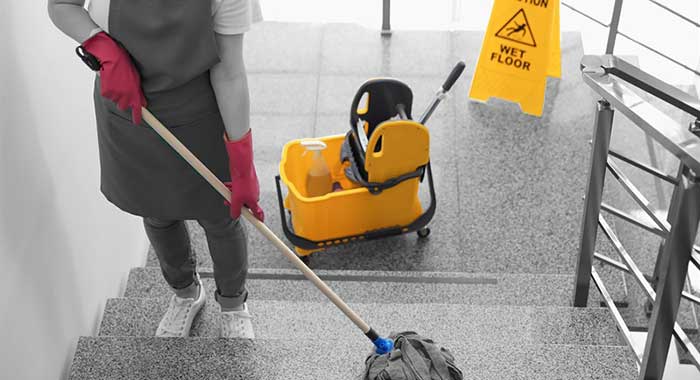 Janitors at schools in St. Vincent and the Grenadines have seen their workload increase as a result of COVID-19 but have not seen any adjustment to their pay packets.

President of the SVG Teachers’ Union, Oswald Robinson pointed this out at a press conference last week, saying it was unfair.

“Another issue we have is the janitors. The government is not paying them enough money. You are asking them to do more work and you are going below the minimum wage,” he said.

“That is ridiculous. And when I talk about these things, people say, ‘He’s political.’ But that is a political issue because you are dealing with socio economic justice…

“You can’t pay people them kind of money and ask them to come in; there are some janitors now, they have to go in in the morning, they have to do it break time, lunch time and in the afternoon.

“You change the people’s working conditions and originally, they were going in after school, doing the work. So they had a little ends to meet to bring in some additional income for their family.”

Robinson, however, said that with the additional cleaning, janitors could no longer pursue a second job.

“You’re asking them to work whole day now, with the same amount of money. That’s slavery.”

Robinson said some janitors were making less then EC$500 a month.

“So we need to get the thing right. We’re speaking for everybody but nobody ain’t see that. What people thinking about is their party. ‘It’s my party; don’t say anything about my party.’

“This has nothing to do with your party and we want to make that abundantly clear. We’re not in any campaigning thing. We’re looking for justice, socio-economic justice and fairness. That’s all we’re asking for,” the Teachers’ Union head said.

3 replies on “School janitors’ workload increases but no pay hike”